I'm trying to learn more about the local birds. I know more than the layperson does, I think, but I'd like to be able to identify most common birds more specifically than "probably a sparrow". I'd also love to be able to identify birdsong without seeing the bird. Mostly for the sparrow-sized birds who like to stand in the very top of the tree, where I can't look at them without the sun in my eyes, and shout musically.

Hi Tired and welcome to BirdForum from all the staff and moderators.

Hi Tired and a warm welcome from me too.

Mostly for the sparrow-sized birds who like to stand in the very top of the tree, where I can't look at them without the sun in my eyes, and shout musically.
Click to expand...

Sooo.... you have that problem too do you?

I'm sure you will enjoy it here and I hope to hear about all the birds you see when out and about.

There were two different birds doing that exact thing this morning. I definitely have that problem. And most of the trees in my neighborhood are pecan trees that are at least half a century old, so these are some large trees.

I also have a pair of bluejays that seem to have decided I'm evil. Every time they see me, they start up with alarm calls, and of course they scare everything else away. They might have seen me holding an injured jay a couple years ago? It had probably hit a window or something, the poor thing was trying to fly but kept sort of skidding along the ground instead. I took it to a wildlife center, but of course the jays don't know that.

Edit: ah, one of my attempted pictures of a treetop bird actually worked! Sort of. It was taken by using a little device that holds my phone with the camera aligned through the lens of my (inexpensive) binoculars, and I just found this on my phone. I didn't think any of those pictures had remotely turned out. 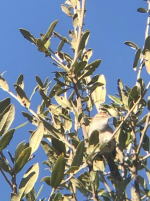 Welcome aboard Tired and enjoy your time with us

Part of the problem is getting the pictures in the first place. I'm not very surprised to learn that wrens are difficult to photograph- I've been trying. Tiny little fellas who move constantly and tend to be surrounded by various foliage and other things that interfere with clear photos. One of my current goals is to get a single really nice picture of a wren- they're so cute. Some of my favorite birds. I love the little tails.

Staff member
Supporter
Hi Tired, and welcome to the forum.
You must log in or register to reply here.

B
Hello from Bristol