I assume this is a 3cy Herring Gull, but struggling to age this bird, as (to me) is has some variable features. Very clean looking bird with no head streaking, pale eye, almost adult type bill. Pronounced tail band. Lots of grey median coverts. 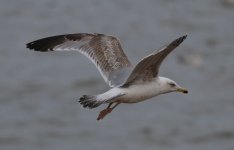 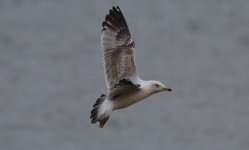 I've also not been able to rule out YL Gull 100% but would expect them to actually have yellow legs at this point.
Last edited: Apr 10, 2021

A date would be helpful please.

It looks like a 3rd cycle (4cy) Herring Gull to me (but I don’t really ‘do gulls’ so I would wait for more opinions) - I see adult inner and central primaries, mirror on p10, clean rump, adult coverts and pale iris as pointers here.
Last edited: Apr 10, 2021
B

location and date please. it's an interesting individual (Herring Gull) that shows only 9 primaries in its left wing. and Deb is right, it should be a 3rd cycle (4cy) due to large white tips to inner primaries and secondaries.

lou salomon said:
...it's an interesting individual (Herring Gull) that shows only 9 primaries in its left wing
Click to expand...

Thanks Lou. I didn’t even notice there was only 9 primaries initially as there doesnt seem to be any moult gaps - so how is this explained? Just during the current moult cycle or a rare permanent fixture?

i can't explain the 9 primaries, Deb. occasionally i have seen posted birds with 11 or 9 primaries, apparently genuine abnormalities and not due to dodgy moult implication. in this bird, i cannot see any sign of primary moult either, there seems to be no moult gap. some large gull taxa (to which HG does not belong) can have arrested moult before autumn migration, classic example is heuglin's gull - in that case you see all primaries in place but clearly divided into two generations. here, the outer 5 primaries look somewhat more immature than the inner 4 (with p4 having a large white tip and even a moon = pale band towards base of the black subterminal band), and p6-10 (that's how they look) look more brown/worn and without a white tip, still p10 has a mirror which indicates it probably still is a 3rd generation primary (in argenteus HG p10 mirror in 2nd generation is rare). this kind of division in wing has been documented in either 3cycle argentatus and 3cycle smithsonianus, just usually with a complete set of 10 primaries!

Thank you Lou for your response - both interesting and enlightening 🙂