Supporter
As we prepare to go to the Alaskan wilderness May 1 on six wheelers for nature viewing, I am kicking around the purchase of 12X42 NL's to accompany the 8X42 NL's I already have for the extra reach. I've looked at the 15X56, and for the 12X stability (especially with the forehead stamp), optics, and smaller size of the NL's, I think the 12's may be the way to go for me. I was just viewing a nesting bald eagle yesterday, and 12X would have been much better.

So my question is, is the 4X gain significant enough for the 12X, or does the 15X just make more sense?

UPDATE: Thanks. Going with the NL Pure 12X42. A lot of factors as well as a re-read of the AllBinos and Roger Vines review conclusions. 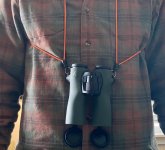 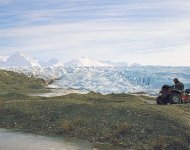 For those wide open spaces I would go with the 15X56 SLC.

I’m in agreement with an observation by Arthur:

Pinewood said:
A rule of thumb is you have to increase the magnification by 50% to notice a difference or benefit from the difference . . . when I carry two binoculars, one is a 6.5x or a 7x, and the other is a 10x . . .
Click to expand...

A jump from 7x to 10x - or from 8x to 12x - is enough to make a significant difference, and so make two binoculars useful, especially where carrying them is not an inconvenience e.g. when using motorised transport

Having said that, in the open spaces of Alaska the 25% greater magnification of the 15x over the 12x would be an even better choice, if you:
a) can hand-hold it steady enough to realise the advantage (perhaps unlikely? - especially so for extended periods)
b) can rest it adequately (in contrast, perhaps a real possibility if using the 6 wheeler as the rest?), or
c) go to trouble and inconvenience of running it off a tripod (certainly so)

Besides the slightly larger EP of the 15x56 (12% more area) most other things besides cost of course favour the 12x42
e.g. size and weight, general convenience and usability, field of view and close focus

- - - -
The out of left field choice would be the Canon 12x36 IS III, with its integral 'electronic tripod'. See both towards the end of Roger Vine’s review of the
NL 12x42, and his seperate review of the Canon at: http://www.scopeviews.co.uk/BinoReviews.htm
. . . though when you’re going to be in Alaska, is the cold likely to be an issue with the batteries?

Although moot for me because of waterproofing and temperature limitations, Roger Vines makes the following notes regarding the 12X NL Pures relative to the 12X36 IS III:

“The Canons are every bit as sharp on axis as the Swarovskis, the Canons are significantly lighter, the Canons have a magic button on top. That last point is the reason for this comparison. The NL Pures unquestionably give a more beautiful view – much wider, brighter, more immersive and free of the false colour that troubles the Canons; even sharper off axis – but hand held they can’t match the resolution of the Canons because they lack image stabilisation. So, for targets where resolution matters more than aesthetics, you might choose the Canons.” 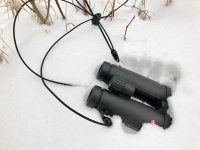 Semi, but it doesn’t matter since it chokes on Alaska cold.

kabsetz lives in Finland and has used his 10x42 IS-L for many years - are Alaskan conditions significantly more harsh?

Patudo said:
kabsetz lives in Finland and has used his 10x42 IS-L for many years - are Alaskan conditions significantly more harsh?
Click to expand...

What I can tell you is that I live well below the Arctic Circle in Wasilla, and even here from October to April Alaska has temperatures that sink below 14° F which Canon says is the minimum temp for use with the 12X36 IS III. The low tonight is 10, tomorrow 7. If I drive 23 miles to Hatcher Pass where there’s a large concentration of wildlife, the low tonight is zero and tomorrow night -2. I’m on the coast, if I drive a little into the Alaska interior 318 miles to Fairbanks, when I get there tomorrow the high will be 12 and the low -2. And it is April not January when it is cold. So Kabsetz and the great nation of Finland aside, Alaska is unsuitable much of the year for the 12X36 IS III.
Last edited: Apr 1, 2021
H

@dwever You have nice binocular harness on you NL Pure, are those available somewhere online?
P

I saw your update and that you were going with the 12x42's and I trust that you've made the best decision.

The difference in magnification is so subjectively perceived and it really depends on what you're viewing and what level of detail your trying to achieve.

Switching back and forth between a 10x42 and a 12x32 is quite noticeable while siting up on a mountain and doing comparison views of the same objects. There's no question that the 12x have an edge and this is apparent even to my less experienced binocular users. While I use the word "noticeable" the difference isn't always "helpful" and the same can be said when switching from a 8x32 to a 12x32. While there's a definite improvement in the amount of detail that can be seen on a distance structure for example, if you're trying to resolve smaller details, like a distant sign, or trying to count the points on an elk at 1000 yards, or seeing bullet holes at a distance, the additional 4x still might not be able to do that. My common, two binocular option is usually the 8x32SV and the 15x56SLC HD used on the ultralight Vanguard VEO 204CB, while seated. My outdooring buddy kind of came to the same conclusion I did after having tried a 8xEL and a 12xSV for a season. He agreed that if he was going to carry 2 binoculars, they should have as much separation as possible in order to avoid too much capability overlap. Sometimes even the 15x's are quite enough if you're trying to judge details on animals at distance, but it's significantly better than the 12x. In typical lighting, I have a lot of difficulty seeing .22 cal holes on black paper at 150-200 yards but they can be viewed without too much trouble using the 15x. So again, it just depends on what level of detail you want/need to see and if the idea is to just get the most beautiful and pleasing, overall image that you possibly can, while enjoying just a little bit more magnification, you might have made the perfect pick.

With all of that stated, the Canon IS and particularly the 10x42 version, will provide significantly more detail while viewing handheld, than either of the Swarovski's. It's just physics. While you can certainly enjoy a huge, perfect overall image while using the non-IS bins handheld, they just can't compare to the IS Canon's when it comes to seeing fine detail in the eye's, feather's, whiskers or individual hairs on an animal. The same goes for reading distant signs, license plates, aircraft N numbers, or when trying to count tightly bunched numbers of objects.

I have a little backyard demonstration that I share with binocular users, where I have them them look at a powerline tower that's about 275 yards away. I tell them to look a the top of the tower where the angles converge and are bolted together with relatively stout 32mm range hardware... and all spaced relatively close together. I ask them to tell me how many bolts are on the main tie, while hand holding any non-IS binocular that I own or they have brought with them. Despite some people being more naturally steady than others, out of about 25-30 people, only one was able to tell me the right answer, which is 12. This happened to be a person with a 12x Ultravid but that's not the point. Then end of the demo has me handing them the "lowly" 10x30IS II $399 (when I purchased mine) and I tell them, "try again with these." Usually it's only a matter of seconds before they say, "there's 12!" .... That's amazing! ... "I see what you're saying" ..."Wow!" and other similar exclamatory language. Obviously, detail is only one aspect of the view but the Canon IS are the kings of seeing detail, while hand holding. For reference, I've owned 6 different Canon IS bins and currently own the 8x20, 10x30II, 10x42 and 12x32.

The great thing is that you always have the option to use a tripod if you need to see the same or even better detail, through the Swarovski.
Last edited: Apr 17, 2021

Supporter
UPDATE: I did not get a 2nd pair of higher power binoculars as planned to compliment the amazing 8X42 NL Pures. I solved my need for higher magnification with the nuclear option. Swarovski ATX 115.

Officially the most I ever thought or believed I would spend on an optic. Gasp. Picture is from the internet since I don't expect delivery until next week. Also have the 1.6X extender but don't think I'll need it. Always thought these would be hard to use, but used a 95mm ATX at Sportsman's Warehouse and found it easy and the image ridiculously good.

The 115 is different than the extender. I want the 115 because of formal and informal accounts of the image quality and brightness. Regarding the part I don't believe I'll use, it is the device that fits between the zoom and the focus that increases magnification 1.6X. I'm not sure I'll ever need that device installed as the scope is already 30X-70X without the 1.6X; but who knows, maybe Jupiter's moons or an eagle's nest at one thousand meters. Anyway, the package I bought is the 115mm objective, the 30-70 eye piece, the 1.6X, the stay on case, and the Swarovski CTH tripod head.

Regarding the BTX, this is a LNIB less-than-a-year old used system from someone well established over at Cloudy Nights and new on this forum. So, that choice was already made for me. Doesn't the BTX lack the ability to zoom?

Below is the seller's photograph showing the 1.6X installed between the focus and the zoom.

In this configuration (I would prefer the PTH head) you should really get the balance rail.

jan van daalen said:
In this configuration (I would prefer the PTH head) you should really get the balance rail.

Thanks! Turns out as you pointed out on another sub-forum, it is the PTH head. As a previous user of spotters and not an owner, I have so much to learn. But I can already tell this will be an incredible partner to the 8X42 NL Pures, and I can't think of a better place for these instrument partners than Alaska where so often you find yourself on one ridge pointed towards another as evidenced by the picture below and any one of hundreds I could of posted.

When I purchased: I was using a warehouse store's 95mm ATX and I was looking from about 75 meters from inside a Sportsman's warehouse aiming to the outside out of a large door. I just marveled that the scope was beautifully resolving tiny mist rain drops out doors. I then refocused about maybe 2/10's of a mile away and I was looking inside the window of an Amish furniture store. I pulled out my phone and called the 115 ATX owner on the spot to ask if it was still available. I Paypalled him within twenty minutes. It is on the FedEx as of this morning.

Thanks as always Jan. I hope that all you do on here results in sales and blessings somehow.

dwever said:
Doesn't the BTX lack the ability to zoom?
Click to expand...

This is where your 1.6x extender comes in...
Congratulations on a beautiful acquisition. I don't know AK; what area are your photos from?

More on the NL Models by Arek and Roger