A few more Mai Po birds over the last couple of weekends...

Both were little more than smash and grab runs on the Boardwalk, but they did provide an opportunity for some nice shots.

Last weekend Murray Lord - visiting from Australia - and who published an account of a trip to New Caledonia recently was a new BF tick. I also had the wierd and wonderful experience of being gripped off by a stunning display of Taiwanese montane endemics and Kagu (on iPad) while enjoying views of Black-faced Spoonbill and Swinhoe's Egret as the tide washed under the boardwalk hide.

Three of the spoonbills were close enough to read the leg-rings, which gave me the chance to photograph three different birds and enter them into the HKBWS database, which tracks this species throughout the flyway.

E35 was ringed on Namjido in S Korea last July and has been recorded nine times since - all in Hong Kong - after arriving on 1st November last year.

E02 was ringed in Suhaam S Korea as a juvenile in 2010. All additional records are from this winter in Hong Kong.


More spectacular than the colour-ringed birds were several adults in full breeding plumage, including this wonderful bird - they are world class birds when the crest is raised! My favourite shot of the day was this group of Black-winged Stilts snoozing as they waited for the tide to drop, but I also enjoyed the look the flat light gave to the ensemble of BW Stilts and a Common Redshank. It looks ideal for a caption competition. Any takers?

As the mud finally emerged the waders that had been roosting inside of the reserve came back in dribs and drabs. Most however did not appear until the tide was well out and they were pretty distant and silhouetted in the flat afternoon light.

Wow those young spoonbills do seem to be wearing a lot of jewelry! The stilts group is my favorite too - the water and reflections are beautiful and with black and white birds it has a pleasing monochrome look, but just a little red to show its a color pic.

The Stilts are also my favourite - I like wide pix - even thinking about making it my Facebook banner.

Today's offering is of one of the two Swinhoe's Egret I saw on Saturday in a flying visit to the Mai Po Boardwalk with my mate Richard. We also had a great flock of 139 Asiatic Dowitchers, and ten Blue-tailed Bee-eaters on the way out of the reserve.

I've decided to revive this thread as my birding is taking me all over the place this spring. Most recently this has included visits to Po Tai and Lamma Islands which would not be covered by any of my other patches.

Lamma was a long hike from Mo Tat in the southeast corner along the southern edge to Tung O, and then over the eastern slope Mount Stenhouse, through Sok Kwu Wan to Lo So Beach and the graveyard in the east-facing woodland and up to Yung Shue Wan for the ferry back to town. The aim was to look for migrants after a few days of easterly winds. That turned out to be a disappointment. The total migrant count was two each of Dusky Warbler and Yellow-browed Warbler - none of them seen - and three Olive-backed Pipits. A pair of Hainan Blue Flycatchers had technically migrated here from wintering elsewhere and the three or four Cattle Egrets wee likewise also migrants rather than residents, but none of these were the migrant flycatchers, thrushes, minuets, buntings and other assorted goodies I was hoping for. There was some compensation on the beach in the form of this fabulous Greater Sandplover which I inadvertently flushed as it was feeding along the tideline at Shek Pai Wan.

Hoping the sand plover would come back I lay down at hedge of the beach and sure enough the bird was curious, and over about 15 minutes made its way along the tideline towards me, passing not eight feet away!


According to asian wader guru Dave Bakewell this is likely an adult female, given the development of the breeding plumage, which would show much more red on the breast in males and a better defined black mask and white forecrown. It's also clear that it has been in this plumage for some time, especially from the worn median coverts.

After my long and unproductive walk up to Yung Shue Wan I did find one more reason to be cheerful - a Pacific Reef Egret that was fishing from a bundle of rocks at the outfall of a nullah. This water was not to put too fine a point on it "nutrient rich" and attracting small fish to feed. The Reef Egret had clearly decided that fishing here should not be a straightforward affair as it froze as close to horizontal as it could watching for the fish to come to the surface.

This was made trickier by the fact that it kept choosing rocks that were mostly submerged so that the larger waves would push the bird right off the rock, caused it to fly up and start again its stalk again.

🤦🏻‍♀️
did it manage to catch something eventually?

Here's the technique - splash dive, thrash out, get airborne, land on on wave -washed rock, and consume: 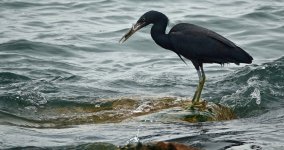 Thank you! But wait, there's more!

I 'm really more of a birder than a photographer, but this outstanding opportunity to get close to a bird performing superbly was just too good to pass up. It also justified my approach that photography offers the potential to liven up an otherwise quiet day! After one of its forays the Reef Egret stopped on a rock to have a good shake and show the full glory of its breeding plumage. 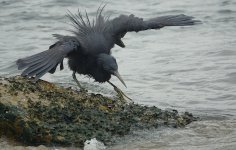 The fun finally came to an end when a couple of dogs strolling along the beach were obviously just that little bit too close, and the egret took itself of to the far end of the beach.

A wonderful day out at Spurn, East Yorkshire