How Many Pairs of Binoculars do you Have? (1 Viewer)

Always have, always will. Just like when I was a child I still find something almost magical about their ability to seemingly bring distant objects so much closer whether it be a star at night or a bird in the day.

I'm a diehard porro man but I'm thinking my next purchase will be a 8x32 roof. When traveling I always take a roof for convenience (wife wears glasses and I don't so the twist up eyecups make things easier) and the roof is usually my 7x42 EDG.

[email protected] said:
Always have, always will. Just like when I was a child I still find something almost magical about their ability to seemingly bring distant objects so much closer whether it be a star at night or a bird in the day.

I'm a diehard porro man but I'm thinking my next purchase will be a 8x32 roof. When traveling I always take a roof for convenience (wife wears glasses and I don't so the twist up eyecups make things easier) and the roof is usually my 7x42 EDG.

What 8x32 roof will you be adding to your collection?
S

Quite a few in my overall collection if I pulled out the various vintage porro's- but these are the main ones in the stable and the ones I use the most:

Also use at times the the following:

10x40 Celestron WA IF (roof)- this is a Zeiss/ Nikon Safari type clone, that is built like a bombproof tank.

And I also have a variety of vintage porro's ranging from a quality Swift 6x30, and a couple real nice Bushnell's on down to medium to fair quality vintage porro's.

stephen b said:
Quite a few in my overall collection .......

Stephen .... I did not see the Swarovski 8X32 EL SV listed. Did you replace it with the new 8X30 Habicht? Also, that is a very nice list of optics!
S

BruceH said:
Stephen .... I did not see the Swarovski 8X32 EL SV listed. Did you replace it with the new 8X30 Habicht? Also, that is a very nice list of optics!
Click to expand...

Did not really replace it with it per say.

I do no longer have the SV's, but do now own the Habicht's. But there is a bit to that story.

Last summer when I bought the 8x32 SV, I fully intended to keep it for a long time. At the time I did the review of the (4) 8x32's that I tested I stated that I was planning on keeping one ( which was the SV) in memory of my Mother that recently passed away. So I did. But, long story- sometime this past December while I was doing some birding behind my house and thinking and letting my mind wonder ( like we, or at least I often do), a few thoughts came to me. One was that I knew I needed to spend more time with my Father this year(who was truly hurting over the loss of his wife of 54 yrs). He lives 800 miles away and knew I needed to plan/ schedule it and pay for some plane tickets. I was planning on about 4 trips to see him and some were going to be with my Wife and family members. Then I started thinking about how much all oft that was going to cost and add up to.

Now mind you, these thought were occurring while I was holding a very expensive binocular- and that realization and the irony of that suddenly was not lost on me. I thought to myself- how crazy is it that I am actually somewhat bemoaning the cost add up of plane tickets to spend time with my Father all while looking through these expensive "hobby" binoculars. Within about a half a day I made a decision that I knew I needed (wanted to actually) to do and followed through with it- I put the Sv's up for sale. They sold within a half a day and within 2 days I scheduled and paid for 3 different trips to see him ( one of which is this coming weekend ). And I never regretted that decision for a moment. I figured that spending time with my 81 yr. old Father was more important than any hobby.

Even though I did not regret the decision, I have to admit I missed the view of the SV a little bit. After securing the plane tickets- a few months later I ended up buying a set of the 8x30 Habicht's after thinking about it for a while. And the review I did of the Habicht's and the 8x32 SV was actually done with a friends SV who purchased them last fall after liking mine so much.

So the Habicht's came a few months after selling the SV's, not actually a replacement for them. Although they do very nicely I must say, and I am more than content with their view. I believe I am all done with any binocular buying for a good long time. I really do not see anything out there that I either need nor covet.

Time may tell how that goes. But actually, except for the Habicht's, most of my binoculars currently I have had for a good long time- and I am satisfied with what I have.
C

Steven .... Thank you for filling me in on the background behind the SV. I understand completely.

I received a 7X42 today and it had me thinking of my father quite a bit. He was very opinionated and felt that was the only size to have. I thought for a while there that he was going to disown my brother and me when he found out we bought some 10X42 models! The memory of those discussions was one of the reasons for getting a 7X42.

I hope you have an enjoyable time this weekend with your father. You can always get another SV if you so desire.

stephen b said:
I figured that spending time with my 81 yr. old Father was more important than any hobby.
.
Click to expand...

How true. Things like a career, money or other worldly goods cant hold a candle to family and lifelong friends.
S

I am still new to birding, so I depend on two pairs:

And I'm considering adding a pair of Yosemites...

"I was gratified to be able to answer promptly, and I did. I said I didn’t know." - Mark Twain. In this case, "promptly", not quite, but "gratified", I should imagine! (Personally, I like to possess the minimum, and am finding it hard to decide on a set of three, even incl. two for quirky reasons.)

Don't ask!
See my collection below for the answer, but close on 350 pairs.

Interesting thread. I really have only moved two binoculars on. A 1970 Sears 7x35 was donated and my daughter has the Nikon 6x18 Look bins.

1. Celestron 15x80. These are likely Vixen.
2. Celestron 9.5x44 ED. These are branded Eagle Optics and are Vixen too. Great for nightime viewing of the sky.
3. Unitron 8x32 Pro. Also Vixen origin and identical to the Celestron Ultima.
4. Nikon 12x40 WF. Fine images but the magnification makes it a special purpose glass.
5. Nikon 10x35 EII It's all been said before.
6. Nikon 8x30 EII. As above. If I had to keep one this would be it.
7. Swarovski Habicht 6x30. A 1991 model that delivers wonderful images. The low power and big exit pupil make it good for introducing grandkids to bunoculars.
8. Nikon 7x26 8.6 From 1976 it appears designed to compete with german roofs. As with other older roofs the image suffers in comparison with porro prism bins and newer phase coated roof bins.
9. Nikon 8x24 Look bins. From 1970 this reverse porro delivers nice images.
10. Nikon 6x15 This reverse porro celebrates a Nikon anniversary and is an updated reissue of the ultra compact design popular in the '50's. Nice images and about as small as bins can get.
11. Nikon 5x15 Titanium A modernistic roof prism design again with excellent images. The titanium is a bit slippery to hold.
Last edited: Aug 14, 2013

Here are the ones I have photographed up to now

Gary I love the Red Leica binoculars!! What a collection!

Simon S said:
Don't ask!
See my collection below for the answer, but close on 350 pairs.
Click to expand... 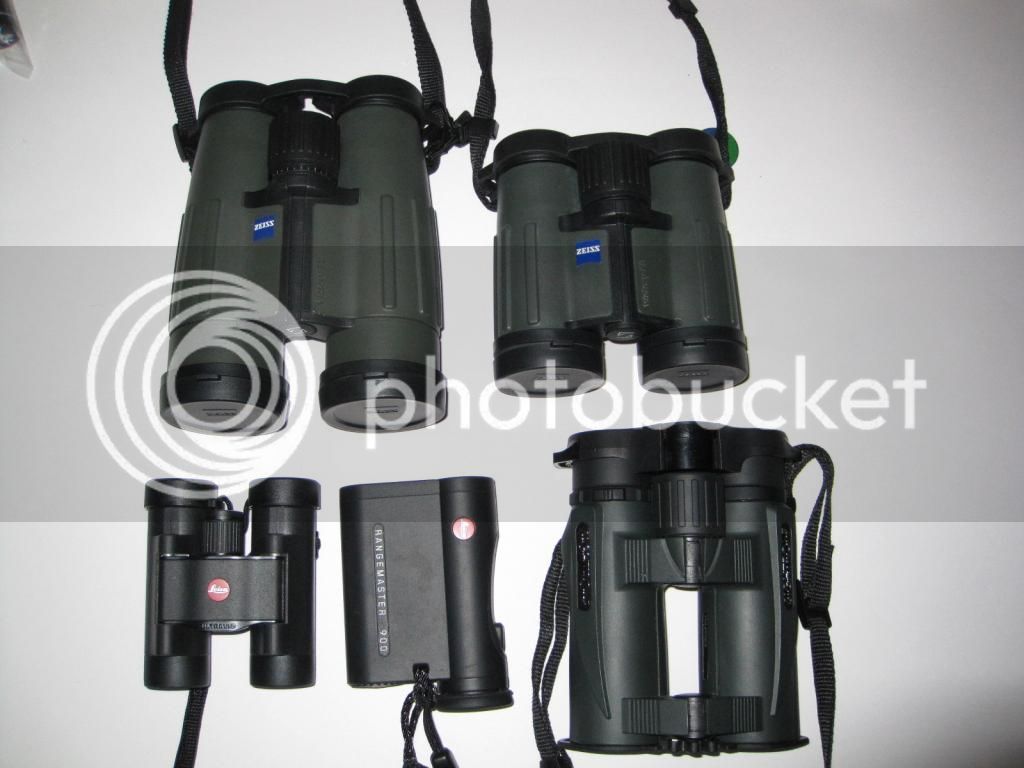 You must log in or register to reply here.

P
How much time do you spend looking *for* binoculars?

R
Looking for a 2nd pair of Binoculars