How many types of Porro prisms? (1 Viewer)

Some websites describe Porro binoculars as having Porro I prisms.

I understand a Porro II prisms system exists. It is used in binocular production or is just an experiment?
Must one care about?
Last edited: May 12, 2022
M

Is this what you are calling “Porto II”? 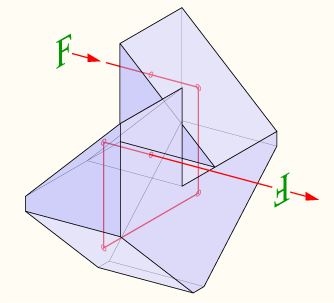 Most (maybe all) Canon IS binoculars use Porro II, as does the Zeiss 20x60 IS. I think some other IS binoculars do too. Also some very large marine/astronomical binoculars.

Maljunulo said:
Is this what you are calling “Porto II”?
Click to expand...

Starting in the early 1850’s, Ignazio Porro experimented with using triangular prisms to correctly orientate an image when viewed through a telescope *

Then in 1854 he patented two ways in which to use 4 right angle reflections to erect an image - what we refer to as Porro Type I and Type II prisms.
For more detail see post #28 and on at: New Horizons II

The Porro Type I image shows the first pair of reflections inverting the image, and then the second pair reversing it.
Not only do the number of reflections matter, but also the orientation of the reflective surfaces in relation to each other
e.g. when a Noblex monocular is folded flat for carry or storage the image is neither inverted nor reversed.


* As shown in an image from Swarovski, in a terrestrial viewing device such as a telescope or binocular:
a) the objective both inverts the image (top-to-bottom) and also reverses it (side-to-side);
b) the prisms are then used to correct both the inversion and reversal, and;
c) the eyepiece then magnifies the image to be viewed.

Although the image uses a 6 reflection Schmidt-Pechan roof prism, a Porro prism acts exactly the same.
And alternatively, lenses can be used to accomplish the inversion and reversal, as is routinely done with telescopic sights.


p.s. See an alternate view of a Porro Type II prism. It shows more clearly how the reflection pattern is the same as that of a Type I prism.
It’s from post #30 in the above link.

Axial Offset
The most notable difference between Porro Type I and II prisms, is the degree of offset to the optical axis of the external light column.
With all other factors being equal, a Type I prism has 40% more offset than a Type II one. See the images and explanation in post #15 at Perger Prisms
The less offset of a Type II prism allows for a less bulky binocular.


Orientation of the Prisms
Where there is noticeable axial offset to a prism, a binocular designer can use the offset in a number of ways
i.e. the objective axes can be variously orientated - outside, inside, above or below - the eyepiece axes.
See some examples in the above link, and some more in post #10 at: High end porro's


Porro Type I
Most Type I prisms are fabricated in two pieces as shown in the image in the previous post, and then mounted with an air gap between the two.
In addition to the exceptions mentioned by Frank where the two pieces are cemented together, another is the Swarovski SL.
See the illustrations and particulars in post #6 at: Swarovski SL porro models

In relation to Ted’s title for this thread "How many types of Porro prisms?" . . .
Besides the Porro Type I and II, there is also the 'Perger Porro prism' mentioned by Henry in post #3.

In 2010, Andreas Perger patented 4 versions of a non-roofed 4 reflection prism, for use in optics such as binoculars.
See the US version of the patent and details in posts #8 and 9 at: Perger Prisms
(there are 4 versions of the design, not 3 as I previously indicated).

As indicated in the opening Abstract, Perger considers his prism a variation of the Porro Type II prism.
However, only two of the Perger versions have all right angle reflections like Porro prisms i.e. the versions in Figures 1 and 2.
And it seems that the version in Figure 3 is the one that’s used by Leica in their Geovid models.


So it would perhaps be more precise in terms of characteristics, if we distinguish between:
• roof prisms (most commonly the Schmidt-Pechan and then the Abbe-Koenig * ), and;
• non-roof prisms (comprising the Porro Types I and II, and the Perger version used by Leica).


* with others including those shown in post #33 and 34 at: New Horizons II

As far as I know Zeiss, Ross and Barr & Stroud were the only manufacturers ever to cement a field lens to a Porro II prism in order to reduce the number of air/glass surfaces thereby increasing light transmission and reducing stray light. The Zeiss examples were mostly 7x50’s and marked H for Helligkeit (increased brightness) but discontinued in the late 1930’s after anti-reflective coatings began to be applied. During WW II, though, Ross and Barr & Stroud manufactured many 7x50 Porro II binoculars with this construction as well as commercial ones after the war. The post-war Ross army Mk V 5x40 Porro II also employed a cemented field lens. Huet and BBT Krauss made many Porro II binoculars as well but not with the field lens cemented to the prism.
Last edited: May 15, 2022

To illustrate the observation in post #6 - that the 4 reflections of a Porro prism be need to be correctly orientated in relation to each other -
see a front and side view that shows what happens when the orientation in a Type I prism isn’t correct
i.e. the image is neither inverted nor reversed, it’s merely transmitted through the glass as is.

It’s from: Binocular prisms - why are they so weird and different? -