About 2 years ago, I started the Avian Hybrids Project, a website gathering the scientific literature on hybridization in birds. This project is still ongoing and I am writing weekly blogposts on avian hybrids. But I am always looking for more!

So, if you have publications on bird hybrids in local magazines or you noticed that I missed something on my website, please let me know. I am also looking for nice pictures of hybrids (you will be credited). And everyone is welcome to write a guest post. Feel free to contact me through the website.

Regarding Paradisaeidae, have you checked Errol Fuller's books "The Lost Birds of Paradise" (1997) and "Drawn From Paradise" (2012)?

And regarding Trochilidae, have you seen the following paper about Heliangelus zusii?

I hope this may be of some help.
T

I agree an interesting project. What about Cox's Sandpiper?

Hybridization is not always limited to two species; often multiple species are interbreeding. In birds, there are numerous examples of species that hybridize with multiple other species. The advent of genomic data provides the opportunity to investigate the ecological and evolutionary consequences of multispecies hybridization. The interactions between several hybridizing species can be depicted as a network in which the interacting species are connected by edges. Such hybrid networks can be used to identify ‘hub-species’ that interbreed with multiple other species. Avian examples of such ‘hub-species’ are Common Pheasant (Phasianus colchicus), Mallard (Anas platyrhynchos) and European Herring Gull (Larus argentatus). These networks might lead to the formulation of hypotheses, such as which connections are most likely conducive to interspecific gene flow (i.e. introgression). Hybridization does not necessarily result in introgression. Numerous statistical tests are available to infer interspecific gene flow from genetic data and the majority of these tests can be applied in a multispecies setting. Specifically, model-based approaches and phylogenetic networks are promising in the detection and characterization of multispecies introgression. It remains to be determined how common multispecies introgression in birds is and how often this process fuels adaptive changes. Moreover, the impact of multispecies hybridization on the build-up of reproductive isolation and the architecture of genomic landscapes remains elusive. For example, introgression between certain species might contribute to increased divergence and reproductive isolation between those species and other related species. In the end, a multispecies perspective on hybridization in combination with network approaches will lead to important insights into the history of life on this planet.

The rate of hybridization among taxa is a central consideration in any discussion of speciation, but rates of hybridization are difficult to estimate in most wild populations of animals. We used a successful citizen science dataset, eBird, to estimate the rates of hybridization for wild birds in the United States. We calculated the frequency at which hybrid individuals belonging to different species, families, and orders of birds were observed. Between 1 January 2010 and 31 December 2018, a total of 334,770,194 species records were reported to eBird within the United States. Of this total, 212,875 or 0.064% were reported as hybrids. This estimate is higher than the rate of hybridization (0.00167%) reported by Mayr based on impressions from a career studying museum specimens. However, if the 10 most influential hybrid species are removed from the eBird dataset, the rate of hybridization decreases substantially to about 0.009%. We conclude that the rate of hybridization for individuals in most bird species is extremely low, even though the potential for birds to produce fertile offspring through hybrid crosses is high. These findings indicate that there is strong prezygotic selection working in most avian species.

Interesting reports. Thinking about their reports, there is a weakness in detecting hybrids of some species pairs (identifying pure Empids are difficult enough, making a guess that one is a hybrid even more difficult). But it must also come down to "what is a species?". In Europe, the largest number of hybrids I have personally seen was of Crows. If they again become defined as one species, that is a lot of hybrids that no longer are inter-species hybrids.

No need to invoke Empidonax! A female or juvenile hybrid of two common Anas ducks is more likely than not to be overlooked in the field. Field observations should report bird hybrids much less often than the skilled ornithologist Mayr examining specimens in hand.

38 times higher relative frequency of hybrids in the 2000s might be a measure of splitting of subspecies into species in the recent years. Hooded and Carrion Crows were considered one species in the past.
Last edited: May 7, 2020

njlarsen said:
But it must also come down to "what is a species?".
Click to expand...

Well, sort of. Where I live we have the Northern Flicker, which comes in Red-shafted and Yellow-shafted varieties (which are subspecies groups). And there are hybrids between individuals of those two groups, which are generally referred to as "intergrades". Recently all three types have appeared in my yard in winter.

At least, that's the case if you adhere to the eBird/Clements or IOC taxonomies. But if you prefer the BirdLife International taxonomy, then the two groups are two species and there are hybrids between the species. There's not much difference really.

I assume Handbook of Avian Hybrids of the World is known?

Hybrids with different combinations of traits can be used to identify genomic regions that underlie phenotypic characters important to species identity and recognition. Here, we explore links between genomic and plumage variation in Blue-winged Warbler x Golden-winged Warbler (Vermivora cyanoptera x V. chrysoptera) hybrids, which have traditionally been categorized into 2 discrete types. “Lawrence’s” hybrids are yellow overall, similar to Blue-winged Warblers, but exhibit the black throat patch and face mask of Golden-winged Warblers. “Brewster’s” hybrids are similar to Golden-winged Warblers, but lack the black throat patch and face mask, and sometimes have yellow on their underparts. Previous studies hypothesized that (1) first generation hybrids are of the Brewster’s type and can be distinguished by the amount of yellow on their underparts, and that (2) the throat patch/mask phenotype is consistent with Mendelian inheritance and controlled by variation in a locus near the Agouti-signaling protein (ASIP) gene. We addressed these hypotheses using whole genome re-sequencing of parental and hybrid individuals. We found that Brewster’s hybrids had genomic hybrid index scores indicating this phenotype can arise by majority ancestry from either parental species, that their plumage varied in levels of carotenoid pigmentation, and individuals captured in multiple years grew consistently less yellow over time. Variation in carotenoid pigmentation showed little relationship with genomic hybrid index score and is thus inconsistent with previous hypotheses that first generation hybrids can be distinguished by the amount of yellow in their plumage. Our results also confirm that variation near ASIP underlies the throat patch phenotype, which we refined to an ~10–15 Kb region upstream of the coding sequence. Overall, our results support the notion that traditional categorization of hybrids as either Lawrence’s or Brewster’s oversimplifies continuous variation in carotenoid pigmentation, and its inferred underlying genetic basis, and is based primarily on one discrete trait, which is the throat patch/mask phenotype.

Estimates suggest that about 16%of bird species hybridize in the wild. This number is based on two main sources: the Handbook of Avian Hybrids of the World by Eugene McCarthy and the online Serge Dumont Bird Hybrids Database. Although both sources provide supporting references for the documented hybrids, the reliability of these references has not been systematically assessed. In this paper, I introduce a scoring scheme based on three criteria that are weighted based on their reliability, namely field observations or photographs (1 point), morphological analyses (2 points), and genetic analyses (3 points). The final tally of these three criteria (ranging from 0 to 6 points) will indicate the level of confidence for a particular hybrid. I test this scoring scheme on the Neotropical bird family Tinamidae (tinamous), in which several putative hybrids have been reported. My analysis revealed one welldocumented case (Crypturellus boucardi × C. cinnamomeus) and three doubtful records that require further investigation. These findings highlight the need for thoroughly scrutinizing the sources supporting avian hybrids. The scoring system clearly illustrates its usefulness and can be easily applied to other taxonomic groups to increase the reliability of documenting interspecific hybrids.
S

Jente said:
I am also looking for nice pictures of hybrids....
Click to expand...

Don't know how nice they are but here's my photos of a Bullock's x Baltimore Oriole Hybrid: 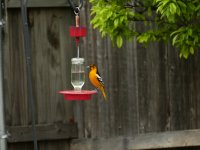 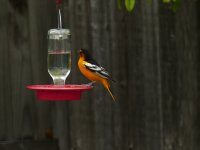 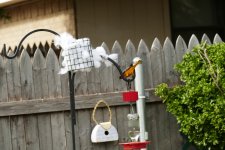 Last year, September 2020, I had another male BUOR x BAOR on the feeder; the photo was a tad bit blurry but I still have it.

As I understand, taken from Sibley's, only the males are identifiable by their "oddly plumage". The inference seems be "a confusing array of intermediate plumage" attributed to the different molting times(?); BUOR during or after migration (Sep-Nov), BAOR on the breeding grounds (Jul-Aug).

From my photos, the oriole's "oddly plumage" is found on the head, coverts, and scapulars(?). The tail maybe another indicator but the photos appear to lack evidence.....black showing at the undertail coverts?

Correct me if I'm wrong.

Taken from your Icteridae page, here's the distribution map of the BUOR/BAOR with my location; the blue dot in the yellow area of the map, which happens to be near the middle of the Central Flyway. 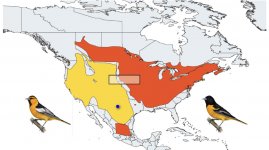 Elsewhere, on the subject of species, Jente included a video titled "What is a Species?" in his blog post; The Herring Gull Complex is not a ring species. The video is # 13 in the Crash Course Zoology of the CrashCourse series. Thought it was worth posting here.......maybe other neophytes, such as myself, are in need of an education. A good taxonomic primer?

In the birdforum gallery there is a section named Albinos and other odd birds. There is likely to be a few reports of hybrids in there. The Id forum also have questions about possible hybrids with some regularity.
Niels
S 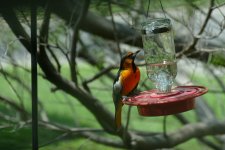 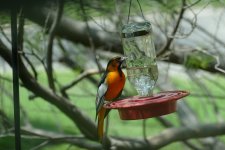 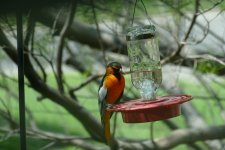 Apr 11, 2022
albertonykus
A
G
Campaign to standardise the capitalising of English names of species
3 4 5

T
Hello from The Royal Town