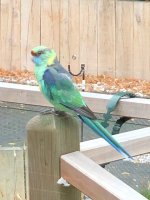 It's just a flesh wound.

Ask him his name. I found a parakeet in the late 1970s. Nobody claimed it, so we kept it. After several months someone asked him if he was a good bird. He responded with "Chipper's a good bird". He had never spoke before, but apparently the question triggered his response.