Dear all, hope you are well and successful
I just sign in the birdforum , which I believe it is a great opportunity to me and few other birders still birding in Iraq. I feel it is a great chance to have your views and comments about my requests hoping to be a light guest to you.
I will started by this finding in center of Iraq
On 1st of September 2011 I was able to observe the reed warbler sp. ( attached in the pictures ) in date palm trees and fruit orchids in Baghdad in center of Iraq as the reed warblers start moving at this time of the year via the central of Iraq.
The bird exhibited the fallowing features which I noticed obviously, short and rounded PP with 6 feathers projected only (IMG_0529 and IMG_0530). 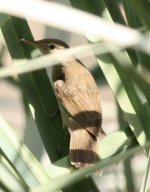 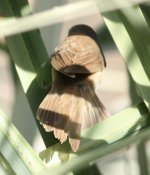 Long bill which it is different of the Marsh Warbler and Eurasian Reed Warbler which I have experienced with both. Plain and uniform color of the upperparts and upper tail coverts. Less contrast in tertiles centers and alula. Long tail (IMG_0530),

Wide lore in front of the eye. Whitish and clear under parts and flanks with small smear of grayish on the side of the chest. Dark grey legs, tows and claws. Also its obvious was distinctive too. Harsh “geez, geez” which it is only what I heard. And I was able hopefully to gain the “banana” pause in (IMG_0543) 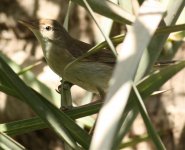 . According to this notes I IDed the bird as 1st winter Blyth’s Reed Warbler.
I ‘m tending to submit this record as the 1st record for Iraq and I was able to record the Eastern Bonill’es Warbler, Mountain Chiffchaff for Iraq and I hope to have this species as well.
It has recorded in around neighboring countries and it is likely to occur during migration in Iraq
So, your view will be most essential and I’m looking forward to see it.
Thank you indeed for your help and support
Omar

P.s
May some thoughts suspect this to Be a Basra Reed Warbler. I have a long experience with BRW published in a paper in Sandgrous 2007, and most of the species information in breeding grounds in Iraqi Marshes was submitted by me to the Bushes and Reed Warbler Book.
Obviously the size and length of the body, Shape of the head and length of the bill , Face pattern, PP, coloration , sound and habitat id sharply differ from the species attached. 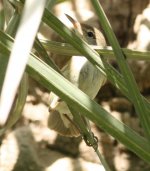 Omar Hi,
Your bird is certainly an Acro...and appears to have as you have suggested a short pp (perhaps only 50% of overlying tertials)...It looks like a good candidate..a view of the emarginations (on 3 and 4) if possible would be helpful.
cheers

I'm going to stick my neck out and say Paddyfield with that pale eye..pinkish legs and lower mandible, striking super with traces of black and short pp.

I think paddyfield can be ruled out for several reasons:
-the super isn't broad/contrasting enough
-the lower mandibule isn't dark tipped
-the tail looks rather short
-overall coloration is very dull and uniform

The emargination on P3 is visible on at least 2 images and it's too close too the wing tip for agricola.
Blyth's has normaly P3 and P4 emarginated, I don't see an emargination on P4 but after looking at many pictures on Tarsiger.com it appears that this emargination is not obvious at all on many images!
Another pointer would be the alula colour, but it's not so clear on the photos...
All in all it looks like a good candidate for Blyth's to me too with this short primary projection...But it would be good to get the opinion of an expert on this case I guess.


P.S: By the way the plumage looks worn so the bird is unlikely to be a 1st year.
And Omar you can listen to some Blyth's voice recording on xeno-canto.org
Last edited: Sep 16, 2011

I'd be pretty sure that its either Blyth's or Large-billed Reed warbler.
Last edited: Sep 17, 2011

Secondly based on the images I'd be reluctant to conclude it is too short for Paddyfield, though clearly the bird is in molt.

Thirdly the supercilium looks quite broad to me and fairly contrastingly white, although rather obscured due to light or obstructions in the pics. Merely my perceptions.

Lastly the bird to my eyes looks quite richly brown in tones to me compared to the Blyth's Reed. Bright sun can make birds that are richer in the field seem more washed out. Paddyfield can often appear quite uniform in plumage tone.


Tib78 said:
I think paddyfield can be ruled out for several reasons:
-the super isn't broad/contrasting enough
-the lower mandibule isn't dark tipped
-the tail looks rather short
-overall coloration is very dull and uniform


I hasten to add that I can't argue with the points made already, but can say that I don't see all the same ID features that you used to rule out Paddyfield

I agree regarding the emarginations which most likely make this bird a Blyth's Reed. I'm just intrigued by those pale legs.

The emargination on P3 is visible on at least 2 images and it's too close too the wing tip for agricola.

Blyth's has normaly P3 and P4 emarginated, I don't see an emargination on P4 but after looking at many pictures on Tarsiger.com it appears that this emargination is not obvious at all on many images!
Click to expand...

lostinjapan said:
Hi Tib..the dark tip on the lower mandible is a clincher according to the books, but from images online I've found several Paddyfield Warbler images that seem to show birds without the dark tip. Likewise Blyth's Reed Warbler according to the literature always show dark legs and from images only a few show paler legs and the bird in question shows pale legs.
Click to expand...

and don't forget just how many LBRWs have been found in museum collections misidentified as BRW.

Jane Turner said:
I'd be pretty sure that its either Blyth's or Large-billed leaf warbler.
Click to expand...

Agree! And this one has quite a long bill IMO. As well as this one (only October record of Blyth's in Finland...)

Concerning the dark tip to the bill....I've been party to 3 BRW's, this was not a noticeable feature for any!

Concerning the paler legs....this is not set-in stone...I've seen RW with grey brown legs and paler warmer legs as with WW and CC.

These features are only problematically useful within a ''suite''.

I've only seen one definite PW...and that had a distinct pale super with a contrasting dark upper edge, and a shorter pp than is shown with this particular bird.

mäkpe said:
Agree! And this one has quite a long bill IMO. As well as this one (only October record of Blyth's in Finland...)
Click to expand...

It would be good to know more about what it was doing - its been suggested that nervous tail flicking (opening and closing) is a character of LBRW. Iraq isn't too far from the known breeding grounds either.

It does look quite long legged and long-tailed too in the photos - what we really need is a shot of the bill from above or below.

Compare with this adult paddyfield (august): http://www.tarsiger.com/gallery/index.php?pic_id=Soiska1280680538&lang=eng
You must log in or register to reply here.