John A Roberts said:
In relation to the posts above, some images of devices with significantly altered stereopsis compared to regular Porro prism binoculars:

a) When Zeiss commenced production of Porro prism binoculars in 1894, they also offered a handheld Stereo Telescope, aka a Relief-Fernrohr
(it uses a variation of the Porro Type II prism, with one of the four right angle prisms located at the front of the objective) *

b) While the above never saw much civilian use, by 1904 it had been enlarged and was used in mounted form for military use.
See an image from a catalogue by Cassidian Optronics (the catalogue from 2012 is titled Handheld Targeting Systems,
and on the front page it indicates 'Optics by Carl Zeiss').

c) Enhanced stereopsis was essential to the operation of coincident image rangefinders (aka telemeters).
Depending on the task they went all the way from handheld sizes, as shown in the Cassidian image; to as Bill indicates those for shipboard use.
See an image from 1912 at: USS Nebraska Naval Ship Cover 1912 From Ship Post Master Range Finder RPPC | Topics - Transportation - Boats, Postcard

d) And the Pentax Papilio reverse Porro prism binocular uses significantly altered stereopsis in a different way.
To achieve a minimum focus of only 50 cm/ 20 in, the objective lenses in each barrel move closer together.
See the images in post #4 at: Where are the aspherics?


And finally, there were not only stereo enhancements to vision! See an image from: https://mobile.twitter.com/beidaihebirder

I believe those trench periscopes are known as "donkey ears." Do you recall the minimal focussing distance and how natural was the view at its minimal distance?

It was several years ago and I don't even recall the country of manufacture. The viewing distance among trees was perhaps 10-20 m.
OT, but the owner also had a catadioptric 30x60 Zeiss spotter with the motor-driven focussing, probably 1980s vintage.
My scope then was a Zeiss Diascope 65, which unsurprisingly trounced the catadioptric for contrast.

henry link said:
Do we see an exaggerated "3D" with Porros or diminished "3D" with roofs?
Click to expand...

First, let me thank you for your extremely valuable post (#1). This is the only kind of content that interests me these days: how looking through magnifying optics affects our perception of space.

The exact technical answer to your question is that both models provide diminished stereoscopic effect for far objects. In other words, binoculars deliver L and R images whose stereoscopic parallax does not match the dioptric distance of the images seen through the eyepieces. As a result, binoculars create vergence-accommodation conflict in the human eye.

If we assume that objective-side IPD is same as eyepiece-side IPD (e.g., roof-prism binoculars), then parallax between left and right images is amplified proportional to M (magnification). This is approximately similar to the object being viewed from a distance which is M-times closer. However, in an afocal telescope, the virtual image is formed at a distance which is M-squared-times closer than the object. This creates a conflict between the required eye convergence angle and eye accommodation.

L-R Parallax: amplified M-times and further multiplied by the ratio of objective IPD to eyepiece IPD if applicable
Accommodation demand: amplified MxM-times then a constant value (depending on focus knob position) is added to it or subtracted from it.

Resolving the conflict between accommodation (eye focus) and parallax (eye convergence) requires that the objectives are separated M-times larger than the observer's IPD. A stereoscopic viewing condition in which parallax and focus are consistent is called "Ortho-stereoscopy". It is discussed very rarely in texts. There is a brief review in Le Grand (Form and Space Vision, 1967) on page 312 just before he ends his book on page 313. The formula there is consistent with my own calculation that ortho-stereoscopy in binoculars requires M-times larger IPD on the objective end. For a 10X binocular, this require approximately 65cm separation between the objectives (obviously not practical).

Effect of Focus: Technically, an observer can use his focus knob to push the virtual image back and put it in a location that is consistent with L-R parallax between the two barrels. But my experience shows that we don't seem to do/like that. In other words, we seem to prefer the virtual images to be dioptrically close (around 1D) and we tolerate lack of proper parallax. Similarly, the bi-ocular view through the BTX stereo eyepieces connected to a Swarovski spotting scope offer [nearly] zero L-R parallax. Yet observers find the view nice and pleasing.)

Is Orthosterioscopy desirable? It is possible that somehow parallax is not associated with our view of large and far landscapes. If we add correct amount of parallax, the magnified landscape somehow loses its grandeur and might feel "small" (doll house effect you noted). I would like you and Binastro (+ elkcub + others with knowledge) to please comment on this.


Other Perceptual Effects: As you noted through your careful observations, the size minimization effect which is caused by pronounced L-R parallax may not be pleasing to binocular users. A more pleasing "3D feeling" seems to be evoked by the extremely shallow depth of field of high-power binoculars. There are many other perceptual effects which are not captured in the one parameter (magnification) which we use to describe the effect of looking through binoculars. Several of those were mentioned by Binastro 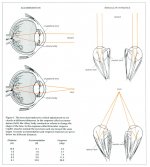 Omid said:
Technically, an observer can use his focus knob to push the virtual image back and put it in a location that is consistent with L-R parallax between the two barrels.
Click to expand...

Is the focuser in a 10x binocular really capable of increasing the image distance by as much as 10x?

I see that fatigue due to "vergence-accommodation conflict" is a big problem in virtual reality design. But VR headsets have the user focusing on a display screen attached to their face, which is very different from using an optical instrument. (This conversation begins to remind me of your imagining binocular images as if presented on a little display in a previous thread...) And it probably doesn't help that VR objects are often in "motion".

I don't find a good binocular fatiguing at all.
B

I think that different people are likely to perceive images differently, both as groups, say aboriginal Australians and as individuals.
What we see is likely learned by our individual circumstances.

I see a 2 times magnified image by holding my distance glasses 8 inches in front of my eyes.
With greatly increased stereo also.

The full Moon in my 20x60 binocular is seen in very good stereo.

My 12.5 inch Dall Kirkham was used to measure object distances up to a mile by reading off the eyepiece movement scale.

The Geiranger Fjord viewpoint is magnificent.

But with unaided eyes or probably just with one eye.

With a binocular I don't think the view is that great, although I cannot remember if I used my binocular.

Even with an extra wide angle binocular, I doubt that the view is that great.

henry link said:
In other words do we see an exaggerated "3D" with Porros or diminished "3D" with roofs?
Click to expand...


I think it's exaggerated.
Seeing depth between your nose and 2 meters is done by stereopsis. In a natural way without binoculars we dont use stereopsis anymore when looking to an object further away than a couple of meters. The two images perceived by the different eyes are almost the same and the brain can't detect the difference anymore by using stereopsis.

We use 2 other ways to see depth:

-Parallax: When driving the trees near you move faster than the sun far away.
-Overlay: You can see that a big tree far away is hiding behind i.e. a building.

Stereo vision works for people with very fine acuity up to about 600 metres when viewing a background sky much further away.
Without optical aid.

I clearly saw in stereo at 100 metres on a regular basis, even without a very distant background.

Binocularbirdfreak said:
We use 2 other ways to see depth:

-Parallax: When driving the trees near you move faster than the sun far away.
-Overlay: You can see that a big tree far away is hiding behind i.e. a building.

The human eye only uses the stereopsis for nearby objects. Because the difference for the image received in each eye is more different looking to nearby objects.
Click to expand...

Offhand, here's a few more visual cues for depth that are not stereo based:

-Atmosphere: Contrast and color shift as objects move further away from the viewer.
-Depth of field: Our eyes don't focus from a few inches to infinity simultaneously. At least mine don't. Consequently there is a division between the foreground and background. One will be softer than the other depending on where the eyes are focussed.
-Perspective: Alike objects (telephone poles, for example) and non-alike change size as they recede into the distance

Keep in mind that these effects can be bold or very subtle. Like Binastro, I also think that all these cues are 'learned', not innate.

Non stereo depth indicators have been used in painting for centuries, if not longer (as well as photography and film)

Binastro said:
I see a 2 times magnified image by holding my distance glasses 8 inches in front of my eyes.
With greatly increased stereo also.
Click to expand...

I'm wondering why the stereo increases by holding your glasses further away. Is it the just magnified image, so that a small difference between the left and right image can be seen better?
B

There is a very large increase in stereo.

I also use a 700mm focal length Nikon multicoated cemented doublet close up lens as a single lens telescope. No eyepiece, just my eye.
The magnification is about 2.8 times when held at arms length in front of one eye.
The field is very small, but the image is beautiful and the resolution is very impressive.

henry link said:
Even though I own many more Porros than roof prism binoculars, over the years I've come to dislike the increased stereopsis of Porros over roofs even though I wasn't sure which spacial presentation was more "accurate".
Click to expand...

Interesting thread Henry. To be honest, I'm happy using either roofs or porros - I don't dislike either if they're well put together. But I do think, for what it's worth, the "straight through" view of a roof, seems more natural to me - after all, it more closely matches our own IPD. Pretty much every porro I've ever used, from 8x30s that I use without glasses to the flat field, long eye relief 10x42 SE which I use without, has needed a bit of an adaptation period before I learned how best to look through them (so to speak). I wonder whether this was because my brain needed to adapt to the wider separation of the objectives - whereas roofs (and also the Porro II Canon IS binoculars which don't have the same distance between the objectives as a Porro I) have tended to be more immediately accessible. Anyway that is just my personal experience - I'm sure that of others differs.

Thank you Binastro, Binocularbirdfreak and wdc for your contributions. I am studying effect of magnification on perspective and on stereoscopic vision. Very complex yet interesting topic...