Visited Devon, had a cracking time with the Beavers

I was very luck to have been able to see the Kuhl's Pipistrelle and Geoffroy's Bats in care and at their release in Sussex and a Nathusiu's Pipistrelle as well.

Jealous of Mark's success with the bats, photos too, wow!

Meanwhile back at base the six foxes continue to turn up nightly and I occasionally take photos of them. In the course of which I noticed that Terminator has no lower left canine and that pinged my memory... the long and short of it is that after comparing face markings etc very carefully in old photos and new it appears that "Terminator" is in fact our old friend Psycho (gets worse doesn't it?) who had a lower left canine split from top to bottom so the whole back was off, exposing the nerve. Which may have contributed to his bad temper.... it could well have fallen out by now.

Which makes him also a son of Big Whitey, so Patch and Smudge are in fact his brothers though not litter-mates. It doesn't show!

More Garden badger action almost every night along with muntjac, fox and the occasional hedgehog. Roe and Red Deer in Scotland, red squirrel and excellent bottlenosed dolphins at Channonry point. The local hares have been very active recently.

Set off fairly early for Cemlyn Bay this morning. Really pleased to see a Hedgehog a couple of miles from the house. First one I’ve seen in a while.

Not much recently some mountain hares in Scotland (taken with phone) and the garden badgers are being very obliging. 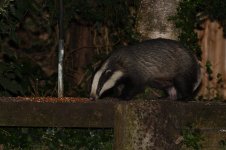 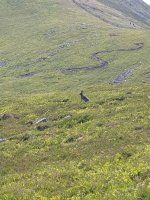 That Badger is an absolute belter, well done!

Lynx's Checklist of Mammals of the World - my two cents