Landed On My Head (1 Viewer)

I was working in my brother-In-law's backyard & a very tame bird flew close & landed 6 feet from me. As I moved around the yard it followed me. A few minutes later it hovered in front of my face & landed on my head. It stayed there several minutes before flying off but remained in the backyard. It then landed on my brother-in-law's head & sat there a few minutes, then back on my head awhile. It remained in the backyard until I finished working I went home. No idea what kind of bird it is or how it trusted humans. Maybe it hatched in someone's home & stayed there until it could fly. I'll try to attach photos. This is just northwest of Dallas, Texas. Ok, struggling with techie stuff, photos soon. I hope.

Probably an escaped cage / pet bird just going on the reported behaviour, but a big guess.
B 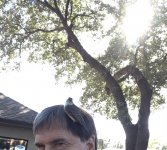 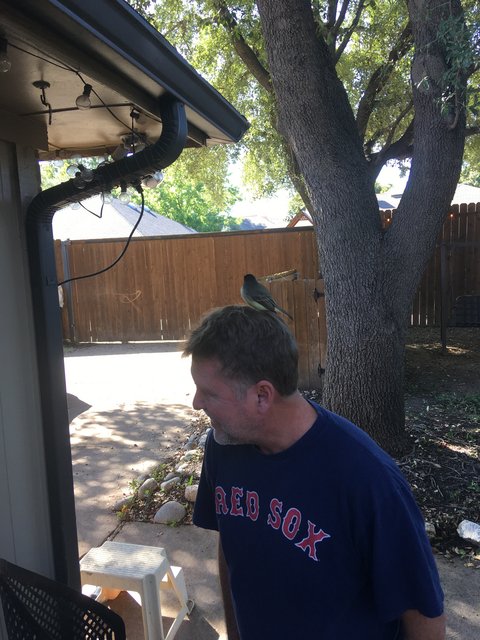 Looks like an Eastern Phoebe - a wild bird, very odd that it would land on your head! If the weather is cold, it might appreciate the warmth? Though it doesn't look cold in your pics. They usually perch on branches and fly out to catch insects.

probably a bird that ran away from home, just a guess. and so cute

Definitely an Eastern Phoebe, that thinks it's a human

Eastern Phoebe for me as well. It was probably captive for awhile because of an injury and had become comfortable around humans.
B

Thank you! I searched "Eastern Phoebe" & watched a Youtube video of an Eastern Phoebe that lands on a guy's head when he goes outside. He took close up video & I could tell it was exactly like the one I saw.

Young bird in my room (Indonesia)
2

May 20th, a Sylvia at Landguard Point, Suffolk
2