Late For Wren Nesting, or Average ? - (Plus A Chaffinch Briefly Interferes) (1 Viewer)

Am pretty stoked at the minute, as we have FOUR different types (species) of Birds nesting around our countryside house in less than orange throwing distance.

Whilst the other three ARE regulars (year after year), another high dedicated box that I put-up last year is now in use.

It's about 12-14ft up & the tree is liberally covered in Ivy, facing open farmland, with many shrubs & cover nearby

So I go out into the courtyard to get some stuff out of the car around 06.55am, when 2 x Wren catch my eye.

I sit IN the car (so as not to disturb them, about two Transit(s) length away & watch these dear little mites.

I've been seeing them out the back, by the brook, right near me, singing their hearts out, in this icy Artic winds we've had lately.

But today, early this Morn' & they're "in & out" the box over a half-hour period, carrying nesting materials

Perhaps I shouldn't be surprised, but I did liberally line the box (as others), with some fresh bought 'Meadow-Hay'

Anyways, whatever, am pretty stoked they're using it, clearly & about to start a family, as we have all types round here (regular)

They range from a Red-Kite pair outside my bedroom & across our neighbouring field, to the more obvious Blue Tits & Gt.Tits

Like, last year, I saw a pair of Goldfinch gathering stuff (nesting material), from a 'Goat-Willow', but I thought it was late ?

We've already had our first Baby Blue Tits, 2-3 days ago, flapping like mad for Mum, fairly near the feeding station (not near the Wrens)

So, seeing them (Wrens) hauling mucho material on at least 6-visits so far, to their box, are they late-starters (?), or, is this about average, time-wise ?

Lastly, whilst there (in the car), I noted a Male Chaffinch came down on a branch right nearby the entrance to the Wren's chosen site.

As he was quite near the entrance, I watched, but then he appeared to 'attack' or pester the lower-sited Wren, who was in & around the Ivy

At that point I made my presence known & the Male Chaffinch flew off, but the Wrens kept coming-back.

Are Chaffinch of the persuasion to do that sort of thing ? (it surprised me to see it & a li'l disappointed to see it, too)

I might photograph the box & box-site later, but I've work to do & sadly it's dark-grey rain clouds outside, for now...

If I get chance, I'll take some pix & attach later, further down the thread.

Haven't done this since the forum layout host-site changed, but here goes, I'll try some pix... 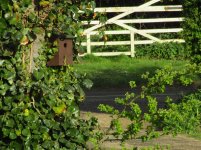 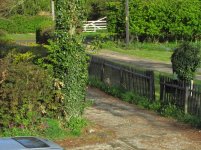 Box seems fairly well-hidden, from distance - Use the White ranch fence-gate as a visual reference to see the box

T
Hello Bird Forum, I have just Registered, I am very interested in caring for wildlife. I have an extremely untidy wild gardenm with too many Trees.
2

Jul 12, 2022
BlessedByBirds
B
K
I have a Wren bird nest with three eggs in it in the hood of my car

O
Do red-tail hawks periodically return to nest after maturing to point at which they can fly?