A second pair of laughing doves were found to be on their nest in the village.
This has caused quite a stir, with a Greek TV crewe turning up to film them on the nest.
The original fledglings disappeared at the weekend , it is not known whether they have flown.

Re The Loutra , Laughing Doves - a new breeding species for Lesvos
Pleased to see that my birding pal, Mark Cassidy gets a mention for his 2014 find of this species.
Here's a google translation of an article as it app
"A new important news about the wealth of the bird fauna of Lesvos was located and came to light thanks to the observation of residents and bird watchers in the area of Mytilene. This is the Palm Tree which is a new breeding species for Greece! The Phoenix (Streptopelia senegalensis) is a bird that occurs in Africa (as its Latin name suggests), Asia Minor and the Arabian and Indian Peninsulas. In our neighbouring Turkey it has a discontinuous distribution in some areas: around Ankara, Istanbul, deep in the eastern part of the country and, finally, in central and southern areas along its coast.
The location of the location On September 27, George Mamolis, a resident of Mytilene, uploaded a photo on Facebook with his mobile phone with a strange eighteen. Stelios Zannetos (PhD candidate at the Department of Environment and a "little bird") noticed her and shared the news with the group (also on Facebook) "Lesvos Bird News", which manages the KPEN Kalloni. The appearance of Palm Tree in Greece was great news. The very next day another resident of the area, Valerie Karameta Triboulot, went to the spot to find the bird. In fact, he managed to see two (!) Birds together. This discovery was not enough and the next day the same observer managed to locate a nest of the species, in fact with two developed chicks! The disturbance created in the bird watching community in Greece was huge and justified: this is the first report of breeding of the species in our country!
For the Phoenix (Streptopelia senegalensis) in Greece there are recordings measured on the fingers and in Lesvos one from 1994 by Achladeri (PDHanson), one from 2014 from Anaxos (Mark Cassidy Snr) and one from 2018 from Panagiouda (Alan Troyer) . This appearance is associated with one of the main factors that give our island its wealth of bird species and is none other than the immediate proximity to the continent of Asia. If approved by the Committee of Rare Birds of Greece, it will officially become another breeding species of our country! The approval by the committee is a formal procedure followed in each country and concerns the documentation of the presence of bird species in its territory (after the submission of relevant reports with the description / photographing of new species by their observers).
Another member of the turtle family, which occupies mainly anthropogenic habitats (cities, settlements), the Streptopelia decaocto, has been observed to expand its distribution to the north in recent decades. Unfortunately, the same is not true of Streptopelia turtur, which is experiencing a dramatic decline in its breeding population in Europe. The Palm Trees hurried to see or even photograph all the "serious" bird watchers of Lesvos together with the foreigners who this time, as every autumn, were on the island to watch the autumn migration." 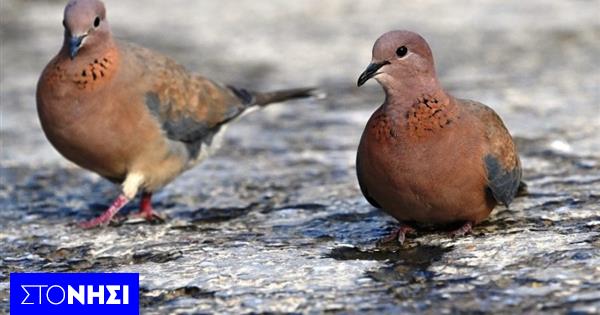