During the last 30 years there has been a strong decline in the population and distribution area of Little Bustards in Portugal (and Spain).

Here are two maps. The one on the left is from the first Portuguese breeding bird atlas (1978-1984), the other one is from eBird and refers to spring records during the last five years (2016-2020). The species no longer breeds in the northeast and is extremely scarce in the southwest. In the eastern Alentejo Little Bustards are still widespread, but their numbers have decreased as well. 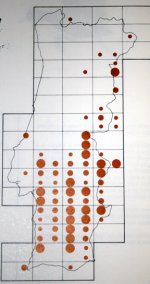 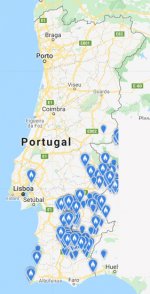 Agricultural intensification I presume. Saw a lot of it in southern Portugal on my visit a few years ago, mostly recently planted irrigated orchards.

Yes, changes in agricultural practices and land use are the main driver behind this decline.

The most worrying part is that they have declined everywhere, even in Special Protection Areas. And in Spain it's the same story.

Hi. I live in a rural area that is the habitual habitat of the bustard and the little bustard in Guadalajara and my usual bird-watching area is an area of special protection near my house.

In the last year I was only able to see little bustard on three occasions and the population of bustard this year, compared to last year, seems to have decreased.

It is hard to habitually observe a bird with the feeling that fewer and fewer people will be able to do it.

The species has declined everywhere but the situation is especially worrying in the northern half (Castilla y León), it almost vanished from provinces like Salamanca, Palencia and Burgos.

This image was presented at the launch of the second European Breeding Bird Atlas that took place online earlier this month. 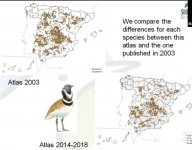 The story is probably as bad if not worse in France. Wonder how they are doing in the rest of their range??

It's always so sad to hear about the loss of any of our wildlife.

Odd thing is, there's been an increase in the number recorded as vagrants in UK in the last few years. Suspect it may be related to released birds wandering from the French reintroduction schemes? (Pssst - don't tell this to BOU Records C'ttee!)

Big Finch said:
The story is probably as bad if not worse in France. Wonder how they are doing in the rest of their rang
Click to expand...

I am not sure about the situation in other countries, but in Greece the species is marked as extinct in the website of birdlife, map here:

Gonçalo Elias said:
I am not sure about the situation in other countries, but in Greece the species is marked as extinct in the website of birdlife, map here:

They've been gone from the entire Balkan Peninsula for a long time; last breeding in the region around 1950 according to BWP Concise. None mapped there in the first European Breeding Atlas, either.

Here is the information provided in the birdsoftheworld website:

Population declines have been noted in most countries. Within the western population block, recent national estimates in its western stronghold in Iberia are of c. 40,000–70,000 birds in Spain (2007) and 30,000 in Portugal (2003–2006) (11, 12)but there are strong indications that numbers have since declined sharply. There were estimates of 1515–2220 in Sardinia (2007) and 1677–1875 displaying males in France in 2008. Unlike many others, the French population has rallied in response to conservation efforts, including the release of captive-bred, individuals, and seems to be increasing; there were 2360–2374 males in 2012 (13). The Little Bustard is extinct as a breeder in much of C & E Europe, with last breeding records in 1907 in Germany, 1909 in Poland, 1921 in Austria, 1918 and 1952 in Hungary, 1948 in Serbia, and mid-20th century in Greece, Bulgaria and probably Azerbaijan. It is recently extinct in mainland Italy. In NW Africa it remains as a very rare and declining breeding species in Morocco: only a few tens of individuals remain (14). It was formerly an abundant breeder in Algeria and Tunisia, but is now probably only an irregular winter visitor there.

Thanks Gonçalo... it´s a sad scene but it´s important to share it

I imagine the counts are much lower now - a few years ago, in Sardinia, I recall being told breeding pairs were in the hundreds not thousands - I only found one pair (post-breeding) on that visit but that was because they were still at a known breeding location. I’m not sure what consensus if any, has been done to map winter feeding grounds for Little Bustard which would be a key component of habitat preservation for this species.

Given Iberia holds the bulk of European populations of Little Bustard (which is now extinct in much of its prior range in Europe), such sharp declines in Spain a very worrying indeed.

I have seen winter maps for the 'la Crau' and Istres - probably posted on here somewhere (and maybe even me) - this was a combined Sandgrouse and Little Bustard count... It seemed to be fairly healthy at the time...

I'll have a look later

The species has declined everywhere but the situation is especially worrying in the northern half (Castilla y León), it almost vanished from provinces like Salamanca, Palencia and Burgos.

This image was presented at the launch of the second European Breeding Bird Atlas that took place online earlier this month.

An interesting is depressing comparison. Does this mean the Spanish 2014-2018 is now available or is it just a screenshot?
You must log in or register to reply here.