I just can't work out whether this is Little or Great. I know a Great can have a black bill during breeding and it is missing the long plumes from the nape. Any guidance gratefully received
Thanks

Thanks Andy. Missed the gape as a method to distinguish. I will assume it is a Little then. Thanks.

Little Egret for me.

KC Foggin said:
Little Egret for me.
Click to expand...

Is that also based on the gape?

vilbs said:
Is that also based on the gape?
Click to expand...

He hasn't a clue.

Andy Adcock said:
He hasn't a clue.
Click to expand...

The point about the gape is correct.

I'd like to pick up vilbs' point about the plumes on breeding Little Egret.

I know a Great can have a black bill during breeding and it is missing the long plumes from the nape.
Click to expand...

Here in Japan, anyway, the lores on Little Egret become deep pink-red or even purpley-blue at courtship, and the bird has two long plumes on the rear of the head as well as filamentous plumes on the chest and back. I attach two photos of this condition. In the first bird, as well as the red lores, notice that the feet have also turned red. In the second bird, the pupley-blue lores are matched by blueish tibia. (I think these are at the extreme for this colouration here, but I haven't paid enough attention to be sure of this.)

Looking back at photos taken over ten years in my area, I realised that all the birds where the nape plumes are present are showing the deep lore colouration of courtship/breeding plumage. But I also have lots of photos from the summer where the loral colouration has returned to normal, and while the chest and back filaments are still strongly present, the two plumes on the nape have gone. I attach a third photo of a bird in this state which is also the state of vilbs' bird in my opinion.

I don't have any specialist books on herons. Can anyone with more knowledge say if is a known feature of Little Egret that the courtship lore colouration and the nape plumes appear and disappear together for just a short period?

Bonus question: I noticed also that the two strong courtship plumage photos I attach were taken ten weeks apart, one at the end of March (at the shore about 60km away from my home, same latitude), and one in the middle of June (near my house). Is this because the birds breed twice in one year? Or some breed early and some late? Or is it just 'one of those things'? 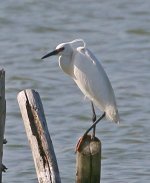 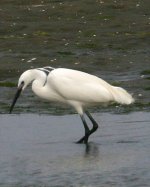 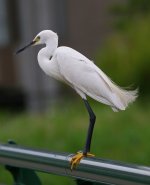 Any bird can lose any feathers any time.

Butty said:
Any bird can lose any feathers any time.
Click to expand...

But it was quite striking looking back at my photos that all the birds with plumes had the deep lore colouring, and no other birds had these plumes. The sample is at least six of each plumage (in spring and summer; I'm not including winter birds), maybe more like ten (but just taken because they were there; I didn't go to search them out). I was just hoping that someone with large experience of this egret could give a definite answer, just out of interest.

The two English-language books I have are not really clear about what happens when.

Svensson et al, Birds of Europe says, '[Lores are] reddish during courtship period. In nuptial plumage delicate plumes formed by two elongated nape feathers'. There is no mention of the filamentous plumes at all. I'm not clear if they are suggesting that 'courtship' and 'nuptial' are different times or simply synonyms - as my photos show the colouration and plumes are simultaneous; the question is whether the plumes last longer than the colouring. This wording could suggest that the plumes go when courtship ends (if the terms are synonymous).

Brazil, Birds of East Asia, says that 'breeding birds' have the two plumes on the head and the filamentous plumes back and front. He also says that the lores of breeding birds are pink or orange. But since we know that the colouration is short-lived (from observation, and Svensson specifically says so), and the front and back plumes, whatever about the head plumes, are around for much longer, it's not clear what period Brazil means by 'breeding'.
Last edited: Jun 11, 2022

MacNara said:
But it was quite striking looking back at my photos that all the birds with plumes had the deep lore colouring, and no other birds had these plumes.
Click to expand...

My experience is that the birds have long plumes in the neck longer than the (seemingly) very brief appearance of highly colored lores. As my observations mainly involve the birds in Barbados which is derived from western European ancestry (at least that is the assumption) and yours are east Asian, there may be differences.
Niels