Being furloughed has been a great opportunity to get to know my local birds... before lockdown I could tell you where to find about 15 species of bird on a local walk, now and average walk yields about twice that. I live in Eastbourne and each route I walk I already know what resident birds I am likely to encounter. I use eBird and register all my sightings and this has helped me enormously as it helps me focused and organised. Besides logging birds, I also try to take photos of each of the species I see, a problem as I shoot in RAW and an average walk can yield maybe a 1000 photos... sometimes more, seldom less. I used to see gulls and assumed they were mostly Herring gulls or Black-headed gulls but have discovered several other species of gulls are around as well such as Lesser Black backed, Greater Black Backed, Common Gull and the possibility of Mediterranean gulls and Iceland gulls and if I go near the cliffs an albatross species that looks like a gull... a Fulmar. That's just the gulls... Sparrows in every hedge and thicket, Dunnocks which were invisible before are now seen every day, Starlings singly, small flocks and huge murmurations, Great tits and Blue tits and sometimes Long tailed tits... and when I am at the marshes if I am really lucky a Bearded tit... not seen any of the other tits yet here. Well... I guess you get the picture... so many other birds around me... the migrants have just landed with my first sighting this year of Goldcrest and Firecrests today in the Cherry Blossoms.. All really very exciting and as we get back to work which takes me all around the South East of England I will have learned so much more that I will increase my sightings elsewhere significantly. 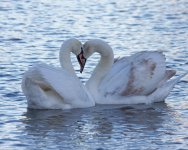 Hi Gareth and a warm welcome to you from all the Staff and Moderators.

I'm sure you will enjoy it here. I look forward to hearing your news and will hopefully see some of your lovely pictures in the Gallery too.

Hi Gareth and welcome to BirdForum.

What a beautiful close up image you've provided for us!

Hi there and a warm welcome to you .
We're glad you found us and please join in wherever you like

Staff member
Supporter
Hi and welcome to the forum. That is a splendid photo of the swans.

Hello Gareth and welcome to the forum, enjoy and all the best.

A hello from a bird-watcher in southern Spain

L
Walker in the countryside who also looks at birds

B
Hi and Happy New Year!