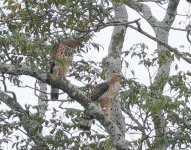 Sorry for poor quality. They were too far away. Are these individual adult male and female Wallace's Hawk-Eagle?

Hadn't realised how similar Blythe's and Wallace's were but I think you're right based on the extent of rufous on the neck.

Must admit, that tail is confusing me a bit now but not sure these birds are well illustrated in either of the books I've looked at? 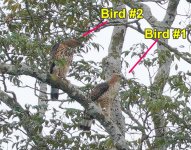 Also there is nest nearby. Pls let me know if nest photo is allowed to post here or not. If ok, I will upload later. There are not chicks in the nest based on my observation (no feeding).

Bird #2 perched on nest edge and eating some prey. Not seeing any action of passing or sharing with Bird #1. In addition, after finished eating, both perched on branches nearby the nest. After a while, the Bird #1 perch on nest edge, looked into it for a while, then it picked up the carcass leftover by Bird #2 then flew off with it.

It's always best to post all the worthwhile photos right at the start. Saves everybody time 👍🏼
Unfortunately there is no full guidance on whether/which nest photos are acceptable.

Based on my cross check of Blyth's on (https://singaporebirds.com/species/blyths-hawk-eagle/ Blyth’s Hawk-Eagle), I believe the under body parts suggested is not Blyth's, correct me if I get it wrong. Though I'm not so sure of the tail pattern you've mentioned as I yet found clear info of it.

I'm also not sure Bird #1 is adult female or it is still immature/juvenile.
Last edited: Oct 7, 2022

Butty said:
It's always best to post all the worthwhile photos right at the start. Saves everybody time 👍🏼
Unfortunately there is no full guidance on whether/which nest photos are acceptable.
Click to expand...

Thanks Butty, noted. I decided not to post the nest photos as Wallace's is listed as vulnerable (https://www.mybis.gov.my/sp/52405 Nisaetus nanus), unless it can be use for better identification.
Last edited: Oct 7, 2022

The tail pattern clearly indicates they are Wallace's Hawk Eagles (broad pale band on the uppertail is buff-tinged, on Blyth's it would be grey-tinged - no other fail-safe feature to separate them, that I know of in immature plumage).
You have a clear adult on the left, judging by the dark breast streaking - this would be absent in young birds. The right hand bird could be an immature.
Note however, Wallace's Hawk Eagle in Borneo appear to be highly variable in adult plumage - birds in mainland Southeast Asia and Sumatra are generally much darker, particularly on the underpart streaking. You can have adults in Borneo lacking any dark streaking.

As for them being a pair - did you notice a size difference between the two? Females are much larger than males.

Thank you all for the feedback. Went back to check on them again today and confirmed Bird #1 (lighter color one/Right side bird) is female as saw it sitting on the nest in early morning when weather still cooling. No male sighted during that time. After quite sometime, Bird #1 (female) flew off and short while it came back but not sit on the nest.

After longer time observed, male also returned. Both off and back then finally saw Bird #1 (female) sit on the nest, only about to sit and it stood up again because alerted by male returned and perched nearby branches.

And thank you @James Eaton for pointing out some clear features for better identification.

Thank you Andy for the effort to help find the id. Appreciated.