Choudhury, Yong, & Round: The status and distribution of the Masked Finfoot Heliopais personatus—Asia’s next avian extinction?​ 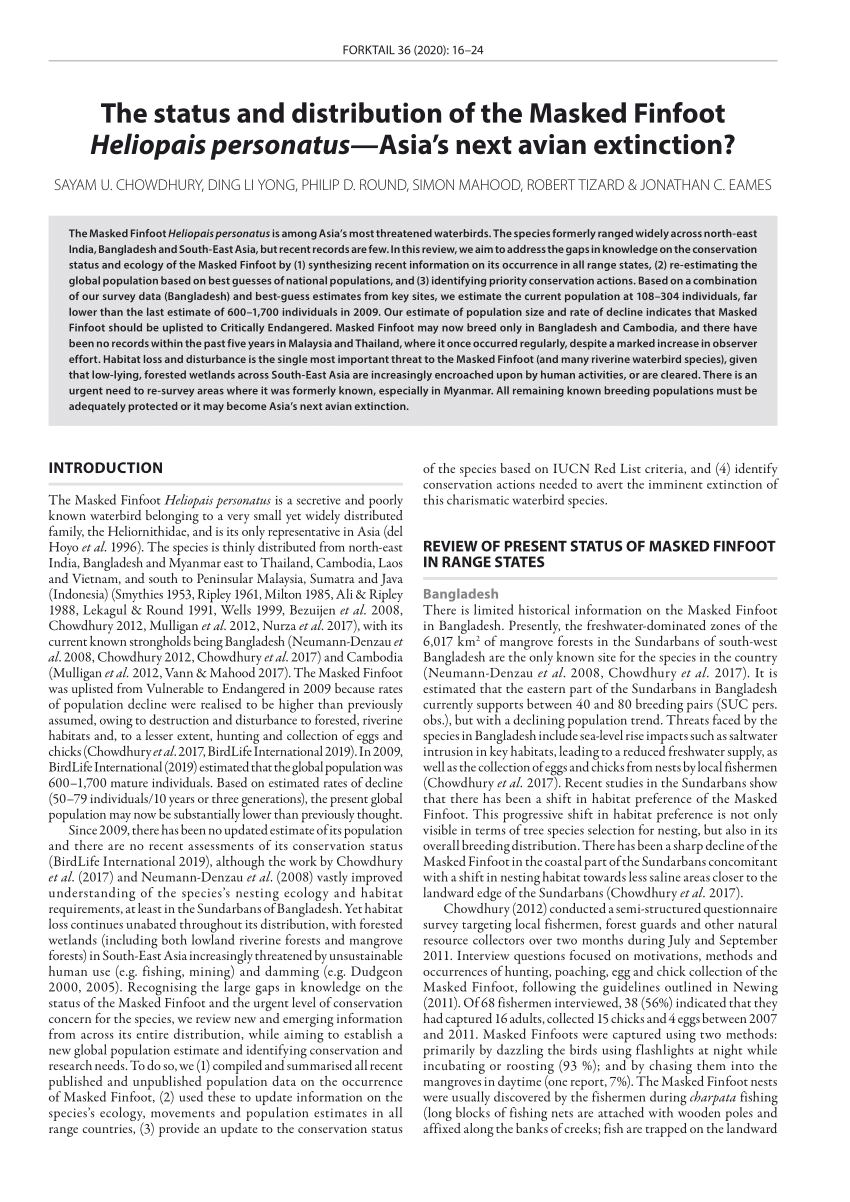 PDF | The Masked Finfoot Heliopais personatus is among Asia’s most threatened waterbirds. The species formerly ranged widely across north-east India,... | Find, read and cite all the research you need on ResearchGate

The Masked Finfoot Heliopais personatus is among Asia’s most threatened waterbirds. The species formerly ranged widely across north-east India, Bangladesh and South-East Asia, but recent records are few. In this review, we aim to address the gaps in knowledge on the conservation status and ecology of the Masked Finfoot by (1) synthesizing recent information on its occurrence in all range states, (2) re-estimating the global population based on best guesses of national populations, and (3) identifying priority conservation actions. Based on a combination of our survey data (Bangladesh) and best-guess estimates from key sites, we estimate the current population at 108–304 individuals, far lower than the last estimate of 600–1,700 individuals in 2009. Our estimate of population size and rate of decline indicates that Masked Finfoot should be uplisted to Critically Endangered. Masked Finfoot may now breed only in Bangladesh and Cambodia, and there have been no records within the past five years in Malaysia and Thailand, where it once occurred regularly, despite a marked increase in observer effort. Habitat loss and disturbance is the single most important threat to the Masked Finfoot (and many riverine waterbird species), given that low-lying, forested wetlands across South-East Asia are increasingly encroached upon by human activities, or are cleared. There is an urgent need to re-survey areas where it was formerly known, especially in Myanmar. All remaining known breeding populations must be adequately protected or it may become Asia’s next avian extinction.
Click to expand...

I'd consider a trip to the Sundarbans of Bangladesh, just to see this bird so if anyone fancies this, let me know.
You must log in or register to reply here.

Rapid loss of flight in the Aldabra whitethroated rail