No striped excitement for me up here in North Wales, best on offer this morning was the year's first Coronet.

No Striped Hawkmoth for me, either, here in South Hampshire but I did come across my first ever Little Thorn by day in a local wood.

Roy and I went year-ticking in Norfolk yesterday (well that was the idea anyway, all we actually got in the bird line was Caspian Tern, and I then saw another in Kent today!)

However we had quite a lot of success on the moth front and while I haven't yet had the full list from Roy some of the highlights included:

Hickling (we returned from seeing the Caspo and dipping the White-tailed Lapwing to find the visitor centre was about to empty their moth trap): Eyed Hawk Moth 2, Poplar Hawk Moth 5, Buff Tip, Pebble Prominent, Grey Pine Carpet and a noctuid Roy is engaged on identifying for us.

I'd only ever seen one Eyed Hawk Moth previously and had no digital photos, so to see two in one go was massive. Almost like a tick! I'll put one or two pix up when I can.

Eyed Hawk Moth pictures as promised/threatened (what is the preferred form for hawk-moth? Either of the aforegoing, or hawkmoth?) 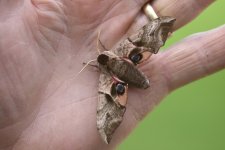 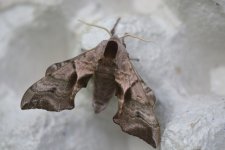 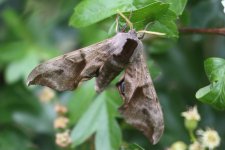 The unidentified moths from Wednesday turned out to be a Pale-shouldered Brocade at Hickling and two Common Waves at Weeting.

Since then I've had my own trap out twice:

Saturday morning's haul had no NFY, BOTR was probably White Ermine plus a fresh Buff Tip, also the following numbers:

I always use the form Hawk-moth, I think that's what's in MapMate and I try to use their format as it makes it easier to import records.

A Peppered Moth was new for the year yesterday, only 9 moths in total, 4 were Edinburgh Pugs, probably the most common Pug I trap here.
A

Out & about in Albania had Cream-spot Tiger, Hummingbird Hawkmoth, many Speckled Yellow, several Nine-spotted & quite a few of a pretty micro-Synaphe moldovica.

Would appreciate some help on this one. Doesn't seem to fit Vestal (but held its wings tented like that) but also doesn't wholly fit the Belles that get cross references too.

Allen said:
Would appreciate some help on this one. Doesn't seem to fit Vestal (but held its wings tented like that) but also doesn't wholly fit the Belles that get cross references too.
Click to expand...