This past couple of days, I've been enjoying/marveling at the variety of warblers in my neighborhood. Yesterday I saw 10 different species of warblers (later confirmed via photos) in the same yard, within maybe 10-20 minutes of each other. Half a dozen in the same tree at roughly the same time. I'm up to at least 12 species from yesterday and today, possibly more once I get a few things identified. Only one I've ever seen before.

And I've noticed something about their distribution; they tend to be in groups. I'll find a tree that has several warblers in it, of multiple species. They'll be doing various warbler things, mostly foraging, and after a little while they'll move on. The whole group moves at once, it seems like. A tree will go from active and full of warblers, to empty of warblers, or vice versa. I've only seen a few warblers that didn't have at least a couple more in the same tree, whereas I've found probably a dozen trees that had this pattern of birds going.

At this point, I'm convinced that they're in groups. I've been calling them "swarms" because it's funny. I've read a few things about mixed-species flocks that include warblers, but nothing about groups of warblers in particular. Is this common?

I have another that I'm reasonably sure is a Golden-Winged Warbler (gray and white bird with yellow marks on wings and yellow on its head/face), a greenish bird with a yellow face/head, and a very plain yellow and greenish bird that I think may be a Yellow or Wilson's. The only one of these I've ever seen before was a single Wilson's Warbler that showed up in a bush outside my window, stuck around just long enough for a couple of quick phone pictures, and then left.

Some of these are just stunning! I've been wanting to see a Black-And-White. And then the Redstarts and Blackburnian- wow. And the rest, so much variety. INaturalist records over 50 species in the state, 24 in just my town. I have a new birding goal: spot a warbler species not recorded (on INat) in my town yet. Considering that there are 38 species if I zoom out on the map a bit, that seems entirely possible.

I was expecting to see more warblers in the spring, but I hadn't looked through my guide and actually registered how many are possible in my area. If you'd asked me in the winter how many more species I thought I'd see this spring, I would have said maybe six. I saw six in about five minutes yesterday!


Any tips on the best way to spot warblers, and see them for more than a couple seconds at a time? I want to see how many I can find, and I want to admire them. I don't see them at bird feeders at all, just in the branches.

My friend who has the tree that had half a dozen species, also has several bird feeders. I'm reading that warblers like fruit. If I take some orange halves there and put them out, could I reasonably sit out of sight and expect the warblers to come out of the trees within an hour or so, assuming they're already in the yard? Or do they need a few days to really register that the fruit exists?

Warblers regularly form mixed-flocks during migration and on their wintering grounds in the tropics.
M

Running water is a great attractor especially in a dry area.

Where are you located?

Most areas have some sort known "migrant trap", a geographic or habitat feature that tends to concentrate migrants as they pass through. For instance here in the Fox Valley reserves near or on lake winnebago tend to be productive, since their are lots of bugs and warbler tend to be reluctant to cross water.

Central Texas. I'm in an old neighborhood with a lot of large trees, which I'm guessing is part of the appeal- these little guys seem to mostly be in the large trees. We're right near a river, but I can't imagine warblers won't cross a regular-sized river. It's mostly 20-30 feet across, nothing massive. Are they afraid enough of open spaces to avoid that? 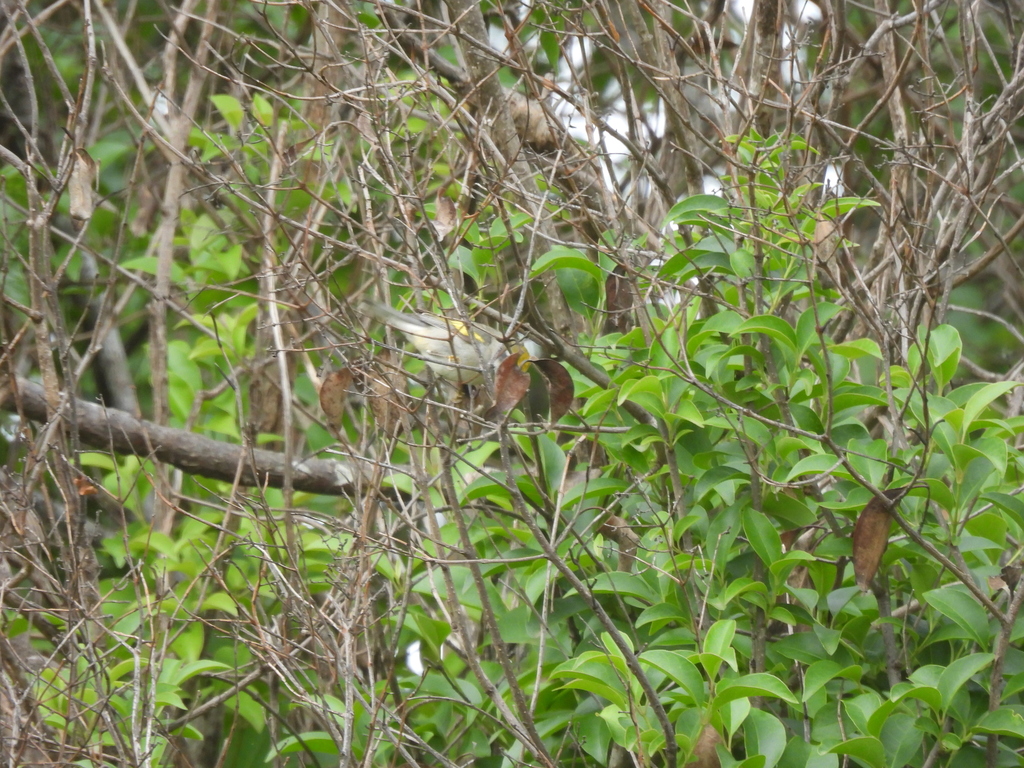 I'm going to a park in the next few days to have a look around for warblers. It has an area of open prairie with a couple of huge trees, a treeline along the prairie, a pond, a creek, and an area of forest with smallish trees. Is my best bet among the trees and around the creek? Do they ever go into 2-3 foot tall grass to forage?
M

Warblers cross the Gulf of Mexico and even the Atlantic. A river is nothing for them to cross.

MikeInPA said:
Warblers cross the Gulf of Mexico and even the Atlantic. A river is nothing for them to cross.
Click to expand...

It's very well known that they are reluctant to just wing there way across. This is why migrant traps like Tawas Point or Maggie Marsh work. They build up in these spots to refuel before crossing. Similarly large rivers and the edges of large lakes will also channel birds.

I can't speak to what it's like across the pond, but the autumn honeyeater movements here see lots of mixed flocks - or more correctly groupings of different homogenous species.

I first experienced this after digging the lawn out on my mum's 1/4 acre suburban block on a bushland edge. I built a beautiful native garden - mixed with indigenous endemics, select cultuvars including some West Australian ones which just went mental and flowered most of the year round !

There were also a few strategically placed elevated water dishes.

The flocks would number in the 100's.

Interesting, since prior to the block refurbishment there'd only be the odd bird here and there. How they found the block still puzzles me ......

Mysticete said:
It's very well known that they are reluctant to just wing there way across. This is why migrant traps like Tawas Point or Maggie Marsh work. They build up in these spots to refuel before crossing. Similarly large rivers and the edges of large lakes will also channel birds.
Click to expand...

Absolute rubbish. Blackpoll Warblers in particular fly long distances over water all the way across the Gulf of Mexico. While some might not like crossing water they do it all the time. If you've ever been to Magee Marsh you'll know that for miles to the south there nothing but sterile farmland until migrating birds hit the marsh and tree line on the shores of Lake Erie. They feed up, then what do they do? They fly all the way across Lake Erie and land at Point Pelee, millions of them, year after year.

Long-distance migrant. In the fall Blackpoll Warblers fly nonstop from the Eastern Seaboard over the Atlantic Ocean to their wintering grounds in northern South America and the Caribbean. In the spring, they don't make the epic transoceanic flight, instead they stop over in the Caribbean Islands and continue north over land to their breeding grounds in the boreal forest.

Whatever, congrats on winning an argument on the internet and enjoy your pedantry.
M

Mysticete said:
Whatever, congrats on winning an argument on the internet and enjoy your pedantry.
Click to expand...

You started it pal.

How many times do you chase a Twitch before calling it a dip?