I found this cluster of what appears to be insect eggs of some sort on the leaf of a bulrush plant in a small seasonal pond (currently dried out) yesterday. It was roughly 13mm long, with each element about 2-3mm in length.

In case anyone is interested, I've been checking out this cluster of eggs every day (the pond is only a 5-minute walk away) and I collected a few this morning. By the time I got home one of the eggs had hatched out and I took the attached photo shortly afterwards. Although it can't be seen from this particular shot, the larva (ca 3mm long) has four prolegs, and so presumably it's a moth or butterfly caterpillar. It's a bit of a long shot, but I'm hoping to keep it alive till the final-instar stage, when hopefully I'll be able to ID it.

Yep.... definitely interested!! Good luck with nurturing it and please don't forget to let us know if you manage to ID it in the end.

An amazing picture of the nest of eggs too!!!

Thanks for the encouragement, Delia!

Hope we find out

Unfortunately, it only survived for a few days!

I kept it in a small container with a strip of Bulrush reed taken from the same plant the eggs were laid on, but it just didn't feed.

That might be due to the fact that according to my caterpillar field guide, some moths lay their eggs on plants other than the larval food plant, and the larvae then descend and feed on other vegetation. Or it might perhaps be due to what appears to be a parasite of some sort on its "neck" (as shown in photo).

Thanks Delia and Julie for your interest!

Sorry that it's not worked out.

Any sign on the original stack of eggs - or are they long hatched?

That's one of many things that I don't understand!

Although there are signs that some of the eggs have hatched out, the vast majority still seem to be intact. I'd assumed that they would all hatch at more or less the same time, as you often seen large clusters of moth/butterfly caterpillars that all seem to be at the same stage of development.

I'll keep visiting the site every few days, and I'll post an update if anything interesting happens!

Have you considered that these might be a species that lays eggs on vegetation and the larvae are aquatic?

Thanks for the suggestion, WalterRayle!

It did strike me early on that it was an odd place for a moth to lay eggs, because although the bulrushes are in a small seasonal pond and the ground is dry at the moment, this is partly due to the unusually dry conditions experienced recently. In fact the ground here can remain very damp - if not totally waterlogged - for most of the year.

I had thought that perhaps the moth had just made a mistake, as insects do sometimes lay eggs in unviable locations (Incidentally, I've ruled out butterflies as my field guide includes photos of all UK butterfly eggs, and these don't match any of them). However, if the larvae are aquatic (not something I'm familiar with), then that would explain a lot!

When I arrived at the site today and had a look at the eggs I could see just one larva sticking its head out from the cluster (as shown in the first photo). Within a minute or so six more of them had appeared at the other end, and they soon worked their way free and then disappeared from view - presumably having dropped off the reed to the ground below.

I don't know what these are, but they certainly aren't caterpillars! I know that some flies and wasps parasitise moth eggs and so perhaps that's what has happened here - at least to part of the cluster.

I think they're eggs of a Tabanid fly, and the larvae (maggots) certainly look like it from the new photos, they'll drop down into the soil/mud to develop.

Amazing!! Cracking pictures there too Paul.

They certainly look more like maggots than anything else, don't they. Thanks Walter. 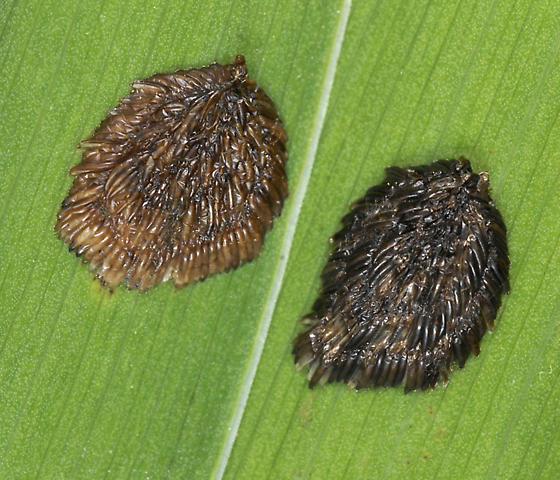 Most of them seem to be on similar reeds as well.

These must be very big flies to produce this quantity of eggage!

I'm still scratching my head though as to where the moth caterpillars came from. In addition to the photo previously shown of a caterpillar apparently hatched from eggs collected from the mass, I've added another one showing a different caterpillar taken in situ the day before.

Thanks for your comments, Delia!

Having given the matter some thought, I've come up with a POSSIBLE explanation which might account for the moth caterpillars, and which is reasonably consistent with all of my observations!

Perhaps a moth of some sort laid a relatively small number of eggs on this reed, and then some time afterwards a Horse-fly laid its own eggs totally covering the moth eggs.

This would explain why I only discovered the first caterpillar (on the 3 August) after I had pulled off the lower tip of the egg mass in an unsuccessful attempt to collect some eggs for microscopic examination at home. Although I didn't see where it came from, I inferred at the time that it must have crawled out from the hole that I'd made.

The following day I came back and this time managed to collect some eggs by again scraping away at the lower tip of the egg mass.

When I got home less than 30 minutes later and stuck everything I'd collected under the microscope, I saw this second caterpillar (but no maggots), and just assumed that it had hatched from one of the eggs I'd just collected. However, I did not see it emerge from an egg, and so perhaps it had hatched out some time earlier in situ and I'd collected it along with everything else.

There might be a more plausible explanation, but I'm afraid I can't think of one right now!

Thanks again WalterRayle and to everyone else who took the time to comment.

gillean55 said:
Unfortunately, it only survived for a few days!
Click to expand...

Sorry to hear this.

Glad you got to the bottom of it - but I must say I have had some nasty Horse Fly bites!!!