The evolution of avian flight is one of the great transformations in vertebrate history, marked by striking anatomical changes that presumably help meet the demands of aerial locomotion. These changes did not occur simultaneously, and are challenging to decipher. Although extinct theropods are most often compared to adult birds, studies show that developing birds can uniquely address certain challenges and provide powerful insights into the evolution of avian flight: unlike adults, immature birds have rudimentary, somewhat “dinosaur-like” flight apparatuses and can reveal relationships between form, function, performance, and behavior during flightless to flight-capable transitions. Here, we focus on the musculoskeletal apparatus and use CT scans coupled with a three-dimensional musculoskeletal modeling approach to analyze how ontogenetic changes in skeletal anatomy influence muscle size, leverage, orientation, and corresponding function during the development of flight in a precocial ground bird (Alectoris chukar). Our results demonstrate that immature and adult birds use different functional solutions to execute similar locomotor behaviors: in spite of dramatic changes in skeletal morphology, muscle paths and subsequent functions are largely maintained through ontogeny, because shifts in one bone are offset by changes in others. These findings help provide a viable mechanism for how extinct winged theropods with rudimentary pectoral skeletons might have achieved bird-like behaviors before acquiring fully bird-like anatomies. These findings also emphasize the importance of a holistic, whole-body perspective, and the need for extant validation of extinct behaviors and performance. As empirical studies on locomotor ontogeny accumulate, it is becoming apparent that traditional, isolated interpretations of skeletal anatomy mask the reality that integrated whole systems function in frequently unexpected yet effective ways. Collaborative and integrative efforts that address this challenge will surely strengthen our exploration of life and its evolutionary history. 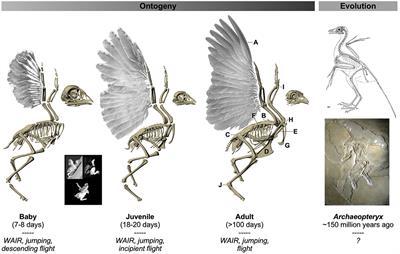 The evolution of avian flight is one of the great transformations in vertebrate history, marked by striking anatomical changes that presumably help meet the demands of aerial locomotion. These changes did not occur simultaneously, and are challenging to decipher. Although extinct theropods are...

Figure 1. Ontogeny and Evolution of the Avian Flight Apparatus. Flight-capable adult birds are characterized by a suite of anatomical features that presumably are adaptations or exaptations for flight. Some of these structures are functionally intuitive, whereas others have no known or demonstrated function(s) but are considered aptations based on their presence in flight capable birds and their absence in flightless birds and extinct theropods.

A
Wing musculature of flightless auks

Flightless birds are not neuroanatomical analogs of non-avian dinosaurs