I am a little bit confused about the Grey Sunbirds scientific name. OD here as Cinnyris veroxii. But....


and the specimen from whence the above description was taken, was given to me by Mr. VERREAUX, through whose liberality I have been put in possession of many new and interesting objects of Natural History.
Click to expand...

So it looks like the name was given for one of the Verreaux brothers. But was Cinnyris veroxii like in IOC World Bird List or officially corrected as in Avibase? How would the code handle this?

Taphrospilus said:
How would the code handle this?
Click to expand...

The correction is based on:

32.5. Spellings that must be corrected (incorrect original spellings)
32.5.1. If there is in the original publication itself, without recourse to any external source of information, clear evidence of an inadvertent error, such as a lapsus calami or a copyist's or printer's error, it must be corrected. Incorrect transliteration or latinization, or use of an inappropriate connecting vowel, are not to be considered inadvertent errors.
[...]
Examples. If an author in proposing a new species-group name were to state that he or she was naming the species after Linnaeus, yet the name was published as ninnaei, it would be an incorrect original spelling to be corrected to linnaei. [...]
Click to expand...

The key words here are "inadvertent error"... If the OS is not clearly the result of an inadvertent error (i.e., if it cannot be excluded that Smith acted intentionally -- say, in an attempt to create a word that would have a Latin pronunciation close to that of "Verreaux" in French), then the name must not be changed.
I actually have a hard time believing that anyone might "inadvertently" write Verreaux "Verox". And here, Smith didn't just do it once; he did it twice, as he also called an undescribed bustard "Otis veroxii Smith mms. Blue bellied Koran" in a footnote on p. 15 of the same paper.

l_raty said:
And here, Smith didn't just do it once; he did it twice, as he also called an undescribed bustard "Otis veroxii Smith mms. Blue bellied Koran" in a footnote on p. 15 of the same paper.
Click to expand...

But notice that he also wrote "Koran" for "Korhaan", also more than once in that same footnote. Was this also "inadvertent"? I submit that it was, and that Smith was prone to inadvertent spelling errors when writing foreign words.

Of course that isn't conclusive but a survey of Smith's work might confirm that hypothesis.

Paul Clapham said:
But notice that he also wrote "Koran" for "Korhaan",
Click to expand...

He wasn't exactly the only one to write it this way.
E.g.: https://www.google.com/search?tbm=bks&q="black+koran"

If he had thought of "Verox" as being the correct spelling of the name, he wouldn't have written it correctly in his English text.
Last edited: Nov 7, 2020

l_raty said:
I actually have a hard time believing that anyone might "inadvertently" write Verreaux "Verox". And here, Smith didn't just do it once; he did it twice, as he also called an undescribed bustard "Otis veroxii Smith mms. Blue bellied Koran" in a footnote on p. 15 of the same paper.
Click to expand...

Laurent, I have met many English people who either cannot grasp the pronunciation of 'foreign' words or retain in their minds any other pronunciation of a 'foreign' word than reading and pronouncing it as an English word. Hence, 'verox' is how they would pronounce 'verreaux'. Perhaps Smith, when forced to transcribe a 'foreign' name, did so letter by letter and not by writing down the sound of a word in his mind.

There is a long, and perhaps slightly dishonorable, tradition of changing the pronunciation of 'foreign' words that have been absorbed into the English language...!
MJB

The same veroxii Sunbird is now cooking in different kettles, in two separate threads, simultaneously. Thus, a bit hard to keep up.

However, I find it pretty hard to believe that any (however undescribed) Bustard, by the name "Otis veroxii", would have appeared somewhat 'verox'/'verax', as in viridian (or green), not in any way, not even in the most minute detail.

Either way: Good luck understanding/solving it. 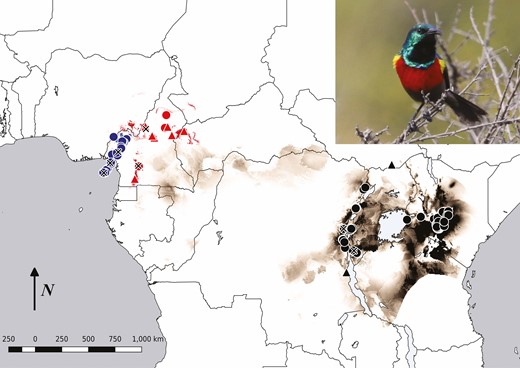 Abstract. Africa’s montane ecosystems are noteworthy not only for their isolation but for their morphologically similar bird populations that inhabit geographic

Abstract
Africa’s montane ecosystems are noteworthy not only for their isolation but for their morphologically similar bird populations that inhabit geographically disparate localities. Many species possess range disjunctions in excess of 2,000 km and appear to represent populations that have been isolated since at least the last Ice Age, including the Northern Double-collared Sunbird (Cinnyris reichenowi). Recent work on other Afromontane birds has demonstrated substantial phylogeographic structure can exist in phenotypically similar populations, with cryptic species occurring parapatrically within the same mountain range. We explored genetic, morphological, and ecological diversity within C. reichenowi to assess whether cryptic regional diversification occurs across the disjunct portions of this species’ range. Within C. reichenowi, we find consistent patterns of morphological disparity that coincide with genetic diversification between xeric and wet montane populations within the Cameroon Line in the Western population, and clear genetic differentiation between Western and Eastern populations. Our research demonstrates that the geographically isolated populations of C. reichenowi represent different species, and that ecological diversification is shaping populations within Central Africa. We show here that two named populations should be recognized as members of a western species in the Northern Double-collared Sunbird complex: nominate Cinnyris preussi preussi in the Cameroon Line montane forests, and Cinnyris preussi genderuensis in the more xeric interior of Cameroon and the Central African Republic, likely occurring in adjacent Nigeria as well.