Eight days ago Carrie and I ended fifteen years of discussion and finally made the move to Australia. During that time birding has hardly been the priority, but one of the nicest things about Australia is that birds are plentiful and easily seen. We decided to base ourselves in an AirBnB in Queenscliff, just to the north of Manly - an eighteen minute ferry ride east from from downtown Sydney - and the gateway to the Northern Beaches area that runs up the coast from the mouth of Sydney harbour for 30-odd kilometres.

Birds seen from the flat's terrace included flyover Sulphur-crested Cockatoos - stately or raucous, but nothing in between, Rainbow Lorikeets shrieking through at terminal velocity, hipster-goateed Australasian Ravens whingeing like an seven-year old denied an ice cream and small purposeful flocks of the silent and much maligned White Ibis. An Osprey drifted over on a couple of days and Welcome Swallows seem to crop up all over the place.

Closer to Earth, an Australian Brush Turkey loafing halfway up a tree was the first bird I photographed in Australia. The only bird I know whose tail is flattened perpendicular to the ground instead of parallel, they spend most of their time on the deck, so seeing this one ten feet up was something of a surprise. 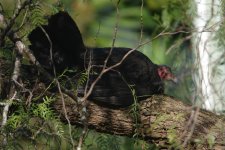 ​
Noisy Miners - dusty-grey honeyeaters with a bright yellow bill and black mask are by far the commonest urban birds, and I was much taken withe the dashing pair of Pied Currawongs that were clearly nesting (or at least planning to) somewhere nearby, and gave both great views and their distinctive three pat call throughout the day. All-black except for a white rump, wing patches and under tail coverts and a striking golden eye, these large-billed australasian "crows" are in the same family as the commoner, flashier, and more musical Australian Magpies. The morphologically similar Grey-backed Butcherbird is a little smaller and far less obtrusive and has an obvious hook to the similarly-long bill. 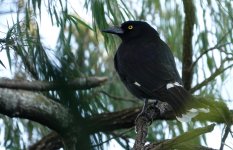 ​
While here I found time for a couple of walks to explore a little. I found a handful of Grey Teals, and a White-faced Heron on Manly Lagoon, along with a pair of Wattled Lapwings, whose high-pitched "creek cree creek crick crick" calls were always among the first of the dawn chorus. A pale-necked immature Australasian Darter headed out to sea and twenty or so Little Black Cormorants headed the other way up the lagoon. Thirty or so Red-billed Gulls loafed on Queenscliff beach close to where the surfers were communing with the ocean and several immature Australian Gannets drifted into the bay in search of a meal, but it was the two unidentified albatrosses shearing offshore that really got my blood pumping. With white underparts and slaty upperparts they were either Yellow-nosed or Black-browed Albatrosses, but were always to distant to allow my to see any colour on the bill, and this frustrating non-ID will likely stay that way until I can get a scope.

A few minutes watching from the end of Queenscliff headland produced a number of adult Australian Gannets, including an impressively plunge-diving adult, and another small albatross sp. heading distantly north, and more distinctively three Humpback Whales blowing and surfacing as they made their majestic way north for the austral winter. A second visit a few days later revealed another couple of small albatross sp and a pair of white-phase Pacific Reef Egrets that came in off and headed inland along the southern edge of the headland.

Hope the move to Oz works out Mike - I'll miss the Hong Kong updates and will look forward to more from down under.

I must admit I fell out of love with Aus years ago, hence why I left, but I wish you well nonetheless, as I know plenty of people love it there.