The new Nikon Prostaff P3 and P7 binoculars have a pretty large FoV, especially the 8x30 and 10x42 versions with 69/70 degrees AFoV (simple formula). P7 with phase and dielectric coatings.

Supporter
Wow, the P7 is really impressive (on paper), with a 8,7º FOV and dielectric coatings. I wonder how far off the original Monarch 7 8x30 this will be. Since there is no mention of ED glass or the like, probably the catch (or part of it) will be in CA behaviour. It is also a little heavier than the original Monarch 7 8x30. All in all, it looks as if this can be a very interesting proposal. I wonder about the pricing though, given that the new M7 has meant an increase in pricing. Thanks for posting.
S

To get an idea of the aesthetics and ergonomics, some images of the x30 and x42 versions of the P7: 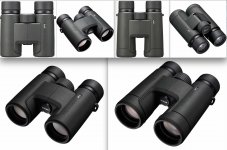 And for convenience the specifications, along with an image showing the diopter control on the P7, and another showing the ends of the eyecups
(as can be seen in the diopter image, much of the RA covering on the P7 has a lightly checkered/ carbon fibre like finish).

yarrellii said:
I wonder about the pricing though, given that the new M7 has meant an increase in pricing.
Click to expand... 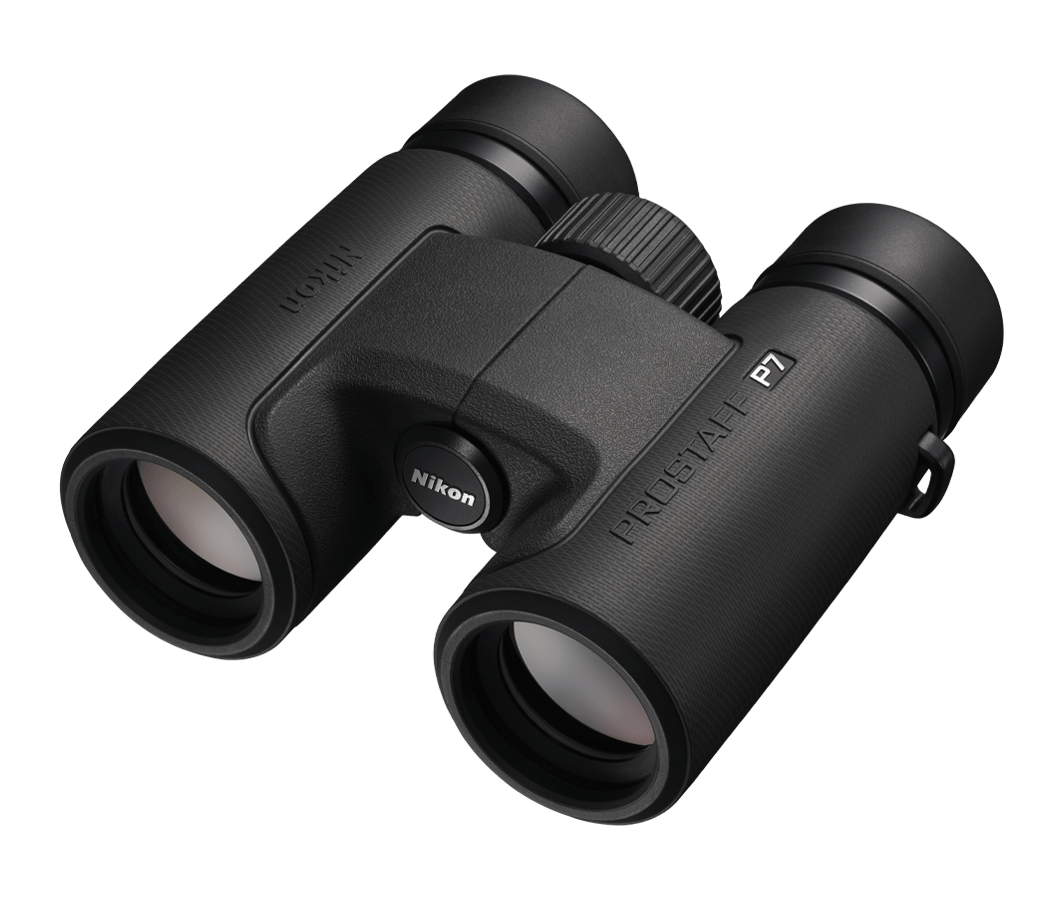 B&H lists the P3 8x30 at 126.95 and the P7 8x30 at 176.95 US.
They also state they are coming soon, whatever “soon” means. Nikon is usually pretty good about stock shipping just after an announcement of a new camera model so maybe these really will be available soon.

I’m curious about these as I’m in the market for an inexpensive pair of backup/glovebox binoculars and almost picked up a pair of Vortex 8x32’s just the other day, I’ll hold off till I can actually handle a pair of the P7’s.

I'm always green with envy when I see the prices you get your side of the Pond.
P

I'm curious as to whether the prostaff 5 series has been discontinued. The P3 and 7 have the same specs in the few examples I compared except for the p7 having dielectric and phase coatings...Thoughts? regards, Pat
B

@pat mitchel
I think so. On nikon.de they are listed under "archived" products, together with the older "monarch" models

Heres a size comparison illustration whipped up out of sheer curiosity comparing the new P7 to a few well known 32’s.

There was every attempt to be as accurate as is possible consistent with the handicap of the different and often wacky marketing photos perspectives. A fair amount of fudging to get the images to play nice is a given. There’s also the assumption that the measurements provided by the manufacturers are with the eyecups down. If not it would really throw off the accuracy of the illustration.

Assuming I pulled it off well enough I was surprised at the size and weight of the P7 compared to the other bins. It may be that the armour/product decoration on the P7 is a lot thicker which might contribute to the fatter look. If the view and handling are decent I can live with the size and weight.

I also feel the current product design is a lot more refined than the older Prostaff’s which always struck me as having a sort of “hiphop” vibe about them. I liked those design choices well enough but prefer these new offerings. 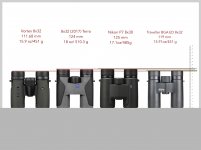 Supporter
@SBay Yes, an 8x42 with decent optics at 590 g is really impressive (I guess, being an entry level Nikon, part of the saving could be related to durability, but then, the Monarch 7 8x42 was only 650 g).

@BryanP Thanks for your effort. I currently have the 8x32 Diamondback HD and the Traveller 8x32, I can try to take a picture comparing them both, to see if it matches your estimates.
P

I have an 8x42 bushnell legend ultra hd ed that has a stated ER of 15.2mm and just checked to find the distance of the eyelens to the edge of the eyecup is 5mm.With fairly facially conformal plastic lenses, I can barely see the field stop with the cups fully down. I suspect the 8x30 p7 looks to have a slight edge in that the eyelens looks as close if not closer to the edge of the eyecup. Probably get the whole field in view with glasses. Fingers crossed (or buy both of them and return the "losing" sample!!) Regards, Pat

yarrellii said:
Thanks for your effort. I currently have the 8x32 Diamondback HD and the Traveller 8x32, I can try to take a picture comparing them both, to see if it matches your estimates.
Click to expand...

@yarrellii Happy to help. Comparison photos of the Vortex and Traveller would be great. When I was putting this illustration together I kept rechecking the size of the traveller as compared to the other bins it just didn’t seem accurate. If it is spot on then the Traveller is one compact 8x32

Supporter
@BryanP And here it is.
The Traveller are a little taller. Doing a quick home-made measurement, the DBHD is around 11,2 cm and the Traveller around 11,9 cm.
On my scale he DBHD weights 444 g and the Opticron 451 g, just a mere 7 g difference.

The tubes on the Traveller seem slimmer, but I think it's a mix between the colour (black makes makes for a more slender figure, as any fashion victim knows ) and also the fact that the outer part of the tubes on the DBHD is shorter, so it appears stubbier. But, as a matter of fact, putting the objective end of each against the other (3rd picture) the DBHD is indeed slimmer, but I'm not sure if by a single millimeter, so less than what the eye thinks.

Everything on the DBHD seems "rougher", and I don't mean it in a pejorative way: the strap loops are way bigger and chunkier, there's a bit of black bare metal on each outer side, by the loops and also on the bridge (it reminds me loosely of some design cues of past Swarovksis), and the sides of the rubber armour have a grippier rougher area. The Traveller seems a more refined design, more polished, as if the sculptor had stopped working on the DBHD, but on the Opticron he would have gone on an on carving a little more, shaving yet another splinter of material to get a purer form. 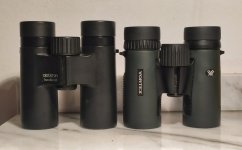 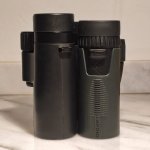 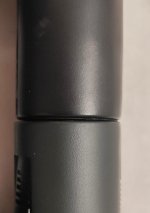 Excellent and thanks @yarrellii
The photos helped me sort out where I’d gone wrong with the original comparison illustration. The DBHD in that version was inadvertently made a wee bit too large. (I blame the touch interface of the iPad) 😉 When I fixed that everything else fell in place and the Traveller now seems to more closely matches what I’m seeing in your photos.

I had an opportunity to handle a DBHD 8x32 the other day and I concur with your use of the word “rougher” In fact I liked it for that reason, it seemed like it could be knocked around a fair bit and still retain some utility. Not having to fret or fuss too much when it inevitably gets banged around while bushwhacking would be a bonus as well.
The store where I was able to examine the Vortex also carries Nikon bins and are usually good about stocking new Nikon product in a timely manner, so fingers crossed the new P3 and 7’s will arrive soon. 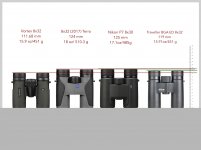 All the Prostaff P3 and P7 versions in stock now on nikon.dk, so guess they'll soon be available in Germany too.
B

SBay said:
All the Prostaff P3 and P7 versions in stock now on nikon.dk, so guess they'll soon be available in Germany too.
Click to expand...

They were in stock on Nikon.de, too but in checkout they said delivery time will be 1-2 weeks.

Yesterday at 9:13 AM
Binocollector
B

Why I like a refined Nikon EII 8x30 porro binoculars?
2

B
New member with his favourite birding binos