Patudo said:
Have many folks here tried the 9.3 degree version of the 7x35... and does anyone know if there were multi-coated versions of that model (I think some of the Gold Sentinel models might have been)?
Click to expand...

Over Christmas I was lucky enough to get mint 7x35 9,3º Gold Sentinel (in its lovely leather case) and I'm simply in awe. I've been birding with them every day for the last week and I'm left without words, really. I have not compared them to any other binoculars except for my "kitchen window" 7x50 Vixen Ultima porro, which I'm very fond of... and they Nikon simply crushed them in terms of sharpness, contrast and "sparkling view".
These Nikon offer such a detailed view, they're full of "7x magic", and the view is deep and rich in detail, sweet, almost intoxicating. CA is simply nowhere to be seen (amazing for a "humble" device that's long in the teeth and has no flashy "ED, HD or flamboyant coatings).

I'm looking forward to testing them against some top-notch performers like my EL, but I think these are instant favourites and bond to become my go-to for expansive and relaxing views. I'll do a deeper review/comparison once I've used them more, but so far I'm simply and utterly impressed.
H

The Gold Sentinels are beauties aren't they. One of the few old binocular legends that actually exceeds expectations, instead of disappointing.

henry link said:
The Gold Sentinels are beauties aren't they. One of the few old binocular legends that actually exceeds expectations, instead of disappointing.
Click to expand...

Yes, these are really lovely, and far beyond what I had expected (after having a 7x35 Aculon and 7x35 Action EX). This is an impressively well put together device with an amazing performance for (what I assume was) the price. This is my unit, as far as I understand, it's a Gold Sentinel, given the golden stripes on the objective tubes. 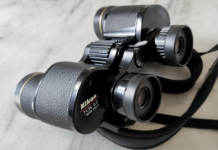 After reading your comments about the performance of the A series in comparison with the E series I'm actually at a loss about binocular value, and the same goes with some modern Nikon porros. I've done a quick test looking out onto the garden: different subjects (trees, the odd passerine, barks full of crevasses, the compost container made of recycled plastic that offers many textures and reflects the light in many subtle ways, brick and white walls). I've organised a quick comparison with other porros, another 7x35 Nikon, the Action EX, a nice 7x50 Vixen Ultima (refurbished by De Kijkerspecialist) and a 8x30 Nikon EII. 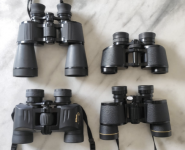 First off: a side by side between both Nikon 7x35... and surprise surprise: the A is sharper and the image is more vivid than the A-EX. I don't know about original price of the A series, or its "recalculated price" adding inflation, but I guess the A-EX is one step above the Aculon, which I think sits in the same position as the A in Nikon's range of porros (from cheaper to more expensive): Aculon, A-EX, EII.

I sometimes find it hard to put the characteristics of the view through binoculars into words, but a focused subject through the A appears to be cut-out from the background in a more prominent way than through the A-EX, it has more "pop", and certainly the image wows you more. Not massive, but textures and contours through the A-EX appear to be somewhat more flat, if this makes any sense. I'd also say that the A is (under broad daylight) a little brighter, however, its image can also have a slightly more yellow hue. All in all, the view through the A is more engaging, vibrant, alive.

Another surprise comparing the A and the Vixen Ultima 7x50: the Vixen is similar to the A-EX in that it lacks the last bit of "spark" that the A boasts. Furthermore, the Vixen is not as bright (so much for the brightness of big lenses on broad daylight).

Enter the EII 8x30. Yet another note in the same melody: the small 8x30 is noticeably brighter than the 7x35 A (and A-EX, obviously), but it's also brighter than the 7x50 Vixen. Both the 7x35 A and the EII share a similar "pop", but the EII offers a more neutral colour representation, and I'd say a little more contrast. I'd say in sharpness and "vibrancy" the A is closer to the EII than to the Ultima or the A-EX. Every time I look through the EII after not having used if for a while I'm impressed again. This is such an impressive device. If not for it's quirks (the -wrong- way it hangs, tendency to fog up internally where I live and dated focus -compared to contemporary roofs) I really think it gives so much (especially considering the prices you payed for it 4 or 5 years ago, nowadays it's getting more and more expensive). Although the FOV of the A 7x35 is 9,3 º, the difference between this and the 8,8 º of the 8x30 EII is not much, it hardly gives me any noticeable difference, both are immersive and a pleasure to look at.

My main interest in 7x35 porros is that 7x is my favourite format (in terms of "sensual enjoyment of the view", so to speak) and porros offer an unmatched 3D feeling on short distances, so the mix is hard to beat. However, modern 7x35 binoculars are not the most popular ones, and high performance 7x42 roofs seem to be a dying breed. The discontinued FL is a genre on its own, with Abbe-Koenig prisms, a wide field of view, a quirky plastic body and impressive light transmission figures. Coming from a completely different set of parameters: smaller aperture, SP prisms and flat field, the 8x32 EL has other charms, and its flat image gets compensated by a surreal sharpness that makes the world more beautiful to look at and subjects jump into your eyes. Surprisingly, comparing the three-dimensional, deep and sweet image of the 7x35 A, the FL and EL seem to be on the same boat: both offer a much brighter view and a cooler hue that separates them from the A. I'd say the EL has the more neutral representation of colour. In terms of sharpness, the A really holds its ground against the German/Austrian giants, I find this really remarkable. So much so, that I think a well preserved 7x35 porro can be a reasonable (and cheap!!) substitute in case you can't find a modern 7x42 at an affordable price.

Having had a 12x40 E (C) and a 8x30 EII I'm really curious about the view through a 7x35 E (C) and also about the 8,6 º Naturalist. Maybe the smaller FOV means it's better corrected? I've spotted one on sale, but I'm not sure if it will improve upon this Gold Sentinel. Ah, a last comment, compared to the E and EII, the focus wheel on this 7x35 A is a long barrel, which makes it easier to use, especially considering that (at least on my unit) the wheel is quite hard to move, almost "Habicht hard", so to speak. But then, depth of field is such that focusing is minimised. Such a hidden gem, thanks guys for pointing it out.
Last edited: Jan 12, 2022

Why I like a refined Nikon EII 8x30 porro binoculars?
2