this female duck I can't really come to terms with. It has been present in a group of mallards (~ 20 birds) for the last couple of months. 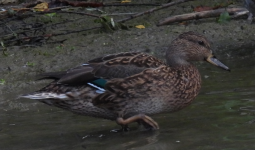 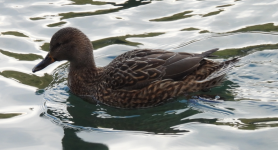 It is on the smaller side for a mallard. The most distinctive feature is the green specullum.
The rather open facial expression and the dark bill with orange patches at the base remind me somewhat of a teal.
The legs are rather dull orange-yellow. Otherwise it looks like a typical mallard.

During feeding the bird is continuously harassed by the more typical mallards.

The group is regularly visited by a drake Mallard / Pintail hybrid which is also harassed by the typical Mallards. 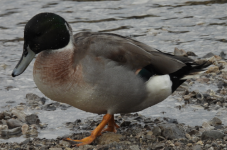 Could the female bird in question be a female Mallard / Pintail hybrid (supposedly sibling of the drake) or even a second generation hybrid fathered by the drake hybrid?

By the way this is what a drake Mallard / Pintail hybrid looks like in eclipse plumage: 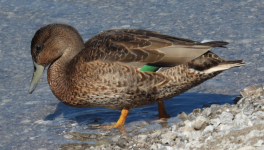 As first generation female hybrids between the two species in several cases I know had a greyer ground color of the bill, I am wondering if this bird could be a backcross of as hybrid Northern pintail x Mallard to Mallard.

here are some female birds which are most likely first generation hybrids Northern Pintail x Mallard:


But as hybrids in general tend to be more variable than pure species , it may well be a first generation hybrid