THis is not the most popular group to be asking about but hey...they do cause a lot of 'fun trouble' for me as an advanced beginner in Larids and I'm not the only one.
This one I missed at the first go as I was following this small group of gulls that took some offal off of a Japanese Cormorant. In the overview there's a Glaucous Gull (better pics at https://www.inaturalist.org/observations/68341215) and what I think are a 2CY and a 3CY Slaty-backed Gull (or 4CY even)

I find the bill very heavy for a (common) Slaty-backed Gull or Vega Gull. I have had no luck yet at finding Glaucous-winged. The headshape appears ok for that but otherwise I don't see why it should be that.
The dark tail and mottled rump stand out but I can't link it to a species.

Anyone care to shed some light on these poor shots?
beware though: there are a few not so good shots coming after this one. 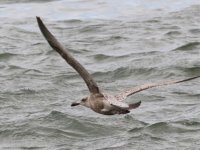 It is nearly 20 years since I struggled with Gulls on the Asian Pacific coast, so I am rusty to say the least. I am struggling with this one, however it reminded me a little of G-w X Western Gull on the American Pacific coast.

It set me wondering about G-w X Black-tailed. There was a putative reported in South Korea in 2015 but I can't find any flight images on the web. I can't find any G-w X Slaty-back images either.

Happy if someone can offer any suggestions.
H

Thanks @Muppit17, it's a start! I can't imagine a black-tailed x Gw cross being so small, but i will look into it.
Apart from GW and SB Gull with some off plumage, the third most logical explanation might be hybrid GWxSB. IThink there are records of Western hybrid in the area but i should check that again.

edit: on trying to find your hybrid I did come across this juvenile Slaty-backed Gull which seems to fit my bird rather nicely (to my beginner's eyes)
http://www.gull-research.org/schistisagus/slaty4cy/slaty66.html
the uppertail is mottled not yet faded, the head is big, dark, heavy with a dark hefty bill... and the wing pattern might be just ok...
It is 5 month overdue but that should not be too big of a problem for northern birds maybe?

looks like a slaty-backed to me. they can have heavy bills - this one not so much.
H

thanks Lou, much appreciated. Would you say then that this is a mostly juvenile plumage or is that simplifying matters?

Gerben, if you are on Facebook check out the Kantori group - an English language group for ex-pat and Japanese birders in Japan. There are some very good birders who may have some input on the ID of this gull or who may be interested in seeing it.
H

Thanks Forest, I am a Kantorian myself, it is a very useful -and readworthy group- but these id issues are often more suitable for this forum i find. I tried there and with an asian gull fb-group too...but sofar only here I received comments...
It could be that JP residents can't really be enthused by the umptieth badly lit immature gull that is probably one of the usual suspects.

HouseCrow said:
Would you say then that this is a mostly juvenile plumage or is that simplifying matters?
Click to expand...

mostly juvenile but some rear scaps are replaced ones, so 2nd generation, so the whole bird now is better called first winter or 2cy (or 1cy? - date should also be provided when asking for an ID )
H

Of course i mentioned the (near) date ; ) . March 2020 is in the thread title Lou.
Thanks so it is a rather late moulting 2CY bird.
Glad to have this one solved, thanks again.

HouseCrow said:
it is a rather late moulting 2CY bird
Click to expand...

Delighted for Lou to correct me, but... I think the point is that it's a normally-moulting 1st-year (in March, 2CY) bird, i.e. its last significant moult was the post-juvenile in late-summer/autumn after hatching (1CY), and that as part of that the scaps (and whatever else) were replaced - the plumage that then follows being the 1st-winter/1st-year which doesn't see any more significant moult (a few head-feathers etc?) until the next full moult in the following autumn (2CY).
H

Ah, thanks for that explanation. It looked a bit odd to me when i compared it to other 2CY birds at gullresearch. It looked fresher, less worn. I mentioned the clear mottling on the tail. Which at first i ascribed to it being a different species, as the other SbG had quite faint mottling. That is why i later thought it might be a young bird hatched maybe in summer.