Pretty sure this is an Alder, but I have never seen one before much less in my back yard (Northfield, IL). Sighting was 2 days ago May 26 in the evening, and it was darting down from lower tree branches to nab flying insects and a bee. Pretty sure it was a flycatcher from its behavior and size.
Pretty cool to watch him work.

Unfortunately, I was in my backyard doing macro photos so I only had a 150mm macro lens, and the bird was up 25-40 feet in the air. Shooting into the sunset as well, so getting good ID shots was challenging to say the least. I had to really crop up to get these pictures, which does create some chromatic and focus issues. Including several shots to aid in ID.

Notable features:
Very noticeable crest
White throat/shoulder
Yellowish area of lower belly (hard to see in pictures but it was clear in person), with rest of belly mostly white
Olive or brown top side (too dark to distinguish which it is)
2 very clear white horizontal bars on wings
Smaller vertical bars on wings are very noticeable
Very small bird - I would say warbler size, no larger than a sparrow (probably excludes similar Olive Flycatcher which is larger)

Merlin ID came up with Olive but only after I removed the size filter. I thought it was an Alder given size. However, its stomach marking does look a little more like the Olive so maybe this is just a very small Olive? Or something else?

Hello and welcome to BF, I am sure Someone will be along who knows what you have photographed.
B

I'm thinking your bird is an Eastern Wood-Pewee. A bit too large a bill and a slight crest for Alder, and as you said not a bold enough "vest" underneath for Olive-sided.

I agree with birdmeister on Eastern Wood-Pewee.
Last edited: May 28, 2020

It's just a flesh wound.

I agree as well. Eastern Wood-Pewee has a dusky vest, but not as prominent as an Olive-sided Flycatcher would have.

Another for pewee.
J

Going with the pewee, thanks everyone! FYI he just came back and I got some much better pictures with my 300-500mm. Hopefully these confirm the pewee ID! 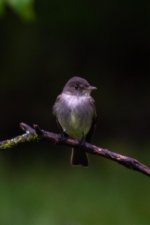 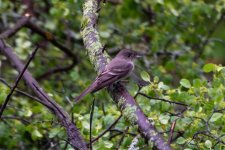 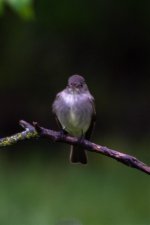 yes, its a pewee

I meant to say welcome to the forum, jsnorman.

A PeeWee for me.

A WC1 Ficedula, fact or artefact?