Owen's lifetime of wildlife in a year. (1 Viewer)

An early start to go to wixhall moss in Shropshire. A long way but still the closest Large Heath colony in the country.

Saw about a dozen but almost exclusively flying over the boggy ground away from the paths and being gusted by quite strong winds. The only one I saw perched I realised too late my camera was still on Manual focus. So no pics. My 100th lifer of the year though which was one of my main targets at the beginning of the year.

Also had my first Ringlet and silver studded blues of the year. The blues were much more camera friendly. Even managed some phone pics. Beautiful little things. 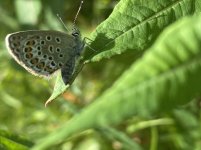 yesterdays other two new species, fair to say Large Heath remains off my 'happy with my photo' list 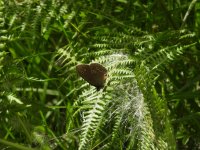 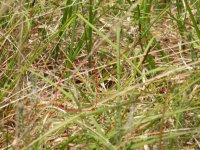 Another very early start for a trip to Cumbria after two more butterfly lifers. I’m staying over but tomorrows weather looks quite gloomy (followed by wet) so kind of felt I had a very small window to work with.

First stop was Honister Pass Slate mine. Looks like quite a cool tourist attraction, nice cafe, lots of great slate statues but also one of the highest parking places available to try for Mountain Ringlet Britain’s only proper montane butterfly species.

Despite the high starting point you still had to walk quite a bit higher up pretty steep tracks. Something made worse by me mangling my two sets of directions and heading up the wrong track.

Despite some great wheatear and a hummingbird hawkmoth I’d done a fair bit of climbing without luck before I reread the instructions and saw how they could relate to the features visible on the other track. Once I corrected I soon found a stretch of hillside with dozens of Mountain ringlet. Very small and very flighty in strong sunlight but I did get some photos.

What was supposed to be a fairly quick climb had ended up being five miles of walking around the fells but the feeling of being on a proper mountainside with the elusive butterflies all around you was great.

It didn’t leave as much afternoon as I’d wanted but I decided to skip some nearer sites and head to Arnside Knott.

Loads of butterflies mainly dozens and dozens of grayling which were incredibly territorial and wouldn’t let anything else settle. Saw over a dozen large fritillaries without seeing one land.

Had bins views of a few Brown Argus including one that was definitely male (and therefore not a similar female common blue) not even sure if there are common blue up there but I was happy to confirm one was definitely Northern Brown Argus (I’ve now seen northern and southern this year without seeing the regular, hopefully in august)

Might try for photos tomorrow or possibly come home via a few birds.

Leaves me with 5 British butterfly species (and I guess one Irish) for the life list, will hopefully have a shot at 3 more this year.

Largely a horrendous drive down the m6 but at least had an early treat of visiting Foulshaw moss.

Very similar habitat to whixhal moss which I visited last week and indeed, despite the gloom I briefly saw Large Heath and white faced darter here too (as well as first black darter of the year)

The main draw though was nesting ospreys. I saw my first ever ospreys years ago when I was seeing someone in the lake district but they were quite a bit further north and it’s great to see them spreading out over the region.

Also managed some Redpoll. A species that’s apparently perfectly common in South Wales but which I never seem to run into. A very welcome late year tick.

An amazing reserve. I get the impression in sunshine it would be an absolute trove of insects.

Now for the rest of the drive. 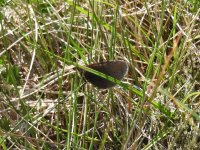 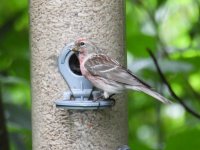 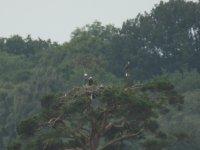 Owene said:
Leaves me with 5 British butterfly species (and I guess one Irish) for the life list, will hopefully have a shot at 3 more this year.
Click to expand...

Nice work with the butterflies. I have 3 left to go, with only 1 more targeted this year.
O

Trystan said:
Nice work with the butterflies. I have 3 left to go, with only 1 more targeted this year.
Click to expand...

Which ones do you still need?

Owene said:
Which ones do you still need?
Click to expand...

Glanville fritillary, Large blue, and hopefully later this year, will get Silver-spotted skipper. What about you?
O

Your three are all a bit of a way from you aren’t they. I found both large blue and the glanville quite easy on the sites but the glanville especially is such an awkward place to get to. There are some released ones in Somerset i think

Yes, I had planned to get the large blue last year but the red necked stint in Northumberland affected my plans, and I've missed the spotted skipper a couple of years ago due to bad timing with the weather. They all require a bit of a trek for me.

For black hairstreak, you can be lucky and get them right at the end of their season when the purple emperor is at the beginning of its season in Northamptonshire where chequered skippers have also been released, though I don't know exactly where. I made the trip to Scotland for them last year.
O

Trystan said:
Yes, I had planned to get the large blue last year but the red necked stint in Northumberland affected my plans, and I've missed the spotted skipper a couple of years ago due to bad timing with the weather. They all require a bit of a trek for me.

For black hairstreak, you can be lucky and get them right at the end of their season when the purple emperor is at the beginning of its season in Northamptonshire where chequered skippers have also been released, though I don't know exactly where. I made the trip to Scotland for them last year.
Click to expand...

We’ve talked about Scotland next year but I think it would just be one visit to the site on the way to the isles so one rainshower and it’s ruined.

Hopefully going for purple emperor in northhants next weekend. Not sure if black hairstreak is still possible or not. I’d kind of assumed not and was hoping for some good birds in Lincolnshire or nearby.
O

A few days that i hoped might add to the lists but didn’t. Whinchat are starting to properly annoy me.

Got a night walk in the Forest of Dean tonight so left home a bit earlier and went to slimbridge to have a try for the bluethroat.

Dipped it twice last year and looked like the same would happen again, had turned to leave as the area closing time approached when it started singing. Once it’s location was nailed down I managed a half dozen brief views to go with the song. I’d love to get better views one day but after 2 dips I was very happy.

Very enjoyable RSPB night walk at Cannop Ponds. I quite like doing a few organised walks during the year, I usually learn something (last night I got shown a ride planted with honeysuckle for White Admiral that should be doable after work one day soon). Turned out the walk was being led by a former pupil, don't think I actually taught her but nice to see an interest in wildlife and conservation all the same.

It was quite late actually getting dark so had some time with a kingfisher and the dusk chorus before waiting for Nightjar. A brief period of churring and then very close views of male and female birds well before it was properly dark. Lots of roding woodcock as well and again in just enough light to really see it.

On the mammal front a few fallow deer (and a roe in the headlights on the way home), Pipistrelle, Soprano Pipistrelle and Daubentons Bats and I'm pretty sure sounds of boar and muntjac. I won't count the boar for the year though.

Oh and glowworms, didn't take a camera so thats the only photo I got 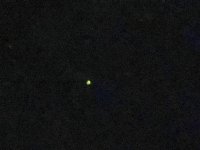 Quick walk around penarth at lunchtime provided my first gatekeeper of the year.

Staying at the inlaws in rugby for the weekend. Just the right time of year for a visit to nearby Fermyn woods for my number one target of the year.

I forwent all of that and just saw one on the track about 20m from the car. It wasn’t supposed to be that easy.

I can actually understand the frustration as I then stayed another two and a half hours without seeing another one until I got back to the car and saw, presumably the same, one in flight.

Great supporting cast. No white admirals for me (or anyone I spoke to) but quite a few Silver Washed Fritillary, a lot of purple hairstreak and a few White Letter hairstreak. Even managed to get a photo of one perched right at the top of a tall elm

Spent the afternoon walking around a baking hot Frampton Marsh without troubling the lists. My first two visits there brought me three American wader ticks but it’s a bit early in the year and there were just enjoyable views of juvenile avocet and plovers. A great place to visit, hopefully I’ll get back later in the year.

The highlight of the day was definitely the Emperor though. Even when it wasn’t the most purple specimen it was a really special butterfly. Phone photo only for now 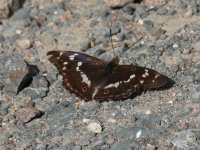 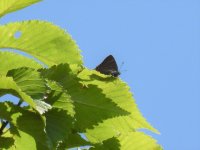 Spent a morning doing pollinator counts and then helping out with a butterfly transect with the Porthkerry Wildlife group.

The highlights were probably a very fresh (second brood?) Holly Blue and some amazing wasp spiders but the addition to the list is essex skipper. 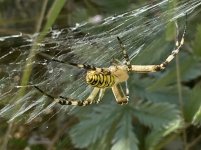 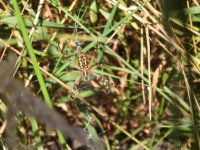 Last but one butterfly trip of the year, to Portland. Warm but very windy and very cloudy so not really ideal

Got there a bit early for butterflies so paid a visit to ferrybridge. The little tern colony seems done for the year but I found 8 in amongst the gulls and waders by the cafe.

Spent about 2 hours at the ruins and cliffs at church ope cove. Plenty of chalkhill blue and gatekeeper but nothing much else of interest despite a lot of searching. Very very cloudy.

Onto the bill and a quick chat to the sea watchers before having a look for lulworth skippers. Less cloudy here but very very windy constantly flushing gatekeepers and blues and having them gusted away. Had a quick look at the quarry to see the odd sight of a rabbit in the little owls crevice

The sea watchers had gone by now, they’d had slow going but picked up a few decent birds. I gave it an hour with nothing to show at all.

Onto tout quarry where there were enough sheltered spots to find dozens of butterflies. Added lulworth skipper to bring me to 49 of the British 58 for the year (2 of the other 8 in Spain and still chances for 3 more) 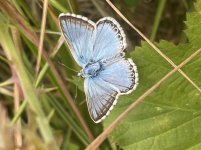 A morning trip to Gloucestershire

Second dip of the Epney turtle dove followed by a quick visit to slimbridge.

Very enjoyable on the summer walkway watching a female wheatear. Always one of my favourite birds. No whinchat for me though.

Nice wood sandpiper from the zeiss hide along with quite a few green which I think might be a British year tick, not really been paying much attention to where I’ve seen birds this year.