Yesterday (May 9th) I took these photos at Cabo Raso near Lisbon, which is one of the most western places on the Portuguese coast. My question is about the bird that is on the right side of the photos, which I think could be Puffinus puffinus or Puffinus yelkouan. This bird looks more corpulent than the bird on the left (P. mauretanicus), has whiter underparts and a thin, dark bar in the axillary region that does not reach the front edge of the wing. Can you please give me your best opinion on this bird?

The photos were taken from a great distance and then enlarged in the image editing software. For this reason they do not have a fine quality.

Thanks in advance. Best regards, 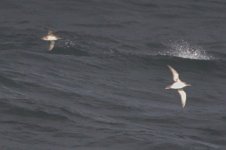 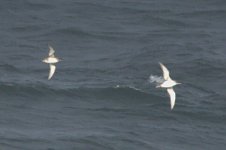 Hi Luís,
I see that nobody has replied to your question, so I may as well step in, with the proviso that my experience of Yelkouan Shearwater is limited to foreign holidays and I haven't seen many Balearic Shearwaters away from Ireland, where they are scarce annual visitors.
The subject bird is certainly noticeably pale below, but I suspect that it may be more likely to be a pale end Balearic. The undertail coverts are a bit more extensively dark than on many Yelkouans, with what seems like a messy demarcation between these and the pale underparts, and, likewise, the head pattern seems quite smudgy also. The birds are both strongly lit from below at this angle, and so may appear whiter than they actually were due to this, especially when one considers that these are crops of distant images and thus would be comprised of fewer pixels. In addition, and while cognisant of the fact that there have been vagrant Yelkouan Shearwater records accepted as far north as Britain, likelihood would strongly favour a paler Balearic in your location.
Of course, I would be the first to admit that I have a lot to learn about these birds, and look forward to any other opinions once the workings are shown, as it were.
Regards,
Harry

To me they look like the are flying together and not as separate individuals. The left hand bird I think, is at a slightly different angle, thus reflecting less light back to the camera. I think they are the same species.

I've got very limited experience of Balearic shearwaters (from SW Portugal), quite a lot in the past of Manx, but none of Yelkouan.
The left hand bird looks good for Balearic which I think everyone agrees with. To me the right hand bird looks paler than any Balearic I've seen, and if it looked sufficiently different for Luis to note it in the field, then its probably not an artefact of the camera. As others have noted though, its not that pale, and the dark under tail rules out Manx.
However, Balearics look 'corpulent', while I understand Yelkouan (like Manx) are more slender - so if the right hand bird looked more corpulent, it can't be either of those species.
If it has the body shape of a Balearic and the plumage of a slightly smudgy Yelkouan, is it a candidate for 'Menorcan' shearwater? Appreciate this isn't going to be separable with confidence in the field.

P
Cruise to Madeira, the Canaries and Lisbon