Possible Gadwall/Mallard Hybrid? And a couple of questions... (1 Viewer)

I was in Sefton Park in Liverpool (UK) before the big match yesterday (Fa Cup winners! btw) and was with the family so I only had a compact camera at hand so re the quality of the photos.

Anyhoo, saw this Gadwall - quite unusual for the park - and noticed that it didn't have a completely black bill so was thinking that it could possibly be a hybrid (?)

I also noticed that this Gadwall was in a small group of 3 which included a female Gadwall (couldn't tell if it too was a hybrid or not but it didn't look like one) and a drake Mallard - these 3 were definitely in a group together.

Now, I have never had a Gadwall come within 5 meters of me never mind 5 feet (people visiting the park tend to feed the birds so the majority of birds will 'approach' people at the waterside looking to be fed) as the female gladly approached me to virtually touching distance whereas the male came within 5 feet but he was a bit skittish to be honest - so is this usual behaviour (though not in my past experience) for Gadwall? Or if it is a hybrid then could it be adapted/adopted behaviour of some sort?

Also, the male seemed to have a bald patch at the top of his head so what could have caused this? Parasites? Or is that a question that is just to difficult to answer as there could be many an answer? I've never seen a bald patch like that before on waterfowl. 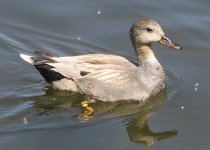 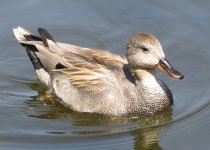 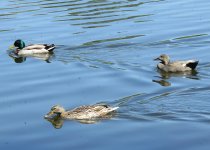 Some male Gadwalls in eclipse plumage have a female-like bill, like your bird (a straight orange ridge). Please compare: 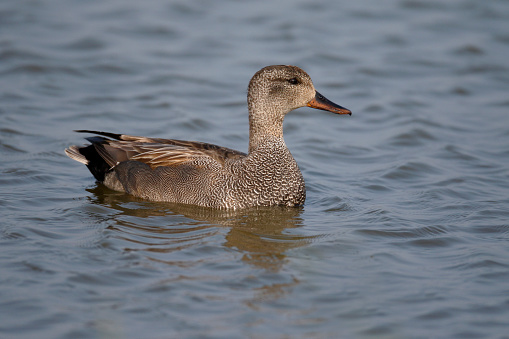 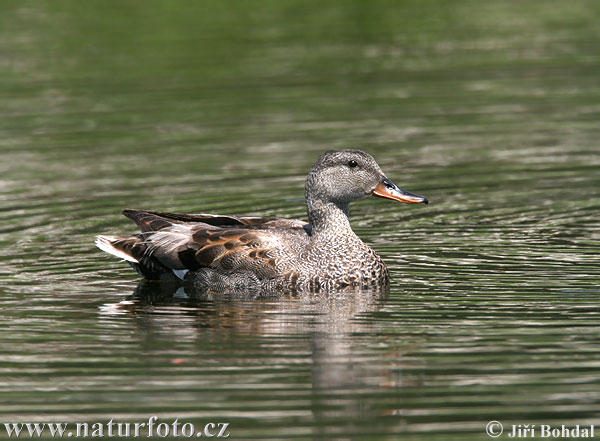 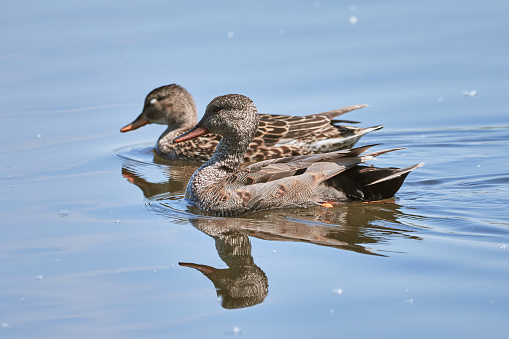 But is this typical Gadwall behaviour? To approach humans for food?
All of the Gadwalls I've ever come across have been really skittish - well, until now.
A

On such locations, you can expect escaped (and then sometimes staying longer) and wild waterfowl species that joined the local birds and then (appearantly) become tamer and then can stay some time (or even longer). Or they cant cope with human presence/disturbance and leave the lake (that was my gut-feeling/assumption from observations on similar places mainly in Mannheim and Heidelberg and elsewhere)

Your Gadwall is one more example for this.

Thanks Alexander - yes, I was thinking along the same lines

Some nice photos there.
I've even seen Goosander become more tolerant of people too - and once witnessed at first hand a young Cormorant on the Leeds/Liverpool canal who quite happily swam around right in front of me diving for food and resurfacing a number of times totally seemingly relaxed with my presence.

HI Richie, firstly congrats on Liverpool's double, hope things continue in the same vein.
Most male hybrids with one part Mallard show curly central retrices, I believe. That the feathered parts are completely Gadwall help show a pure breed Gadwall. I think, as Alexander has already said, the bill is same as eclipse pattern. May be this takes a lot of effort to change? As for Gadwall hanging around after most have left? Might have been injured and spent effort repairing itself, hence the retarded bill?
That last bits a guess. I mainly wanted to congratulate another nation's "red" team, mine's Aberdeen, historically we have won European titles too, so it's doable for Liverpool.
S

I don't see Mallard influence in this bird, but I wonder if it could be a very advanced "intersex" bird (Intersex birds (and their confusion with hybrids)) due to brown on head (could be the last remnants of female-type plumage), female-like bill and the breast looking more strongly "vermiculated" than usual which maybe recalls the "zebra" barring found on several intersex dabbling ducks as seen at that link?
B

Why not just a 1st-year (and thus perfectly normal) male gadwall.

@andy - yes, the lack of 'curly bits' troubled me it's true.
And thanks for the congrats on my team (and birthplace) doing the (so far) cup double
Wasn't it the mighty Real you took to the cleaners? Though we still haven't forgiven you for giving a certain Mr Fergusson his managerial training for which we sorely suffered under for too long a time
That's an interesting thought Steve but as Butty says along with the majority, the consensus seems to be that it is a straightforward Gadwall - though a friendly one at that!

RichieTwitchy said:
@andy - yes, the lack of 'curly bits' troubled me it's true.
And thanks for the congrats on my team (and birthplace) doing the (so far) cup double
Wasn't it the mighty Real you took to the cleaners? Though we still haven't forgiven you for giving a certain Mr Fergusson his managerial training for which we sorely suffered under for too long a time
That's an interesting thought Steve but as Butty says along with the majority, the consensus seems to be that it is a straightforward Gadwall - though a friendly one at that!
Click to expand...

Yeah, then Hamburg in the Super Cup. We knocked out Bayern Munich on the way too. A great period for Aberdeen. You might have got Fergie too, but you chose King Kenny, after Joe Fagan left.

normal male gadwall also to me. Bill coloration in males changes towards summer.

the female on the photo with the male mallard and the male gadwall is also a clear mallard, not a gadwall!