I am a long time Dutch birder, 40 years plus, but very new in the world of thermal scopes. These scopes have been used by wildlife managers and researchers for some time now. For example, to spot and count nesting locations of meadow birds or reed birds from the ground but also from the air. For us bird watchers it is something new, but it is growing more and more.

First of all, I have to mention that I went into this test completely neutral. I have no connection whatsoever with these two brands. As binoculars I use a Swarovski NL Pure 10x42, my trusty Zeiss 10x40 Dialyt BGA-T and I have a Swarovski ATX 85.
Jan van Daalen of House of Outdoor in Maarssen, The Netherlands gave me these two thermal scopes to test for a weekend. That actually worked out well, because I was planning to go to the National Park Veluwezoom and my home ground The Oostvaarderplassen.

Set up:
First of all, I had to set up the Wi-Fi on both devices and find out how the buttons work. This was quickly done with both devices, although I found the Lahoux's menu a bit more difficult. The buttons on top of the Zeiss are less fortunately chosen than those on the Lahoux. With the Zeiss I had trouble finding the on / off / standby button, because it is quite far forward. I kept grabbing the button to change the viewing mode setting. When you get used to it it will be fine and maybe it is a personal preference. You can easily switch both devices on and off to standby, so that the power consumption remains within limits. I found it annoying that when starting up the Lahoux, if the scope had been switched off completely, I had to turn on the WiFi again and again. For that you have to enter the menu every time. The Zeiss simply holds the WiFi and is connected to your phone every time. Both brands have an app on which you can see the image on your phone. That is nice for anyone who is birdwatching with you. With the Zeiss, however, you have an image across the entire width of your phone if you hold it horizontally and with the Lahoux the image remains a lot smaller and cannot be tilted. But not everybody wants to use Wi-Fi and without it the battery surely lasts very long.

On the road:
The walk went into National Park Veluwezoom and was from 8 AM - 3 PM. Both devices are light and easy to carry. The Zeiss has a carrying strap, which is a real plus. You always have the scope ready and can quickly switch between your binoculars and the scope. The Lahoux has no carrying strap, which is actually a downside. On the large plains of the Rheder and Worthrheder heathland, I was able to use the scopes well from a distance. At the edge of the forest at about 600m I saw a Red Deer. With both scopes easy to pick up and suprisingly there appeared to be six others half in the forest that I could not see with my binoculars. However in a dense forest it is more difficult to focus well and spot animals. Your brain thinks in color and the scope is in black/white. I was hoping that you could see through a dense pine forest to see Wild Boars, but that doesn't really work. Even if a Wild Boar or a Red Deer is masked by many, many trees or thick bushes, it is difficult to see the animal. Likewise, you won't find a Wood Lark that just landed in a piece of tall and dense purple moor-grass. And I think that will also be the case when you look for Bitterns or Water Rails in a dense reed area. The Black Woodpecker that I could not find in a tree, however, could be spotted.

In the evening I went to the Oostvaardersplassen for some night spotting. It was very dark and there was no light anywhere. I immediately found some Deer in the undergrowth, a group of Greylag Geese in a field, six Field mice crawling over a lying fallen tree and a sleeping Blackbird. The singing Cettis Warbler in a low bush was easy to spot, but when it went into the undergrowth it was very difficult to find.

Final verdict:
On paper, the Lahoux should be a better thermal scope given its specs, but I just really didn't think so. I found the image of the Zeiss overall to be sharper, especially in the white hot, black hot and red hot modes. I found the image of the Lahoux duller and there was less contrast. I am not sure why that can be given its larger and better sensor. The field of view of the Lahoux is also smaller than that of the Zeiss. The internal parts of the Zeiss probably do indeed come from China, but that does not mean that it is bad. I think all these thermal scopes, except for the Lithuanian Pulsar, are filled with parts from China. In addition, the Zeiss has a carrying strap and is also a bit lighter than the Lahoux, but that is of course also because the Zeiss is a 35mm and the Lahoux a 50mm scope. Unfortunately I was not able to test the new Leica Calonox or the Pulsar Helion 2 XP50 Pro. I expect a lot from both of them. Now Swarovski has to learn something from this and also come up with a model with all the good specs. Not too expensive, please. 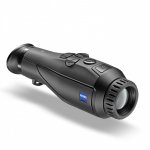 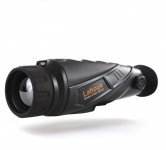 Belarus, that's a new mistake for Pulsar. I have heard people claiming they are Russian, Estonian and Ukraine, so the list grows C'mon, they are Lithuanian, is it that hard to check before someone writes it down?
D

opisska said:
Belarus, that's a new mistake for Pulsar. I have heard people claiming they are Russian, Estonian and Ukraine, so the list grows C'mon, they are Lithuanian, is it that hard to check before someone writes it down?
Click to expand...