RUHU and the OCWA (1 Viewer)

Let me rant a little, let me get it out......I'm stressed and I think this will help.

So, I got this rogue Orange-crowned Warbler....he's been with me since the fall, he nothing but a pain in the a$$.

First it was the Bewick's Wren; he followed 'em around, stickin' to 'em like glue, mimicking their every move. Weaving in and out of the dead Turks Caps and Flamed Acanthus, exploring every inch of the brush pile and stag stand. Eventually he wore 'em down, haven't seen the Bewick's Wren in over a month. The problem was, the BEWRs were house huntin'....they hunt early in West Texas. I had their houses up, two choices to select from, both covered with a good bit of brush; not easily detected by Blue Jays.

Now he's tormenting the RUHU; my juvie 1st year female, my Rufous Hummingbird who decided to winter-over in my yard.

Until now, I've let the OCWA be an OCWA.....but today I had to intervene, I had to shoo it off. The guy wouldn't take a hint, it took multiple shooings.

We're in the middle of an “unprecedented” winter storm, I think all of Texas is. Been going on a few days, today is the first it snowed, the most snow I've seen in the past 18 years...before that, I wasn't here.

Now, the OCWA has laid claim to each and every twig....snoozing in between sugar water feedings, with his head in his feathers....making it evident; he's here to stay. 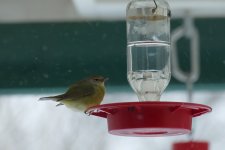 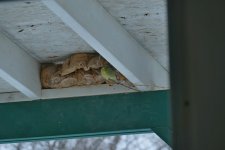 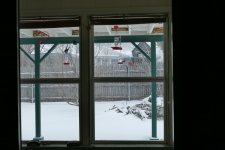 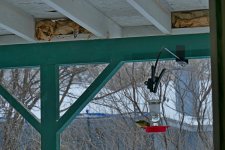 San Angelo, Tom Green County, has no documented wintering-over RUHUs. That said, I'm doing my best to make her stay comfortable. She been here over 89 days, today's; the 89th day as documented on eBird but she's been here longer than that. I know this cuz I ignored her when she first got here. Back then, at the same time, I had 3 Anna's Hummingbirds in my yard; 1st recorded sightings of Anna's for TCG. I'm guessing the RUHU has been here about 113 days or so.

The ANHUs were with me 36 days, last one left on the 8th of December. 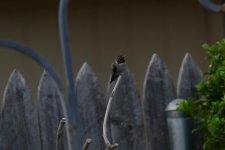 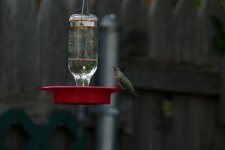 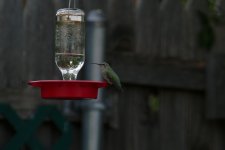 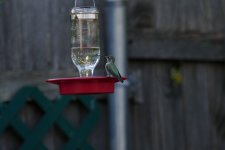 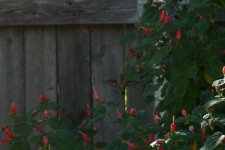 So, the temps are in the teens (Fahrenheit), it's snowing, about 6-8 inches on the ground, and the feeders freeze in less than an hour. I bring 'em in, thawin' 'em out and change 'em out hourly. 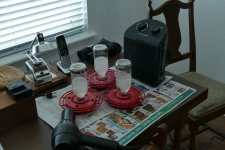 I guess that's it......I'm just kinda stress having to deal with OCWA, the freezing tempts, the snow......but it's kinda fallin' off a little now that I laid it out.

I'm still worried the RUHU won't make it through the night, she spent a lot of energy and time flying in this blizzard, and not drinking from the feeder due to the OCWA. 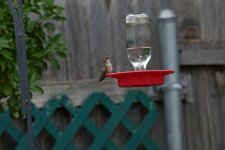 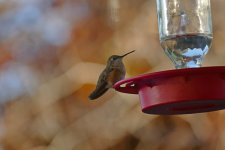 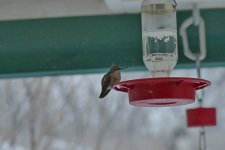 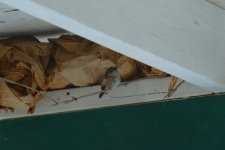 Thanks for listenin'.
S

I'm gettin' a little long in the tooth so I tend to ramble and rant more than I use too. I'll say my piece but at the end, I have a question. I'd appreciate inputs, hearing your opinion.

My RUHU didn't show up the next day. I'd like to think it flew south, as a pragmatist I lean to the contrary.

I left the feeders up all day, rotating when frozen. The OCWA was appreciative. I also put one out this morning; no hard feelings.

Before the blizzard, eBird showed two other RUHUs wintering-over; one farther north, just above Fort Worth and one farther east near Waco.

Neither bird returned after the blizzard. It was snowing at 6pm on February 14th with 6-8 inches on the ground. The night temps were in the single digits. In the morning we had 10 inches of snow = total.

The following day, Texbird listsevr, had reports of “missing” RUHUs in Austin as well as one SW of San Antonio. The good news is; there was a report of an RUHU on a feeder NW of Dallas.

Additional RUHU movements were noted in the Huston area, Gulf Coast, and LRGV; either absence of/or recently found. Not sure where the snow line stopped but freezing temps were recorded in Huston and the LRGV.

My records show October as the last sightings of the year for BCHUs and RTHU. RTHUs are local residents, BCHUs migrate through.

Sightings of RUHU have become regular during migration, last of the year; November, usually.

Should I pull my feeders at the end of October?

Am I encouraging the late migrants to stay with the feeders hanging?

Into December, there's still a lot of blossoms on the Flamed Acanthus, Turks Caps, and Autumn Sage. Whichever hummer comes through, in November/1st part of December, it will have plenty to feed on.

Here's what happened this year:

In November ANHUs came through with RUHUs causing me to keep the feeders hangin' after the flowers died. It was an unconscious act; I enjoyed watchin' the hummers.

Without taking it into consideration, was I encouraging them to stay and live off the feeders; which is what they do during winter-over?

Is this a real thing, am I over thinking this?

I'm concerned I'm making this about me and not about the birds.

That's it, simple question; when and why do the feeders come down?

May 29, 2021
BruceBerman
B
W
Anyone else get Orioles at their feeders?

Nov 23, 2021
SteveEarsom
S
E
I think I did something terrible out of ignorance.

B
Advice appreciated re setting up hummingbird oasis, please