I loved the Phalarope too, and the cuckoo - very nice pictures overall! Glad for some good sightings!

Many thanks for all the kind comments. I continue to cower on my sofa from the heat of a blistering May, but do have some shots of the commoner resident birds which i have not previously posted here.

First up, this newly fledged Plain Prinia jumped up right next me to in a stand of grass along one of the drainage channels. It's rare that I pay much attention to them as they are pretty common, but this one was not to be ignored and hung about for a few shots. 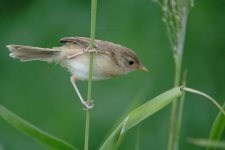 Another bird that often receives limited attention from me are the Barn Swallows. Rather than looking at them I usually search through them for Red-rumped Swallows, San Martins and and Asian House Martins and as such they'd be entitled to feel a little neglected. However they can be pretty approachable, sitting on low-hanging wires or the nets the fishpond operators use to concentrate the commercially sized fish. They also breed in the village and are here through most o the year so we gert a range of plumages from pristine to downright scruffy. 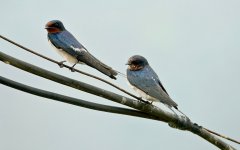 Asian Koels love the fruiting banyans that can be found in a few spots around the site. They're one of the birds that you really need for a big day list and inspiring when they sing - blaring out the familiar "Ko-ELL ... Ko-ELL" call they can be pretty easy, but they are much more difficult if not calling. Oriental Magpies are another resident that occurs in lower numbers and do not always shows when I'd like them to. Commoner that Red-billed Blue Magpie but significantly fewer in number than the 20-strong flocks of introduced Azure-winged Magpies they're another bird that rarely catches my attention. The one in this shot did for its grubby brown belly, and I was delighted when its head turned and I was able to separate the black eye from the black hood, making a subtle, but nicely logical focal point for an initially odd composition.


And lastly, not quite a resident, but certainly seen in almost every month of the year Common Kingfishers sometimes allow close enough approach to allow their full beauty to be captured. The two very different shots below show a bird hunting for a series of poles - also used for corralling fish, and the other a more intimate moment of a wonderfully tame bird perched above one of the lotus ponds I walk past on the way in from the road. Unfortunately I've lost the sharpness of the original in the cropping, but decided to retain it for showing thow different the change of angle and lighting makes it look from the other one.

Lastly, the truly resident Pied Kingfisher. I see them on pretty much every visit, but had never had more that three or four together anywhere in Hong Kong, so I was delighted to come across a gathering of six birds on the northwestern most fishpond on the site. The shot of six together was not a great picture so I'll post the somewhat better if not actually competent shot of five here.

Supporter
Its a good thing to take the time to just appreciate the common blessings around us. TFS
G

Nice to see the common birds well and with appreciation! I'm always pleased to see the female Koel - and to get a nice pic is great. It's a nice comparison too to see the Kingfishers' coloration change with light direction. And wow - that's a lot of Pied Kingfishers - could it be a family?

The big show-offs of April are the Whiskered and White-winged Terns. Very often hey focus their attention on a particular pond which means they give absolutely breathtaking views and they fly their feeding circuits, coming right up to or even over the edge of the pond. The Whiskered s are much more numerous, but on the day I failed connect with the Pectoral Sandpiper a group of eight White-winged Terns were hunting over the same pond as 20 or so Whiskered Terns, providing fine opportunity to improve my bird in flight photography skills.


Not to shabby - though I do say so myself!

Supporter
That one must have had a case of it's eyes being bigger than what it could lift. It looks like whatever it briefly snagged almost rolled him completely over! Good flying skills to have recovered from that one!
E

Owen Krout said:
That one must have had a case of it's eyes being bigger than what it could lift. It looks like whatever it briefly snagged almost rolled him completely over! Good flying skills to have recovered from that one!
Click to expand...

More optimistically, you have to try. Perhaps a miracle will happen.
Having seen a Black Crowned Night Heron pulverize a rat weighting perhaps half their own against a rock here in NYCV, only then to swallow it whole,
I no longer squirm if a bird takes on something bigger. Birds are hot headed predators and sometimes it works out for them.