More than two years ago the Tring Museum received from Mr. E. André, of Trinidad, a skin marked "♀," which had been taken at San Felix, Cumana, Venezuela, by Mr. Caracciolo, and therefore we name this species in honor of Mr. André
Click to expand...

Taeniotriccus andrei is named after Mr. E. André, of Trinidad, its discoverer.
Click to expand...

The Eponym Dictionary of Birds claims:

The Key to Scientific Names

André, Eugène (1850–1922)
Eugène André is often confused with Édouard François André mentioned above; for example, in some sources he is erroneously credited with the discovery and introduction of Anthurium andraeanum....
Click to expand...

So no idea if born 1850 or 1861. Maybe it will be solved here? I would say he was definetly in Trinidad (and not just may been). Death notice here

Andre, Eugene, collector of orchids and tropical plants, died December 30 at his home in Trinidad, West Indies, aged about 60. Mr. Andre had been a special collector of orchids for Sander & Sons, the European specialists, working chiefly in South America.
Click to expand...

Well its not impossible but his mother would have been 50 in 1861?
Anne Magdeleine Suzanne Caracciolo b. 3 Jan 1811 Trinidad and Tobago d. 7 Sep 1866 Trinidad and Tobago: Simon, Hurd, Dolan, and Related Families History .
In the OD it says bird given by Eugene to Tring but collected by Mr. Caracciolo. I think this was collector Henry Caracciolo (a cousin?) from Trinidad. Both collected birds for Rothschild.
https://digitallibrary.amnh.org/bit...pdfSource/bul/B257.pdf?sequence=1&isAllowed=y .
Andre wrote a book about the trip he collected the swift.
The Caura .
P

So Henry Caracciolo (1859-1934) was Anne Magdeleine Suzanne Caracciolo di Brienza 2nd cousin once removed and hence Eugene André's 3rd cousin once removed if I have the relationships correct. It was Pierre Bélisaire André (1801-1891)'s father Jean Jacques Andre (about 1781 – 15 January 1852) who emigrated to Trinidad. I suspect this is "Virginia" in the pre 1776 sense (ie east of the Mississippi).

"Our" Eugene André is/was also mentioned (without any years) in Steven L. Hilty's Birds of Venezuela (Second edition 2003), in the introductory text History of Ornithological Exploration in Venezuela.

... Eugene André collected at least 1600 bird specimens between 1897 and 1901, as well as orchids, butterflies, and mammals. Most of his specimens went to the Rothschild Collection, but on André’s last expedition, in 1901, six men died and all of André’s specimens were lost in an accident at a falls on the upper Río Caura. ...

A Photo of him (below), from here. 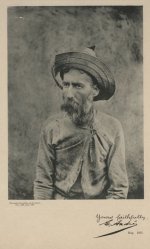 He's as well, just like Mark pointed out in post #2, the Author of The Caura; a narrative of a journey up the Caura river. With a map, and accompanied by a portfolio containing 29 plates illustrative of the trip (Trinidad, printed at the "Mirror office", 1902). Hathi trust entry here, though only with limited access "Public Domain in the United States, Google-digitized".

Either way, hopefully of some use/help?

Below is the first part of a local Death notice, published in The Port-of-Spain Gazette (Trinidad), on Friday, 31st of December 1922, (here , on p.12, the first part of it attached below). Note the sentence/Phrase: He "was born in Trinidad and had he been spared to see Thursday next would have attained his 61st birthday." 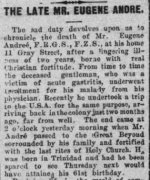 That it's about "our guy" is crystal clear from the rest of it ... 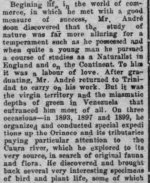 So Eugene André (1862-1922) and not French. If anything I would say British given his education or Trinidadian...

In the World Who's who in Science: A Biographical Dictionary of Notable Scientists from Antiquity to the Present, Volume 2, 1968
https://books.google.com/books?id=CZNNAQAAIAAJ&q="André eugene"
we get:

Here (volume in BHL already mentioned by Björn) another picture of him.
P

Hmm also the first Thursday in 1923 was the 4th of January.

Björn Bergenholtz said:
Minor comment: If he died (in the early morning) on the 30th December, with the death note published the day after, on Friday the 31st of December (New Years Eve), I would think that the next following Thursday ought to be the 6th of January, wouldn't it?
Click to expand...

Björn Bergenholtz said:
Below is the first part of a local Death notice, published in The Port-of-Spain Gazette (Trinidad), on Friday, 31st of December 1922, ...
Click to expand...

Ought to have been:
Below is the first part of a local Death notice, published in The Port-of-Spain Gazette (Trinidad), on Sunday, 31st of December 1922, ...

(I took the date from the paper itself (at Documentos de la Colección Ornitológica Phelps - Colección Ornitológica Phelps (Fundación WH Phelps) ), without actually noticing that it was emended to 1945 in Mark's post. It's in the Nov-Dec 1944 issue of the journal. But, indeed, as it cites a paper, on p. 427, which appeared in the previous issue of the same journal, and is presented there as published in Jun 1945, it must have been issued later.)

Thanks, Laurent, but note that Phelps in that Paper didn't tell us more than the years (of Birth and Death) of Mr André, no exact dates.