Sharp-shinned or Cooper's in Texas? (1 Viewer) 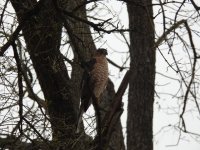 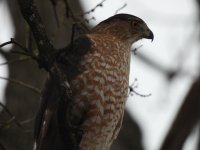 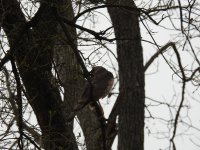 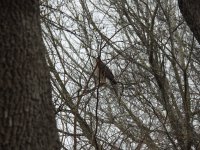 Title says it all. He was being shouted at by a nice little collection of birds: blue jays, yellow-rumped warblers, Carolina chickadees, what I think may have been a titmouse, and a very upset ruby-crowned kinglet. Looked to be about the size of a crow.
Sidenote, what would be a good way to upload a couple of videos here? I took a few short videos of the birds accosting him, and got a decent recording of the interesting variety of sounds. The kinglet sounds like a ticking engine.
T

Excellent, thank you. I'll add him to my list of interesting predators found by following angry jays. So far, it's two red-tailed hawks, a screech owl, two great horned owls (or, probably, the same one), and this hawk. Plus several assorted cats, and a large rat snake. Screaming jays doesn't always indicate something interesting, but screaming jays, accompanied by other birds, almost always does. And I suspect that the few times it hasn't led to anything interesting, there was something and I just couldn't find it.

Appears to be a good month for you Tired

You're doing really well with your raptors Tired! 😉

To upload a video, use the movie camera+ icon on the tool bar - (you may need to press the 3 dots on the top row to reveal the icon - it’s next to the smilie) - it’s a drop down box like the photo one, you just click on ‘upload video here’ and choose from your photo/video files which to upload. Hope that helps.

Ah, no, only some of that was this month. One of the redtails landed in my yard the same day I found the screech owl, one sighting of the great horned was a few days later, and then this was today. The first great horned sighting was in January, and the other hawk and the rat snake were quite some time ago.

Then again, three daytime owls, a redtail in a tree, and a Cooper's in a tree is a pretty good crop for this year so far. I see redtails frequently enough, but it's nice to actually have them perched in a tree where I can enjoy them for awhile, rather than having a glimpse of them on the highway or high overhead.

I'm trying to make some notes about how to tell when jays are screaming at something interesting, and how to find exactly where it is. Jays who are too far from the mobbing to want to go and join often seem to call anyway, so there will be calls all over a radius of several blocks, and I have to figure out which of them are actually looking at something. So far, it seems that the best bet is to listen for the jays that are calling fastest and most insistently, look to see which ones are facing something and hopping around rather than just screaming into the air, check the area with the most jays in one place, and listen for other birds. If jays and other birds are screaming at the same time, that seems to be the ticket. The rat snake (not seen in February) had half a dozen species angry at it, and some of them even attacking it!

I've also learned that, just because they stop shouting, doesn't mean the predator is gone. It can also mean that they've given up on scaring the predator away (one great horned owl refused to move, and the jays hushed after about 10 minutes of it not responding), or that it's an owl and has successfully hidden itself like my screech owl did. It's worth checking anyway, even if they stop shouting.

Thanks for the tip on the videos, I'll probably upload these to somewhere. The focus is iffy, but all the upset birds are neat to listen to.

Average day with one exception