We have always had Sparrowhawks in the winter at my local spot in Nara, but they were usually flying fairly high so it's been difficult to get details. But in the last year or two, they appear to have been breeding nearby and have become more confident and pose well in convenient trees.

(The first five photos are from this month; the last two from February 2020 (this bird is around now, but these were the best photos I have).

These four photos show three birds which are often around together (sometimes all three can be seen on different trees at the same time), and seem to be a family. The first is obviously a male. I'm fairly sure that the second is female. I think the third bird (photos from front and back) is a juvenile - looking at books, the thicker chest barring compared with two seems to indicate juvenile. Am I right? And if so, are the white spots on the back of the bird in photo four a good juvenile marker? And is it possible to sex juvenile birds? 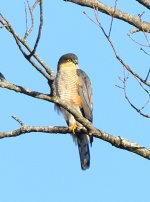 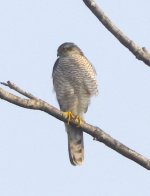 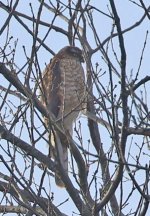 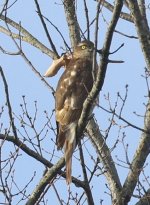 The male in photo one above has a large white bar across the back of its head. The juvenile has an incipient one. Some of my friends seem to think this is significant at a sub-species level, but I don't. 'Raptors of the World' seems to show it in male and female birds (but other books I have don't). Is it a normal feature of Sparrowhawks? 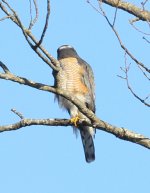 Question Three (the interesting one, I think, or hope):

For the last four years an exceptionally red male has been wintering here - it'a not an unworn version of the male above - they are obviously different and are sometimes seen on the same day. One of my Japanese books mentions a darker red form and says it is a 'continental visitor'. But there is no ssp given, and the continent is Eurasia, so in theory it could have come from anywhere between Shanghai and Calais. 'Raptors of the World' mentions and illustrates a slightly darker (than nominate) bird ssp melaschistos (though the darkness seems to relate more to the back of the bird) which it specifies as 'Himalayas / Western China' (i.e. not directly adjacent to Japan). Does anybody looking have any comments on this bird? 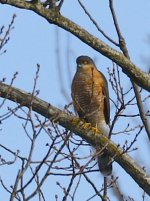 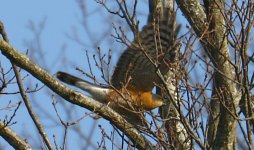 This morning, when I went to the same spot, some friends pointed out that one of our Goshawks was sitting in a tree. I took a couple of photos of the bird and it took off. But instead of just flying away, it went down to the pond, and attempted to take a Great Crested Grebe. This pond is fairly wide, but shallow (maybe 30cm in the deepest spot). The Goshawks take ducks if they can, but sometimes go for Great White Egrets, Grey Herons and Black-crowned Night Herons. Their technique is to dive on the bird from above, grab the neck, hold the head underwater for a few minutes until the bird has drowned, and then drag it to the side.

Anyway the Grebe flew off, chased by the Goshawk. I don't know if its escape technique was deliberate or accidental, but what it did was to land heavily on the water creating a huge splash which unsighted the Goshawk, and then to zoom rapidly away while the Goshawk was trying to find it through the spray. It survived. 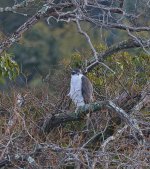 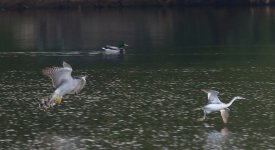 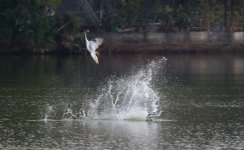 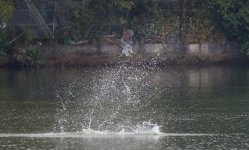 What a great link. I've never come across that site before. Thanks very much indeed.

MacNara said:
What a great link. I've never come across that site before. Thanks very much indeed.
Click to expand...

Indeed! many thanks!
Wrt the hunting behaviour, one year in the Etosha, Namibia, I watched a juvenile Lanner dive bombing an adult Helmeted Guineafowl, with no success. It was quite hilarious! The Lanner started its chase and the Guineafowl put a short sprint. This went on for about 30 secs before it eventually escaped by diving under a log and rejoining its flock where safety in numbers and the white spots must have a confusing effect as they returned back to the bush from the waterhole they were visiting. The Lanner returned to it's tree to rest. All part of the learning process I suppose. The size diffence was quite obvious, then again, I've seen a stoat taking a rabbit, a chase that spilled onto the road right in front of our car, so it is possible for far smaller hunters to take larger prey, as you have seen yourself above.