The following picks of a female or juvenile Sunbird sp. were taken at Al Hamra, near Nizwa, in northern Oman, in the morning of 5 august 2019.

I know that it should be a Purple Sunbird based solely upon distribution (purple being the only species breeding in the north), but it looks small, short tailed (moult?), short billed, strongly tinged yellow and with a pale supercilium, thus somewhat recalling Nile Valley Sunbird to me. The last is a rare vagrant in central and northern Oman, outside the southern desert areas: could it be a straggler?

Thanks for your opinions 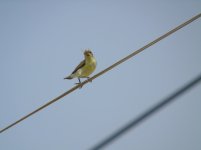 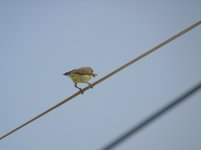 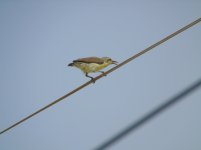 For comparison, this are photos of a female (juv ?) Nile Valley Sunbird taken in Mudayy, southern desert of Oman, in the morning of 13 august 2019. 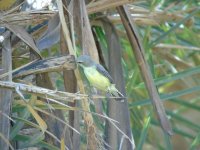 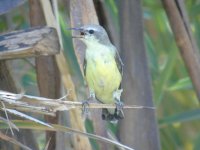 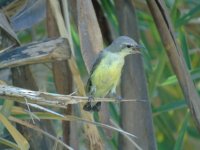 Purple Sunbird for me.
The position of the bird does not allow to fully appreciate the proportions.
Friendly
Jean
A

Agree with Jean Francois, definitely just a Purple Sunbird. The face pattern is clearly visible in the 1st and 3rd images.