Staff member
Supporter
You are welcome to join me on this sixteenth of a series of articles taking a look back over my shoulder at some sightings that have not only delighted us but startled and surprised us.

Let’s be clear about this, nobody expects snow at the beginning of May. Even in Scotland, May stands for spring weather, warmth, flowers bursting open and birdsong. And for much of our two-week’s holiday on the tip of Ardnamurchan in 2016, beautiful soft and gently spring weather is what we enjoyed. But in the middle, from nowhere came a Siberian episode. We couldn’t believe it when snow began to fall early one morning but, we thought, it surely will not last. It lasted 2.5 days and the snow reached a depth of 3ins / 7.5cm.

Now, before the snow arrived we were delighted to see that a pair of Greenshanks were visiting the shore most days to forage close to our cottage (see first pic and please make allowances for the pic having been grabbed through double glazing) which amazed us as although this species had occasionally visited the site in the past we had never seen them on a daily basis. What a treat it was to be able to observe these bird through my SF 8x42s day after day.

Greenshanks are one of our very favourite birds, being not only elegant of appearance but also a species that nests in gloriously wild habitats, a true spirit of nature. In front our cottage was an area of the upper shore consisting of a mix of sand-over-mud, through which ran a freshwater stream that led down to a sheltered channel filled to various levels by the sea depending on the heights of the tides. This variety of fresh- and sea-water habitats probably meant the Greenshanks could forage for a wide variety of organisms.

Take a look at the next two photos (complete with frisky Red Deer) and you will get a flavour of what the habitat was like where the Greenshanks foraged. Then take a look at the next two (also taken through wet double-glazing) and you will see how it changed. We thought the Greenshanks might abandon the site and head somewhere else in search of better weather, but to our relief they continued to visit and foraged despite the snow and fortunately, the snow soon disappeared (see final 2 pics).

Snow was absolutely not on the agenda when we visited Mallorca for a couple of weeks in 1984 and roamed the island in search of birds, orchids, butterflies and dragonflies. About as far away from our minds as the possibility of snow was the possibility of a close encounter with a pair of small carnivorous mammals. We visited the Albufera nature reserve on several occasions and on one really hot day, found ourselves tired and thirsty as we approached a stone-built bridge over a water channel and decided to take a break and sit on one of the stone walls that formed the sides of the bridge. We took off our backpacks and grabbed our bottles of water from them and sat down. The bridge was built on a slight rise over the channel and we realised this was quite a good view over the reserve and sat there watching out for birds flying over the habitat. We saw some egrets and a possible Squacco Heron and then our attention was grabbed by a kind of scampering-pattering noise close at hand.

We had no sooner started to look around for the source of the sound when two weasels came scampering up the slope and over the bridge in front of us, no more than 2 metres from us. We gaped in amazement as they reached the top of the short slope leading down from the bridge at the other side, and stopped. The rear-most must have been chasing the one in front because now they reversed roles and the one that had been in front turned around and chased the other back over the bridge. At this point they noticed our backpacks and cameral holsters that were on the ground and the cheeky little critters scampered over to them and proceeded to examine them closely. One of them stuck its head into the open top of Troubadoris’s backpack but they soon tired of this and were last seen disappearing into the reed beds nearby. We would have loved to grab a photo or two but we didn’t dare move for fear of scaring them away. However, the memories of those two delightful animals are still with us today and can still make us smile. I hope they made you smile too . 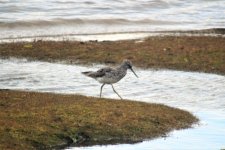 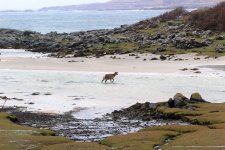 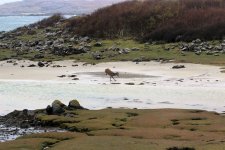 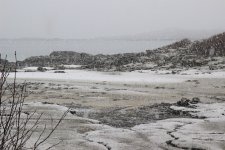 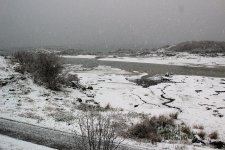 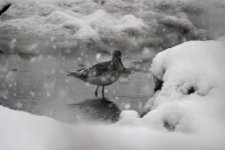 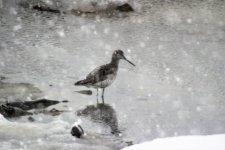 Surprises Through My Zeisses / 11 An Eagle, An Osprey, A Greenshank and a Stormcock

The Final Surprises Through My Zeisses / 18 A Shrike, Several Nightjars and Two Woodpeckers

Surprises Through My Zeisses / 1 Waxwings

Surprises Through My Zeisses / 4 Firecrest