I cannot really see a major and consistent difference in tail band, can you elaborate
But I cannot find any WWT with such a large breast patch

tconzemi said:
But I cannot find any WWT with such a large breast patch
Click to expand...

The wrong age and time of year but 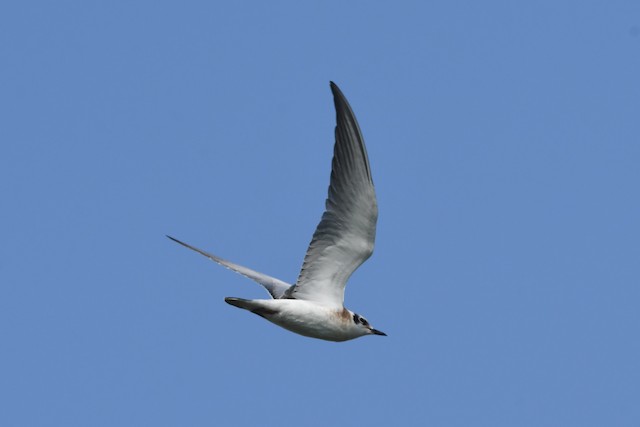 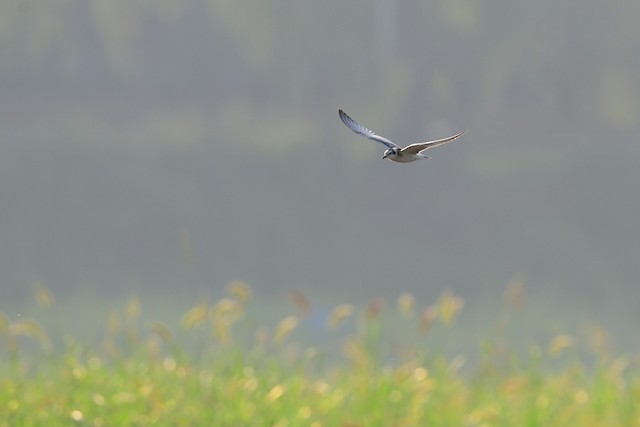 Deb Burhinus said:
There are features here that are not being considered imo - separating WWBT, Black Tern and Whiskered Tern is not so straight forward as is being suggested:
Click to expand...

Deb Burhinus said:
I am not 100% convinced the OP is a WT - there’s a lot of overlapping features with some point more towards one or the other.
Click to expand...

Well yes indeed, not straightforward at all
S

tconzemi said:
I cannot really see a major and consistent difference in tail band, can you elaborate
But I cannot find any WWT with such a large breast patch

Tom,
both of these birds are Whiskered Terns, not White-winged...

Photo "blacktern3" in the original post shows distinct, contrasting and thin dark tips to the tail feathers, which is typical of Whiskered (and unlike the examples of White-winged Tern posted here).

Himalaya: are the 3 first photos from one single individual? I'm asking this because on pic#3 (which shows a Whiskered Tern) it seems there's a dark spot on the belly that I'd expect to see also on the first 2 pics, but on those 2 the belly is just white, showing no trace of that dark spot.

smiths said:
Tom,
both of these birds are Whiskered Terns, not White-winged...

Photo "blacktern3" in the original post shows distinct, contrasting and thin dark tips to the tail feathers, which is typical of Whiskered (and unlike the examples of White-winged Tern posted here).
Click to expand...

Thanks for that, the saddle looked strange indeed
So all the juvenile Whiskered also showed bold pattern on innermost greater and medium wing coverts, might this help too?

smiths said:
Photo "blacktern3" in the original post shows distinct, contrasting and thin dark tips to the tail feathers, which is typical of Whiskered (and unlike the examples of White-winged Tern posted here).
Click to expand... 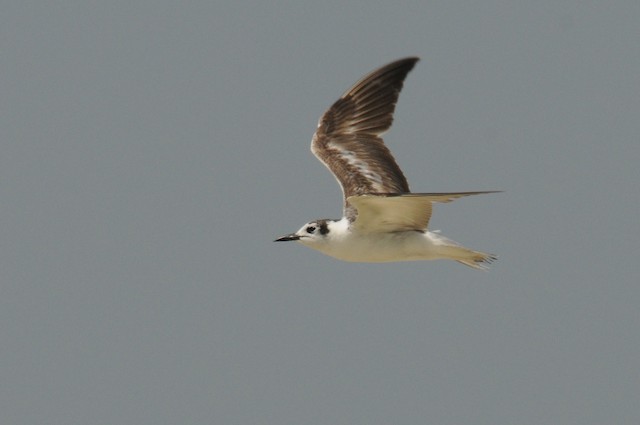 BB article (quoted previously) it seems has it’s ID criteria for separating these Marsh Terns confused because moult timing, rump/utcs/tail colouring and head pattern as diagnosed for WWBT in the article can be applied here producing ambiguous results, so I would be interested to know:

Given the BT/WWB Tern-like head pattern, (and putting aside the tailband - which looks rather an ambiguous diagnostic tool to me when using in photos where lighting can effect the impression) and the strong contrast between the lower saddle which seems to forms a solid dark line with the white rump, can someone please outline the diagnostic criteria, ruling out BT and WWBT, that I didnt address overleaf and so have missed applying here?
S

Deb Burhinus said:
I honestly am struggling to see any diference between the dark tips to #3 and in this image

For a start, it is probably not a good idea to compare undertail with uppertail, because you are then basically comparing inner webs to outer webs, which may have different pattern.
Even so, the pattern looks very different to me.
The WWT that you link to shows long dark streaks on its tail, covering at least 1/3th of the length of the feather.
It also shows a dark outer edge along the entire inner web of the outermost tail feather.
The bird in photo 3 of the original post shows small dark spots, covering perhaps no more than 1/10th of the length of the feather.
Furthermore, your WWT lacks the breast patch and shows completely different upperwing pattern than the OP bird.

The tail pattern is a well-studied and widely published field mark in juvenile marsh terns.
I am a bit surprised that you are questioning it.

smiths said:
The tail pattern is a well-studied and widely published field mark in juvenile marsh terns.
I am a bit surprised that you are questioning it.
Click to expand...

? You said a distinct thin dark tail band is diagnostic for Whiskered Tern - which I was not questioning (as I think you know ) I was questioning how apparent (and therefore how diagnostic in this case) the tail pattern was from the images we have been presented with - (vis a vis other marsh terns I and Tom linked to). The last image I think is overly dark anyway and is of a bird in January rather than October so probably not a very good example to compare upperwing pattern here.

For the sake of others reading this thread, can someone please lay out in very simple terms (apart from whether it has the tail pattern which has already been pointed out) what diagnostic criteria (above and beyond the ones I have already laid out based on the Shanghai images and the British Birds paper) make this a slam-dunk Whiskered? At least address why those other diagnostic criteria don’t apply please.

(The thin very black and distinct breast patch is supposed to be diagnostic for Black Tern over WT and WWT so some of these criteria are coming across as moveable feasts at times!)

Btw one of the WWBT Tom linked from the OBD shows a WT head pattern and obviously forked tail which should make it a WT rather than a WWBT shouldn’t it?
Last edited: Nov 28, 2020
S

You are making this more complicated than it really is.

I have no more to say on the ID of the terns here other than to say how problematic it is to ID birds from photos at times. At least two very experienced birders (excluding myself) and possibly other very experienced birders that have watched the thread without commenting) have either disagreed altogether or at least had some doubts as to the ID of this Tern - even Himalayan thought it was a Black Tern in the field, a reasonable assumption, given the very dark and distinct breast side/shoulder patch which everyone admits is unusual for WT or WWT.

In the field, I suspect that fishing technique, changing angles of light on feather parts and call etc would give a more complete picture. As it is we have 3 slightly out of focussed images and some doubt as to whether they are even the same 3 birds. In fact the tail pattern can only be seen on one of the images/birds and that’s coincidentally the only one where the head pattern and breast side patch/lack of, isn’t visible either. In fact there is only one feature of the conglomerate list of WT features listed above that can be seen in either the first or the second image, and that’s the breast patch. The rest of the features that have been used to ID the other two images are based on the third image only. In addition as pointed out above, the third bird/image shows a dark spot on the belly, so is it questionable that this may not the same bird as in the other two images. If this is the case, my main concern would be that the head pattern in the first two images, usually a fairly good distinguishing feature and one that led me to doubt WT, is rendered irrelevant.

The process by which Smiths concludes the ID, however, is indeed interesting and very helpful in providing an ID here - no doubt there will be a few others jumping in now to say ‘clearly a Whiskered Tern’ in the wake of this (with echoes of ‘I agree!’ ‘I agree!’) but I must say, I have never been accused of ‘over complicating’ an ID discussion before so that’s a new one to me 😂

PS Smiths - perhaps you could save us all a lot of trouble and give us an ID for the warbler if you know before that leads everyone down the garden path also - thanks 👍
Last edited: Nov 28, 2020
A

Thank you from me too to all who wrote here. It was very helpfull to me. I could place "thumps up"-Buttons on really all posts here, including the very detailed explanations by smiths and Deb and the additional pictures and comments on these!

Thanks. Please do not take my very succinct style of writing as an offense.
It is just that I have very little time (and, admittedly, patience) for lengthy discussions...

smiths said:
Thanks. Please do not take my very succinct style of writing as an offense.
It is just that I have very little time (and, admittedly, patience) for lengthy discussions...
Click to expand...

The warbler seems to show the warm brown wing panel, very pale lower mandible and pale legs/feet of Blyth's Reed and Large-billed Reed Warbler.
I have no field experience with the latter so cannot quite comment further.
Besides, I doubt the two can be separated except in the hand?
Last edited: Nov 28, 2020

(Assume you meant Large-billed Reed which is still afaik, localised at a few high altitude breeding sites outside of Pakistan but of its winter movements, it seems little is known.) 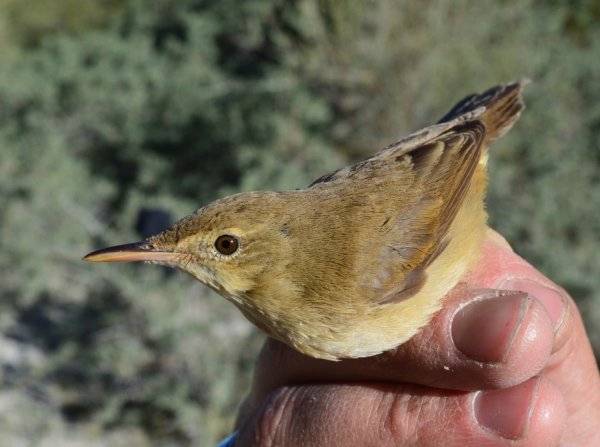 The breeding site of one of the world’s least known birds, Large-billed Reed Warbler Acrocephalus orinus, has been discovered in the remote and rugged Wakhan Corridor of the Pamir mountains of northeastern Afghanistan. The first specimen of...

Thanks so much for this! It is an eye opener. I think the Warbler is probably a uniquely photographed Blyth's Reed or Clamorous Reed.

Himalaya said:
Thanks so much for this! It is an eye opener. I think the Warbler is probably a uniquely photographed Blyth's Reed or Clamorous Reed.
Click to expand...

Cheers,
as per my question in post #25, are the 3 first photos (the tern) from one single individual?
You must log in or register to reply here.