The birds of Iran (1 Viewer)

Having just returned from 3 weeks in Iran I have many photos to post which, I hope, are interesting to fellow members of this forum. The first one shows one of the most common birds in Iran, the hooded Crow (known locally as the Kellargh). This bird, seen here in one of the parks in northern Tehran, was used to being fed by people and would happily perch on or near to people it knew. I was able to get close enough to take detailed photos however the bird wouldn't take food from me. Once I gave the food to the man the bird was perched on, the Crow took the food from him:

The most common bird in Tehran appears to be the House Sparrow. These are thriving and are far more in evidence than I've noticed in earlier visits. Possibly to do with the big green effort being made there (the many parks and flower borders at the side of all the main roads are well maintained, newly planted trees are in evidence all over the city). Hooded Crows, as above, are also common in Tehran, as are Pigeons. Other birds of note include the very vocal flocks of common Mynas (1st pic below) and, what I was told was a Myna sub species, but one which I don't have a formal I.D. for yet (2nd pic below). Any I.D. ideas on this one?
My travels took me out of Tehran, firstly to the town of Laversun to the north. This would have been great to spend time in with a long lens, sadly all I had was my 70-200mm + 1.4x TC. Ten minutes spent watching birds yielded distant views of a Heron in flight, a Buzzard circling and the Hoopoe seen in the 3rd shot below.
3rd port of call in Iran was the city of Shiraz in the south of the country. I took lots of images of the historic sites here (on my Flickr if anyone's interested) but few different bird species to what I'd seen in Tehran. Common Mynas were again much in evidence in the parks. I did see one bird which my guide wasn't familiar with (4th pic below) in one of the parks. It looks like a type of Flycatcher perhaps? Again, any I.D. assists appreciated. 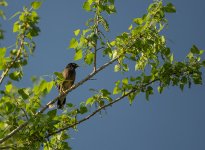 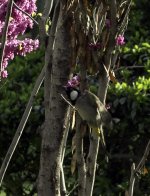 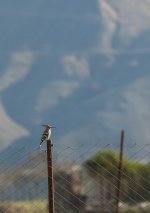 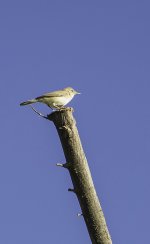 4th pic now identified as an Eastern Olivaceous Warbler (thanks to Omar in the ID section).
Last edited: Apr 20, 2014
N

Wow interesting i love these posts