In my last post, I ended by saying how reducing the power of the flash units increased the speed, but how it in turn led to other problems.
There are two main problems.
The first, obvious one is that there is not enough light produced by a single flash unit, or even two, to give a decent exposure when they are at 1/16th of the power. There are two ways around this problem. You can either add more flash units, or you can move them closer to the subject.
I actually bought a third flash unit, thinking that this would solve my problem, but then realised that to gain one more stop of light, I had to double the number I already had, going from two to four! This was starting to get a bit ridiculous.
The other way of obtaining more light is to simply move the flash units closer to the subject. Because of the inverse square law of light, if you halve the distance, you actually gain two stops of light. This was more like it and I tried moving the two lights just 18 inches from the perch.
It worked, but I was still not happy, as it gave a very contrasty light. Diffusers over the flash would probably work, but I would then once again lose light output.
Then I hit another, really big problem.
The flash was firing for just 1/6000 of a second, but the camera shutter was actually open for 1/250 of a second, this being the highest flash synchronisation speed for my camera. On a bright day, this was enough to give a second, ghost image provided by the daylight if the bird moved. The only way of overcoming this was to get rid of all ambient light, relying entirely on the flash to illuminate the scene.
Easier said than done. Even with the ISO as low as it could go and an aperture of F16, I was still getting ambient light on sunny days.
So, I purchased a set of neutral density filters to place over the lens, cutting out all daylight. On a really sunny day, I actually needed a three stop filter on the lens. You can probably guess the problem this gave. I now needed even more flash power to overcome the filter effect. Talk about going round in circles!
I did get some decent shots, especially on dull days and I persevered with the system for some time. I will finish off the saga of the flash in the next post, when I will explain how I overcame all of my problems with just one change. Until then, here is a particularly successful photo taken with reduced power flash. It was actually short-listed in the Amateur Photography Magazine's annual wildlife competition, competing against pictures of polar bears and tigers. 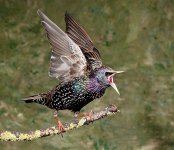 Denny · From Lincolnshire England
I am fairly new to bird photography, but have been a photographer off and on for quite a few years.
I am now fully digital, but being on a pension, have only a fairly basic kit. I just want to learn.

More about the flasher.