Thanks Jos - that Horned Puff Adder is just magnificent!

And further up the coast, Fur Seals at Cape Cross

A couple of videos from Cape Cross, give a better idea about the sight and sound of this impressive colony 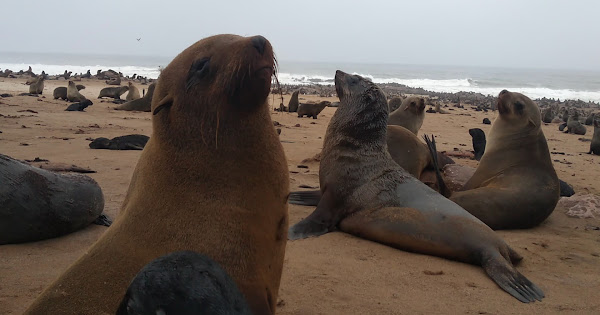 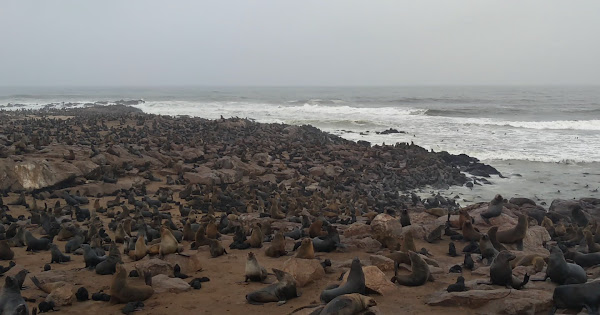 Some mammals on route to Sossusvlei 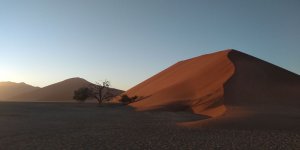 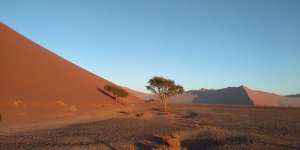 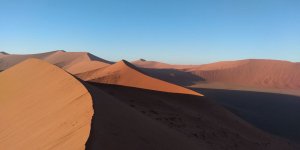 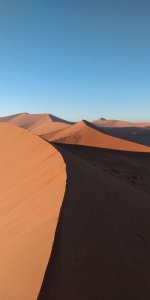 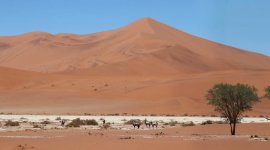 And the magnicent Sossusvlei itself

Fabulous photos. Are you sure your Bat-eared Fox isn't Cape Fox?

Thanks Jos. Great photos and information. Namibia is definitely on my list when I feel that it is safe to travel again.

DMW said:
Fabulous photos. Are you sure your Bat-eared Fox isn't Cape Fox?
Click to expand...

Catching considerably more water than the surrounding arid lands, the Waterburg Plateau is a slab of rock 50 km in length, 16 km wide and 200 metres high. As such, rising above the surrounding plains, the plateau serves as an effective rain trap, the result an island of moderate greenery, perennial springs at the base of the plateau supporting relatively lush vegetation.

Arrived in the Waterburg area about 10 am, hints of green far more advanced than in the lands we had left behind. And roadside, as well as umpteen Warthog and herds of Impala, quite an impressive showing of butterflies - in damp patches left over from rains in previous days, mass gatherings of whites and blues. Stop one, clouds of Brown-veined Whites generously dotted with Zebra Whites, Common Orange-Tips and African Migrants. To their side, Broad-bordered Grass Yellows and African Monarchs in good numbers, plus quite exquisite Hintza Blues and abundant Velvet-spotted Blues and Common Zebra Blues. Already highly active in the hot sun, quite a bit of effort to track down some of the more elusive species present but did eventually add several Dotted Blues and a couple of Gaika Blues, plus a Lemon Traveller. A few kilometres further, an even bigger conglomeration - talking salts from a rapidly evaporating puddle, again masses of Brown-veined Whites, Velvet-spotted Blues and Hintza Blues, plus two Long-tailed Blues and a Thorntree Blue.

After quite some delay due to butterflies, finally rolled into the grounds of Waterburg Wilderness, a private reserve at the base of the plateau, thick acacia bush home to White Rhinos, Damara Dik-diks and countless birds, the rocky slopes rising to the plateau supporting an entirely new collection of birds. Set up camp at the junction of the plains and rocky escarpment, then drove to upper camp and walked a trail close tobthe escarpment - had hoped for Rockrunner on this open exposed path, but pretty pointless in the heat of the day, (though I did see two African Hawk Eagles overhead). Returning, I took an alternative wooded trail, this proving far better for butterflies - here and in open areas around the camp, truly amazing numbers of butterflies! Heading the list, literally thousands of Brown-veined Whites, but also a very nice selection of extras - among many species, at least 30 Guineafowl butterflies, a couple of Wandering Donkey Acraeas, a Common Dotted Border and two Foxy Emperors. Also on the lawns of the camp, a tribe of Banded Mongeese, a half dozen Warthogs, a massive troop of Baboons and rather many Rock Dassies.

Added Kudu and several Damara Dik-diks en route back. The real treat however was awaiting back at camp - not only a family of Black Mongeese scampering by, but absolutely fantastic views of a Bushveld Elephant-Shrew ... big ears, oversize eyes and a wiggling trunk-like nose, what a classic little beastie!

Fantastic day. Kicked off at dawn with a pair of Verreaux's Eagles patrolling the clifftops, the skies beyond them full of Bradfield's Swifts and Rock Martins, soon after adding flocks of Rosy-faced Lovebirds and Damara Hornbills. And then, as the sun became hot, I once again turned my attention to butterflies - both along the entrance road again and at the upper camp and adjacent trails. Best day of the trip so far on terms of butterflies - a grand total of 25 species seen, including some very fine species, the absolute highlight being an oozing tree that attracted a nice selection of emperors - 12 Foxy Emperors, five Green-veined Emperors, three Demon Emperors and one fantastic Large Blue Emperor! Not bad for birds too - the highlight a Rockrunner that had the good grace to appear during a mid-afternoon break back at camp.

Just after sunset, concluded the day with three exquisite Lesser Bushbabies scampering around a tree. Saw them just in time ...a mother of all storms was already rolling in, thunder echoing around the valley, bolts of lightning illuminating the brooding skies. Made a dash back to camp, rain was now lashing down, the dirt roads soon turning into raging rivers. Piled into the tent, hoped it would hack the onslaught. Fortunately, despite several hours of rain and most of my campsite turning into a lake, all remained mostly dry.

Moderately clear skies at dawn, but mud wash-outs and water everywhere. Walked a 10 km loop through flat acacia woodland, a lot of fairly damp birds clambering atop bushes and trees ... Black-winged Kite, Damara Red-billed Hornbills, Jacobin, Diederik and Red-chested Cuckoos, Pearl-spotted Owlet, Common Scimitarbill, Purple Roller, Acacia Pied Barbets. With the rain, tracks of mammals largely obliterated, but lovely fresh pads of Brown Hyena soon discovered, a large individual plodding along a wet sandy track for a couple of kilometres. Even better, a few kilometres further, fresh tracks of two White Rhinos wandering up a track ... thought I had a good chance of encountering these and followed for a kilometre or so before they departed my trail. Spots of rain again, so quickly nipped back to camp before the heavens once again opened. On return to the rhino trail as the rain once again eased, low and behold the two animals had returned and gone back down the very trail I had just walked up! They could be no more than 45 minutes in front of me, but alas I did not find them, nor a third White Rhino that I also found tracks of. Still, gripping stuff to be walking in the lands of the giants. Despite cloudy skies, still some butterflies out and about - top of the lot, one more Lemon Traveller, a few Yellow Pansies, one Foxy Emperor and a couple of Wandering Donkey Acraeas.

With the rain turning the Kalahari sands into a quagmire, moving my car was no easy task! Uphill was impossible, and downhill seemed pretty likely to result in getting stuck too. Had planned to stay another night, but as dark clouds were threatening further downpours, thought it wise to attempt to get out while relatively dry. An hour of sunshine and temperatures close to 30 C did the trick ...firmed up the road surface just enough to get out, Otjiwarongo bound I was, rain falling again as I cleared the worst stretch of track.

Comfy night in the semi-luxury of the Out of Africa Lodge in Otjiwarongo, shopped up for the next stage of the trip, a week in Etosha.
You must log in or register to reply here.