Ospreys are amazing birds aren't they !?! 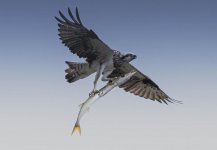 Sometimes I feel that the massive Eagles slaying foxes, kangaroos, and monkeys etc, the Powerful Owls, the Top Gun Peregrines, or even the shadowy Hawks, or zippy little Falcons, seem to get all the press .... meanwhile the Osprey just quietly and efficiently goes about its business.

I'm always amazed at how aerodynamically efficient they are, in the way that they seem to "surf" their prey as they fly away with it. (as indeed the rather lesser shot in my gallery is titled ! https://www.birdforum.net/gallery/showphoto.php/photo/510539/ppuser/92780

This picture by Christine Georgio, of a 2ft + (very toothy !) Pike is the largest prey I can recall seeing an Osprey with. Has anyone seen one fly off with larger prey? Feel free to post some pics ....... :cat:

A brilliant aerial image of this Osprey and prey and so beautifully captured CJ!!!

KC Foggin said:
A brilliant aerial image of this Osprey and prey and so beautifully captured CJ!!!
Click to expand...

KC, the above photo is a bit better than mine !

.... I was so cranky with myself for disturbing the Osprey I managed to snap (in my gallery), as it had what I thought at the time was a huge fish (probably a Bass, Redfin [exotic], or European Carp [another even more damned exotic] of around about a pound and a half ~700g). The poor raptors struggle so hard to survive, meal by meal - and here is this dopey photographer blundering along just as it was about to tuck in to a well earned meal.

Arrrgggh ! Kicking myself ! I only managed 2 reasonably in focus shots in amongst the 20 odd tree blacked out trunks that I shot as I rapidly panned along. 1 is in the gallery, and the other is the dirtiest look that the Osprey shot me over it's shoulder that I was too embarrassed to post ! :eek!: :-O

The above photo was taken by Christine Georgia of the Port Lincoln amateur photography club, according to the article I linked. I have no other way of linking to the source, but I've credited her and it's definitely her shot in the post above.

I've caught Yellowfin Pike before when fishing, and apart from the stink ! the thing that strikes you is their huge fangs !! The pike in this photo is a whopper - I don't know the weight ~ perhaps a kilo or more? It's an incredible catch for a raptor ! I'd be very interested from our many Osprey watchers to known if they've seen a bigger catch :t:

That has to be Photoshopped.

rollingthunder said:
That has to be Photoshopped.
Click to expand...

I've seen a female Little Eagle (max about 1.36kg =3lb) kill & lift an ~ 1.8kg (4lb) buck rabbit and fly off at least ~800m. I would think an Osprey would be capable of something similar - at least up to it's own body weight, though generally they are taking much smaller prey.

The Osprey I accidentally blundered upon, took off double time quick with its meal (perhaps ~half the weight of the one in the article) and flew down a river until it was out of sight - I know for sure that it didn't land for a least a couple of kilometers - 'surfing' its meal the whole way.

That's why I was interested if any keen and regular Osprey watchers had seen them catch and carry bigger prey ..... ?

If there's any keen fisho's on here perhaps they could offer a better guesstimate of the weight of the pike too ..... ? :cat:

Looking back through the 500-odd Osprey photos in the BF gallery, there are some impressive fish being taken by Ospreys :eek!:

The largest one seems to be this one in a photo taken by Stanley Jones https://www.birdforum.net/gallery/showphoto.php?photo=599575 though there are others that seem equally as big. It looks like this fish is ~32cm ~39cm, and I would guess about up to ~2~2&1/2 lbs ?

Other fish in a similar size range are good sized bream, and trout among others. Delia seems to have taken a shot of one of the bigger ones long ago .....

The biggest one I can find doing a Google image search seems to be maybe a fraction bigger ~2&1/2~3lbs ? That's getting up near the weight of a big female Osprey. I think the pike in the OP is under that, though it is certainly the longest fish there is a ready photo of ...... :cat:

I have seen Osprey at Rutland water with jack pike and large trout that must have weighed at least a couple of pounds. Pike are an ambush hunter, built for speed with very long and thin bodies. In my angling days I have caught many small pike up to 2-3 pounds in weight which were almost two feet long. Also due to the Ospreys unique talons allowing them to rotate their catch into an aerodynamic position this would make it easier for them to carry off quite large prey.

rollingthunder said:
That has to be Photoshopped.
Click to expand...

These pike certainly are eel-like. I'm not seeing any obvious photoshopping ....
Here is a link to a 78cm specimen caught and it seems to hold true to form
https://www.fishraider.com.au/topic/49794-jewie-and-monster-yellowtail-pike/ 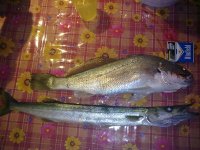 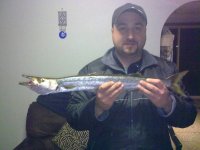 These birds are just absolutely M - A - D !!!
Check out this nutter as he pulls an absolutely huge trout out of the water .....
https://m.youtube.com/watch?v=yQOVcP67zFM 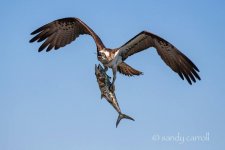 Recently, I was biking home, and I saw an osprey roosting on a telephone pole. I was able to get a picture of it with my birding camera which I had with me at the time. On closer inspection of the picture, I noticed it had a fish in its talons. A pretty decent fish for my area. 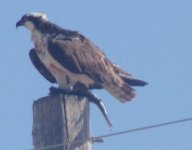 Being a fisherman myself, I was amazed that this Osprey caught that fish. I've never been able to get a photo of an osprey with a fish until now.

Closest I've ever gotten was a double-crested Cormorant swallowing an 8 inch trout until yesterday when I got this photo.

This is a camera review, but for fans of Ospreys very well worth watching with lots and lots of stills and close ups - there's some with a whopper fish too ! o
https://m.youtube.com/watch?v=O8DHe_tuOok

Actually the fish in the first picture is not a pike.
it is a barracuda species (Sphyraena sp.), but I don´t know which one it would be there.

and I think there is not much weight behind this fish, some of the others posted may be much heavier.

Sparrowhawk with a big problem . . .

Maybe the sparrowhawk had tried to catch a wader and had wet feathers or was even swimming, so couldn´t get away?
Or even a drowned bird?
wish I could read Swedish for the story behind...

Joern Lehmhus said:
wish I could read Swedish for the story behind...
Click to expand...

Just says "Have you ever compared the size difference between White-tailed Eagle and Sparrowhawk?"

The feathers look clean and dry to me, so I guess the swimming / drowning idea can be discounted

Joern Lehmhus said:
Actually the fish in the first picture is not a pike.
it is a barracuda species (Sphyraena sp.), but I don´t know which one it would be there.

and I think there is not much weight behind this fish, some of the others posted may be much heavier.

Barracuda are a heavier set fish than long-finned (or yellowfin) pike, so I doubt that is the fish in the first post.
Yellowfin pike as far as I know, and a fair sized one at that - Dinolestes lewini
https://en.m.wikipedia.org/wiki/Long-finned_pike 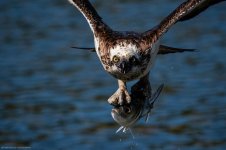 Chosun :gh:
You must log in or register to reply here.