I'd say you're correct.

Steve.Jonesy said:
Taken in June on the South West coast of Portugal
Can you I D thanks
Click to expand...

Thekla's looks a good call particularly from someone who lives with them rather than like me who sees them only on visits to Iberia (and unfortunately too few in recent years). The crest looks good for it. The head pattern looks more typical of Thekla's than Crested (but wear can do funny things) as does the streaking on the chest (although the fluffed up feathers don't help). The bill also looks short in this photo. It'd be a 'full-house' of Thekla's features were it not for that bill; the angle of the photo (and use of a telephoto lens?) make the length ihard to judge and, as I think my annotated enlargement shows, the lower mandible is subtly but distinctly concave. In Thekla's, it should be convex (or much less often flat). So in my view, the plumage details tend towards Thekla's but the bill shape towards Crested. Which of these is the surer guide to a birds identity has been a matter of debate here on BF (and elsewhere). I've certainly walked away puzzled a few times in the field from birds that seem to show a mix of features. Personally, I tend to go with bill shape as the angle of light & wear can alter our perception of plumage more readily than it can of bill shape. Additional photos would certainly help.

Hello John,
imo bill shape cannot be reliably determined from that angle. Also, only a few pixels (due to image quality) on the tip of the lower mandible are all we have to make a judgement regarding the shape and both mandibles cannot (at least to my eye) be delimited on this photo (too few pixels here, I'm afraid); the red lines are in fact overemphasizing features we actually don't really see, so those can be misleading. I noticed what you mention above before giving my opinion, but given shape cannot be reliably determined we have bill length, which imo is way too short (from frons to tip, taking angle into account) for any Crested. In doubt I'd leave it undetermined.
T

RafaelMatias said:
In doubt I'd leave it undetermined.
Click to expand...

Probably the best approach I'd suggest. For me the curve in the bill is more than just a photo artefact [see for example the shadow] and foreshortening from the angle of the photo means I can't accurately assess how long the beak actually is.

I agree, with that bill I don't think you can rule out Crested unless there are more side-on photos!

Hi Steve,
thanks for the additional pics. Although I cannot prove it, I still feel this looks better for Thekla's than for Crested. Plumage-wise I see theklae (especially on the pic the bird is scratching). The bill shape (especially the tip) can't be properly observed here for a subtle Id feature as this one is (except for typical/field guide individuals). As I was trying to say above, the bill tip can't be seen properly; in adult Galerida spp. both mandibles do not meet at a point on the tip: the upper mandible tip covers the tip of the lower mandible (as a "roof", if this makes sense); therefore pics of lower resolution may suggest something that may not be there.
Here's a photo of a theklae that imo looks similar to yours (there are other examples): https://flic.kr/p/6Sv26z in this bird, the lower mandible may seem straight or even minimally concave if seen at a lower magnification, but if you magnify it (click on it) you'll see the gonys/tip of the lower mandible, is actually convex and partially covered by the upper mandible. However that subtle shape cannot be objectively seen in your photos. It's no doubt a difficult species pair.
EDIT: another example here
Last edited: Jan 21, 2021

John Cantelo said:
in my view, the plumage details tend towards Thekla's but the bill shape towards Crested. Which of these is the surer guide to a birds identity has been a matter of debate here on BF (and elsewhere). I've certainly walked away puzzled a few times in the field from birds that seem to show a mix of features. Personally, I tend to go with bill shape as the angle of light & wear can alter our perception of plumage more readily than it can of bill shape.
Click to expand...

Only the bill then an issue? Because I agree, the plumage and crest shape (blunted) is fine for Thekla - all boxes ticked:


Given the variability in both Crested and Thekla bill length, perhaps this is a distraction here for some? However, because shape remains a constant presumably it’s reliable so depends then on how we interpret what we see in the image. (As we know, Thekla can have variably long bills - albeit, the bill looks pretty average to me and seemingly too short for even a short-billed Crested - and the shape of the lower edge of the lower mandible in image #1 is to difficult to judge because of the angle. However, the comparatively steeply curved tip of the upper mandible is perfect for Thekla imo. The upper mandible on Crested has a more gentle slope down to the tip than what I see here, (thus creating a much finer tip to the bill than Thekla) Therefore, even a short Crested bill is shallower at the tip than the bill of a Thekla but here I see the bill depth being comparatively deep at the distal end giving a blunted tip to the bill.

composite here 1-1a Crested 2-2a Thekla (although not the most straightforward example!) 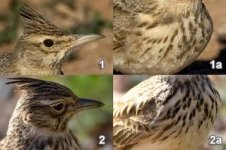 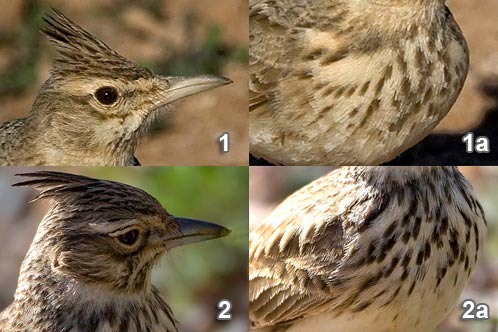 Crested Lark Galerida cristata Cogujada Común Possibly the most widespread and common lark species to be found in Andalucia. Most frequently encountered in lower elevations with more open habitats, often cultivated country. Very common along coastal areas. Heavy in appearance and during the...
www.andaluciabirdsociety.org

Given the plumage fit and the fact the bill length not only is not very crucial (given the variability and overlap) but hard to judge here due to foreshortening (as is the profile of the lower mandible) it really leaves it to a judgment on the angle of downward slope on the upper mandible. I can’t see anything to rule out Thekla on this basis and perhaps some evidence of over thinking in trying to avoid that conclusion..

Edit - I have just managed to open the second lot of images (I don’t know whether I was short on virtual memory but couldn’t earlier). Perhaps the tip looks marginally finer from this angle but still within range both in shape and length for Thekla imo. The crest and breast streaking certainly looks better in these images for Thekla

Wow so interesting, and thank you all so much for your expert knowledge and guidance. I feel I know so much more now about these amazing birds👌

The first image of the 2nd batch looks like the upper mandible is broken... 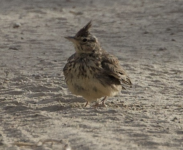 Brian J Small said:
The first image of the 2nd batch looks like the upper mandible is broken...
Click to expand...

I’m struggling to see that on my small screen (I thought it was background causing it to look a bit thin at the tip!) but if that’s the case, that supports Thekla even more imo with the tip being even deeper than it looks there.

RafaelMatias said:
It's no doubt a difficult species pair.
Click to expand...

Does the specific location/altitude give any clues here also? Would the exact location help?

Deb Burhinus said:
Does the specific location/altitude give any clues here also? Would the exact location help?
Click to expand...

I thought about asking, but thought also that it would be inconclusive, as both species occur in the SW. Habitat could give an indication as well, but where agricultural habitats criss-cross more natural and sandy areas both can occur in the "wrong habitat". But still it would be interesting to know the exact location, yes. More info usually better than less. There are areas of the country where only one of the species occurs, but the SW is a problem.

Costa Vicentina I think. But I can’t be certain as I travelled all down the coast South of Lisbon
Sorry
Steve

Thanks for the additional photos & Deb for her interesting analysis. More photos only tend to confirm that the plumage most resembles Thekla's and that different angles show that the bill is short for Crested although I'm with Brian (post 12) in wondering if the upper mandible is broken. As I recall I've seen birds with 'typical' Crested plumage and bills the right general shape not too much longer than this bird's (apparent) bill length. What does seem to be confirmed is that the lower edge of the lower mandible is concave which I generally find a strong pointer to a bird being a Crested Lark. It's been mooted before but I do wonder whether some birds showing a mix of characters (and some seem more problematical than this bird) indicates a mixed genetic heritage. As I noted above there continue to be some birds that I walk away from puzzled.

Two from Tunisia in Dec 85