The celebrated Spotted Eagle Tonn arrived at his wintering grounds El Hondo in Spain on 17th December 2017 for the tenth year having travelled nearly 4800kms from Estonia.

But he's more than three and a half months later than his earliest arrival date. The rigours of raising a family taking it's toll - or some other factors? 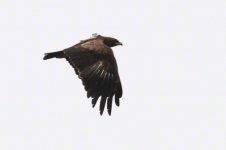 Is he missing primaries? Could this explain his late arrival?
Does anyone know when GSE typically moult?

I have only just got around today to checking Tonn’s progress this autumn (vainly hoping he might pass through our local watchpoint soon....). What do I find looking at the site Torchepot mentions? Tonn has just arrived back in his Spanish winter quarters this past couple of days!
Last edited: Oct 30, 2018

Interesting ... one of the better additions to the garden list in the parents place in SW France a few years back was a Greater Spotted Eagle one autumn. Will see if I can dig the date out and see if it tallies at all ...

Out of interest, presumably not many records of older birds (from eg ringing recoveries) of this species in the wild?

Not arrived in Spain yet for the winter, but Tonn is still going strong. Currently loafing around a forest near the Burgundy vineyards (and who can blame him?) on his leisurely journey south, see : http://birdmap.5dvision.ee/
So he’s missed my part of France again but maybe Rosbifs will be in with a chance down in the Pyrenees....

How accurate is the data? A couple of them did quite extensive sea crossings, at least one of which was totally optional/avoidable (Vija)

I look forward to seeing Tonn again at El Hondo next winter as this one is a write off. Love watching him come in to roost over the lagoons at dusk. Our planned trip would have been too early this year although I saw him in December a couple of years ago. He was in his second winter I think when I made my first trip to the area in 2009. Whats the longevity record on GSE? Presumably they go to 20-25?

Richard Prior said:
Not arrived in Spain yet for the winter, but Tonn is still going strong. Currently loafing around a forest near the Burgundy vineyards (and who can blame him?) on his leisurely journey south, see : http://birdmap.5dvision.ee/
So he’s missed my part of France again but maybe Rosbifs will be in with a chance down in the Pyrenees....
Click to expand...

Looks like he's on his way. Will keep eyes to the skies. Would love to see him!

He’s back in Spain now after a bit of dawdling in Burgundy, he passed directly over Clermont Ferrand earlier in the week and dawdled a bit more before speeding down past Carcassonne and crossing the border about 80kms inland yesterday to end up about 80kms NW of Barcelona.

Thanks Richard for posting - didn't come my way in the end... Next time.
M

Hello Marcelo and welcome to Birdforum ! It’s true, on checking the website ( see post 9 for that) I can’t find any trace, perhaps one of our Spanish Birdforum members has news on Tonn from his wintering site.

From 25th Nov. to 23rd Dec 2020 he’s doing his usual stuff near S. Agueda at El Hondo then nothing more!! I’ll see if I can get some news from someone local.

“Disappeared from the radar on 23rd December - it is assumed that he has been shot by hunters and the body and transmitter have been destroyed. A terrible shame, but that is Spain for you. That may be wrong and he may turn up in Estonia later this year, but it is not likely.”


I’m really hoping it’s a transmitter failure - but if it was he would still be seen sitting in his favourite tree. I spent many, many hours watching Tonn over several winters - it’s like losing an old friend. I’m really gutted, I never really understood how so much shooting was allowed there - in some ways it’s incredible that he survived as long as he did. Ominously there have been no sightings of any other GSE there in recent weeks either.
M

Hello Richard and Torchepot,
Thanks for your investigation Torchepot. Very sad news...
I used to follow his migration with birdmap and watch the webcam showing his nest ... I almost felt like I knew him personally ... I am upset...

Merci Torchepot, hopefully the female will find a new mate if indeed Tonn is no longer around as seems likely.

Marcelo25 said:
Hello Richard and Torchepot,
Thanks for your investigation Torchepot. Very sad news...
I used to follow his migration with birdmap and watch the webcam showing his nest ... I almost felt like I knew him personally ... I am upset...
Click to expand...

Found out a bit more last night. After the signal stopped moving a search was made at the last location - no sign was found except some used shotgun cartridges. Seems pretty final

I spent more time watching Tonn than any other bird I’ve ever seen in my life. Every winter when I got down to Spain my first thought was always to cycle out and look for him. I felt it was a great privilege to be able to spend so much time in his company. Year by year I learned a little bit more about his habits and had some very close and prolonged encounters.

It was always a relief to see that he’d returned to Estonia after each migration. I worked out once that he’d flown over 100,000 km on his wanderings.

Now in a pointless moment of ignorance and casual violence he’s gone. To say I’m upset is an understatement.

Richard Prior said:
Merci Torchepot, hopefully the female will find a new mate if indeed Tonn is no longer around as seems likely.
Click to expand...

maybe some comfort to be found in the thought that his genes live on and that the team in Estonia and elsewhere fight to protect them.

Interviews with Retailers: Jan van Daalen of House of Outdoor
2