Currently comparing the Sirui VH-10 and 10X Models side by side. Will take my time. One very surprising initial observation though = was shocked to find the plates are not precisely identical/interchangeable, although they look exactly the same. Noticed this when switching between mounts and with the 10 plate slid into the 10X there is definitely a few microns of slop when locked into place. Didn’t dare try it the other way as it might become wedged. This could also explain the issues others reported when trying to use other plates interchangeably with the 10X.

At first glance the build quality is superb and I like them both. The variable 10X panning tension is nice and certainly a bit smoother than the 10, especially when trying to make micro lateral adjustments under extreme magnification. The 10’s panning tension is somewhere around tension setting 3 of 4 on the 10X, but the 10’s initial lateral engagement is a bit less smooth. Will the 10X‘s more complex mechanism hold as firmly as the 10 under windy conditions or when triggering a digiscoped pic? We’ll have to see.

rpg51 said:
...Do any of these heads enable you to set pan and tilt stiffness for comfortable panning and tilting with separate knobs or levers, but then lock it with a different lever or knob when you are on a stationary bird and you want it to stay put, maybe to give others a look, or to adjust zoom and focus, without risking moving the scope off the subject?...
Click to expand...

The Sirui VH-10X has a lock that is separate from the drag control for panning, but vertical movement is controlled by single knob.


rpg51 said:
Does anyone here have experience using the 502AH with a big spotter?
Click to expand...

I have the Manfrotto 502 AH. It is very bulky, heavy, solid. It isn't elegant but it works. It has a separate lock and drag control for each axis, as you would like. My biggest problem with it is ergonomics. To use it as I prefer and like other heads (e.g. Sirui, or even other Manfrotto heads such as the 500AH), with vertical lock control on left side and handle on right, and with easy access to the panning lock knob, one has to use the head backwards by removing and reattaching the handle to the other side and flipping it 180 degrees. The head can be set up that way easily, but it is awkward to slide things on/off the quick release backwards. I wish the plate receptacle could be reversed.

So, the used 502AH arrived and it is broken and has to go back. The knob to tighten the plate clamp appears to have twisted off leaving the bolt tight and broken off flush with the body. It is going back to seller. However, now that I have it in my hands I see how large it is, (very large), and I've decided to go in a different direction.

Has anyone here used the Sirui VH-10x? Happy?
R

well...at 1.5 pounds I use this one all the time for the same purpose(s) as you are interested in. And I am a PhD field researcher with birds - and an educator too: 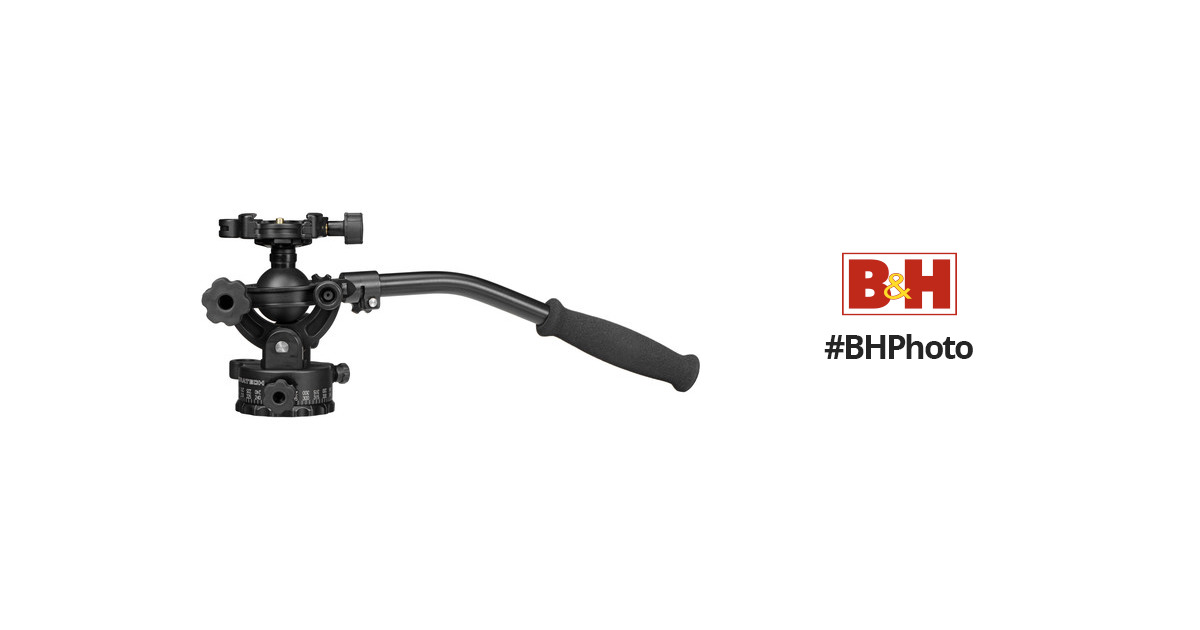 rpg51 said:
...The knob to tighten the plate clamp appears to have twisted off leaving the bolt tight and broken off flush with the body...

Has anyone here used the Sirui VH-10x? Happy?
Click to expand...

I can't imagine the amount of force required to do that. Bizarre.
As noted before, I like the Sirui VH-10X. It's not the perfect heavy-duty head for birding, but it is my favorite among what exists.

The acratech is too rich for my blood. Looks nice though. I'm going to order a VH-10x and try that.
A

Just spent some time with both the VH-10 and VH-10X this weekend. Neither is perfect but both are very good.

- Lateral Movement: The vertical movement is the same on both models and isn’t a true fluid movement, just set by the tension on the locking knob, but the lock disengagement it is gradual and not the “locked-loose” that would let the scope drop. However, the VH-10X has variable lateral resistance setting (0-3). I found the 10X panning noticeably smoother overall than the 10. The 10 is more challenging. In addition to having only one resistance setting it is also just a bit less refined, especially when trying to move a smidge at high magnification. However, I found when adjusting resistance on the 10X it took some lateral movement prior to feeling the new resistance level engage. Actually found myself using the various settings much more than originally expected. The 10’s single lateral resistance setting is somewhere between setting 2-3 on the 10X and I found settings above and below more useful for different panning situations. So, the 10X variable panning settings were much more attractive to me than anticipated.

- Compactness & Strength: The 10X is a larger and 1/2 pound heavier head than the 10, yet the 10 is rated to handle a heavier load. The 10 is smaller, lighter, and has a larger one-piece solid base. So, if I were looking to this head as my primary backpacking rig (might be a VH-5) or for a 115mm BTX the 10 would definitely get the nod.

Overall, I prefer the 10X for mostly short-haul use. It has virtually all of the features of the 10 and adds very useful varible panning resistance settings. Will be sending the VH10 back, and can envision a future purchase of a VH-5 for a more portable/backpacking rig.

Thanks for the write up. I have a 10x on the way for my "heavy" set up.
Does anyone know if there is an adapter that would turn the 10x into arca swiss compatible?

rpg51 said:
...Does anyone know if there is an adapter that would turn the 10x into arca swiss compatible?
Click to expand...

Yes. The Sirui VH-10X uses the same (wider than Arca) non-Arca sliding plate standard that is also used in many Manfrotto and Gitzo heads. I use heads with both standards but I almost exclusively use Arca-type plates (from Really Right Stuff, Kirk, Desmond) on my equipment. When mounting to a head with a non-Arca standard clamp, I use a plate adapter. I find that such adapters work perfectly. I use the short style (positioning it along a long Arca type plate at the point where it will be clamped) but they make longer ones now as well. My adapters were made by Desmond and only cost $12, but they are discontinued. They are the same design as the much more expensive (and also discontinued) Gitzo version. The same design is available from many vendors on eBay. They all ought to work very well as long as they are finished cleanly.

I see UTEBIT and even Sirui make a 50mm version. Which is going to work best - 50 or 120? Mostly I will be mounting a big scope with a sirui TY-70A plate, also, a bino tripod adapter.

rpg51 said:
Thanks for the post. Will this one work:

I see UTEBIT and even Sirui make a 50mm version. Which is going to work best - 50 or 120? Mostly I will be mounting a big scope with a sirui TY-70A plate, also, a bino tripod adapter.

No, none of those is what you need. Those are Arca-type quick-release clamps that come with plates. What you need is one of the adapters shown in my previous link. Since you seem to prefer Amazon, here is a link to the short style of adapter that I use. I think I have one from this brand (iShoot) and so far it has been as good as my Desmond equivalents, which were cheaper and that have been working for years.

Amazon.com
You may prefer the longer style adapter (iShoot 3950MFT) shown in my previous link output.

Thanks for the help.

I received a VH-10x today. I think this is the one for me on my heavy tripod. Pan and tilt adjustments work well. It is very smooth. The panning does not really 100% lock out. But it is very tight, and good enough for my purposes. The knobs are easy to find and operate. The overall size seems about right for the "heavy" set up. I may just remove the handle to get it out of the way. It comes right off. I honestly don't think I need a handle for what I do.

rpg51 said:
Thanks for the help.

I received a VH-10x today. I think this is the one for me on my heavy tripod. Pan and tilt adjustments work well. It is very smooth. The panning does not really 100% lock out. But it is very tight, and good enough for my purposes. The knobs are easy to find and operate. The overall size seems about right for the "heavy" set up. I may just remove the handle to get it out of the way. It comes right off. I honestly don't think I need a handle for what I do.

BTW - I'm not married to Amazon. Not even close.
Click to expand...

Glad you are liking the Sirui VH-10X.

If you get one of the adapters that I recommended, you'll see it will allow you to do what you are wanting. The adapter simply slips over the Arca-type plate to bulk it up to the size of a Sirui/Manfrotto/Gitzo plate. Once clamped, everything is secure. You could leave an adapter clamped in each non-Arca head. I find it easiest to pop the adapter off the head clamp (where it is stored), slip it on the plate, then put the combo in the clamp. If you mostly use non-Arca clamps, it is easiest just to keep an adapter on each plate. They just slip on, but they have a bit of spring in them to achieve a fairly secure friction hold on the plate when not in the clamp. In that case, slip off the adapter when using a head with an Arca-type clamp.

Up for sale is my E-Image GH06 video head with 75mm bowl (= ikan E-Image GH06 Fluid Head ). Very lightly used, the head is in excellent condition with no significant marks or blemishes that I can see (see photos). Comes with panning arm, plate and instructions and box, as new. Recommended by Gerald Undone and others as being best value fluid head.

Thanks for looking!
Gary in Canada

Oct 12, 2021
Adare
A
G
Winners Chosen - Next Drawing is May 4th for a sampling of the awesome new Athlon Midas Tripods