What kind/brand of binos are used by Jimmy Stewart in the Hitchcock movie "Rear Window" 1954
https://www.youtube.com/watch?v=w5pn48wzBuw
Stop movie at the very first second

or look at this

Hi,
Probably a standard 10x50 with regular eyepieces, not WA. Maybe Japan or U.S. made.

More interesting is the Exakta camera and possibly a 400mm f/4.5 Meyer?? lens. He uses this for his voyeurism.

There are numerous binoculars in movies and on T.V.
About 50% show a binocular of some kind. Recently I saw maybe a 20x80 Swift being handheld by a nosy mother spying from her car.
Jesse Stone uses a Zeiss Classic 10x40 possibly T*P*, probably Selleck's own binocular.

It reminds me of the older woman complaining about the young woman she sees behaving naughtily in her home.
But one cannot see anything, the officer says.
The older lady says that you can see everything with these binoculars if you stand on the table.

Often in movies it is a stupid red coated binocular monstrosity, which no self respecting spy would use.
Movie makers are pretty daft. But I suppose they think that is what the public want.

A British series used an early Canon 10x30 IS.

If it is a typical Zeiss style binocular, I would guess a Leitz 7x50 Marseptit. If it were made in the American one piece tube style, which is possible, then I would guess a Bausch & Lomb 7x50. Looking at this image, it is clearly American style. As the film was released in 1951, B&L makes perfect sense. As it CF, it is not a military model.

I think we can rule out contemporary Zeiss style bins due to the ergonomic form of the prism housing (see left ring finger in the first image).

This one shows the form of the prism housings nicely, but the radius of curvature in the bridge is too small, I think...

I would also rule out the Zeiss/Leitz-style binos and tend to an American oder Japan-made pair of binos.
What about the Swift binos like those used by Chandler Robbins? Have they already been present as early as of 1954?
N

In this pic I see the silver rings behind the objective covers.

For whatever that's worth ... 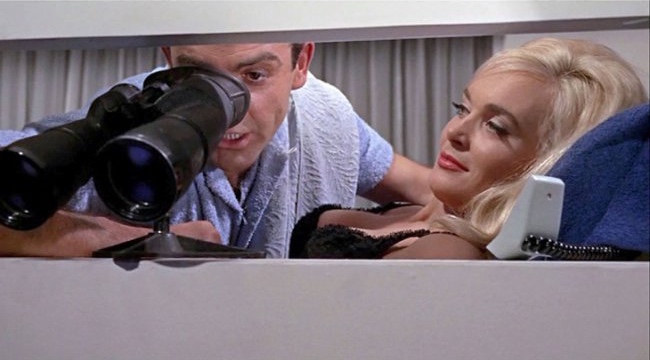 Elmer Fudd, post 1,
Looking at the focussing mechanism I think it is a Bushnell porro binocular 7x50 or 10x50.
Gijs van Ginkel
H

Another observation instrument shown in a movie

I'll take one too! Thermal will make those pesky birdies you heard hiding in the branches stand out like a sore thumb and then just switch to visual and zoom in...

I know, it has been used by tank crews for infantry in the woods for a long time...

Hey, you're hi-jacking my thread...

But it's interesting, although!

R
Some questions about American Robins